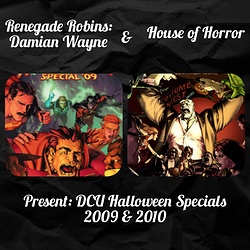 We have a special edition of Renegade Robins: Damian Wayne this week. RENEGADE ROBINS and HOUSE OF HORROR are teaming up and we are proud to present some stories for your Halloween reading pleasure. If these scary tales aren’t enough for you why not head over to HOUSE OF HORROR, a club dedicated to the horror genre of DC titles, to find some other tales of terror to read. They are currently discussing the rest of the stories in the DCU Halloween Specials so be sure to head over there using the above link for more discussion. 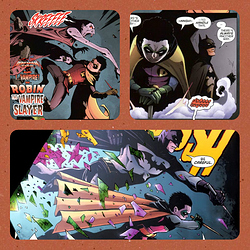 We will be having an open discussion on these stories for this session.

And that’s all for this week folks. Hope you enjoyed these tales of horror.

Next on RR: Red Hood

And in Two Weeks on RR: Damian Wayne

Cavity Search in Halloween Special 09 is a quick little Robin adventure. Admittedly, I am not a fan of Damien Wayne, but this was not a bad story. Granted, it was short and it didn’t feature the elements of Damien that annoy me. I would like to see more of Sugar Tooth but I feel his fate is a one and done character.

Robin the Vampire Slayer in Halloween Special 2010 is a short story but a lot better than Cavity Search. Being honest, I am not too familiar with I…Vampire but I am enjoying the lore that surrounds him. One big difference between Cavity Search and Vampire Slayer is the supporting cast. This felt more like a Batman story with Robin as opposed to a Robin focused story. This isn’t a bad thing but it is odd for the title to focus on Robin the way it did.

Cavity search was a nice story. I liked Damian saving the little girl. Sugar tooth was an interesting criminal. I liked his snapping due to a tragic encounter with the Joker. I thought the punishment of ripping his teeth out was pretty appropriate. One of the better stories in a pretty boring book. I wish it was more Halloween centered though.

Robin the Vampire slayer was pretty good but I did have some issues. I liked the overall story of a tentative alliance with Andrew Bennett, ancient vampire, to stop a vampire cult. I like the fight with the vampires but I do have issue with Batman killing them after telling Damian that there is always another way. Also I wish they could have explained how Andrew was held captive by the cult of the blood red moon.

Lil’Gotham was a cute fish out of water story for Damian on Halloween Day. This was definitely my favorite story of the three. My favorite part was Batman’s trick at the end.

Cavity Search was an okay story, but kind of an “eh” Halloween story – though I suppose part of it is the fact that Gotham is kind of Halloween 24/7 anyway.

“Robin: Vampire Slayer” was fun – cool to see him team up with Andrew Bennett.

The first chapter of “Lil’ Gotham,” however, is definitely the most fun of the three. Dustin Nguyen’s cute chibbi style with his beautiful watercolors are amazing, and the it’s a great kind of all-ages humor and storytelling that just really works.

“Body Cavity” was an okay story and my least favorite. I did like Sugar Tooth though and I agree that it could have been more of a Halloween story bit as @Jay_Kay pointed out Gotham City is pretty much a horror story every day. With Joker and the like around how could it not be.

“Robin: The Vampire Slayer” was a fun little story. I liked the team up with Andrew Bennet a lot. It was also pretty cool to see Batman and Robin facing some vampires. Only in Gotham.

My favorite though was the L’il Gotham story. It was a nice all ages type story and I love Nguyen’s art style. I thought it was a good way to end this session.

Yeah, he pretty much felt like a one and done character to me as well. I would have liked to see more of him though.

I liked his snapping due to a tragic encounter with the Joker.

I thought that was interesting too. Made me wonder how other people in Gotham have handled Joker encounters over the yeats. Are there more like Sugar Tooth out there? Sometimes I wish there were a few more stories focusing on regular Gothamites in the aftermath of various incidents. I think it would make Gotham feel more well rounded. IDK.

I do have issue with Batman killing them after telling Damian that there is always another way.

Well vampires are undead so its not exactly as if the no killing rule is being broken. It could be that Dick (and it would be Dick as Batman in this story, not Bruce) is reminding Damian that they do have a rule they live by as a way of reining in his partners killer instinct.

My favorite part was Batman’s trick at the end

That was my favorite part too.

though I suppose part of it is the fact that Gotham is kind of Halloween 24/7 anyway.

Gotham is rather like one continuous horror story isn’t it? I still say Gotham is sitting on one heck of a Hellmouth.

I was going to joke that Gotham must’ve been built on an ancient Indian burying ground, but then I remembered that’s actually canon.

Indian burial ground or Hellmouth I just want to know which one is responsible for the insanity that is Joker.

I think we all know the answer to that: 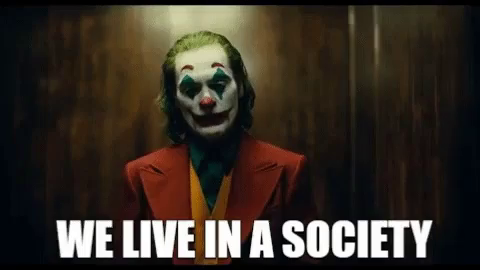