[crashing through wall beside door] As in unnecESSary property damage, bird-girl! 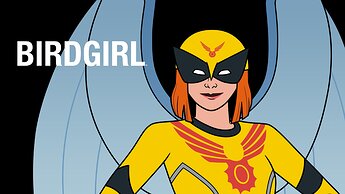 Can you imagine being an insurance underwriter in a comic book universe?

Guys- when you have some time pleez come over to the Batman 89 Movie thread and help us celebrate thirty-three years my most fave DCEU movie OAT.

I liked his JLA more than his Batman

I loved his Batman, and very much wanted to love his Justice League.

Especially since, in the years prior to him getting JL, he was my dream writer for the series.

I liked his run initially, but as it neared Doom War, the whole thing felt to me like a lot of padding, and not particularly interesting padding, despite the fact I generally really enjoy Snyder and love the Justice League.

Venditti’s run was very small, but for me, it got straight to the point and was a lot of fun, from start to finish. Precisely what I wanted Snyder’s run to be.

I might revisit Snyder’s run in the future (especially Doom War as I never finished it) but for now, Venditti is where its at for me.

I’ve known a few women with purple hair (one of whom also had pink, and then a pink/purple mix afterward), and they wore it very well.

I don’t know if this is considered a hot take, but for me Justice League hasn’t been consistently great since New 52. Out of the runs you mentioned I think Snyder’s is the best, but he spent way too much time knocking the team down to set up Death Metal. Bendis didn’t have enough runway and crammed too much into the year & change he was on the book. I generally find Venditi’s writing to be quite forgettable (sorry I know how much you like his work). Spurrier’s arc was just, wierd. Don’t quite remember what the others did. So yeah, out of those, Scott Snyder. That’s the run that gave us this most memorable page (from #25): 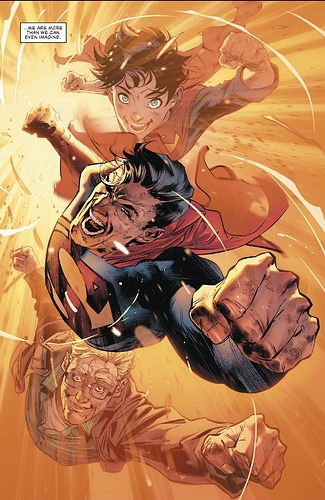 It hasn’t been the home run after home run, giant stakes, window on the DC Universe series that it was during The New 52, I definitely agree.

I think Snyder’s is the best, but he spent way too much time knocking the team down to set up Death Metal.

Don’t quite remember what the others did.

Williamson did the Death Metal tie-in…and then killed everyone at the end of the series.

Williamson did the Death Metal tie-in…and then killed everyone at the end of the series.

Yeah I know that much of course. Way to put your stamp on things Josh; thanks!

Way to put your stamp on things Josh; thanks!

That reminds me of the following from The Simpsons:

Homer (to Marge, as they’re leaving The Empire Strikes Back): “What a movie! Who’d have thought Darth Vader was Luke Skywalker’s father?”

Guy in line: “Oh thank you, Mr. Why I Don’t I Ruin The Movie for Everyone Else?!”

Reminds me of a real life review headline I saw while I was in college for The Sixth Sense: “Bruce Willis: A Ghost”. Luckily I had already watched the movie

That’s how much I want to love his run, no doubt.

Some day, maybe I will.

Does she have to be in the BG suit? I think her best kiss is as Oracle (and with Dick of course, lol).

The Bat books on this list are on top for me, although I’d add Nightwing Year One and Oracle Year One to the group. Outside of the Bat umbrella, Wonder Woman Year One tops my list.

Easily one of the most important books in my collection. 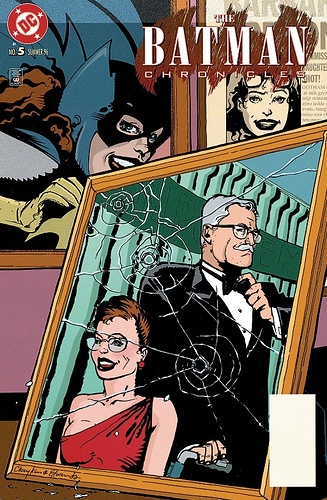 I feel like the ages are all out of wack, although part of this could just be my perception of character ages. Jay seems too old for Jon and gives me creepy vibes not just in romance, but his job. To be fair, I’ve read very little of Jon’s run as I didn’t like it and Jay gets caught up in all that.

As for Damian, I like the character. He’s my preferred character as current Robin. I loved Super Sons. I think Jon and Damian are best friends, whose friendship got interrupted by aging shenanigans. I liked both as kids, partly because they fit in (mostly) unoccupied story space as super kids instead of crowding closer to existing characters. All that to say, I like them as kids, so no romance. The current ages don’t support a romance, and I really don’t want Damian to suddenly be in college. DC could have grown these characters together more naturally and that could have been written with an eventual romance, but they opted for immediate changes.

Tldr, I don’t like any of the romance options Jon’s been given; however, I’m not really an aged up Jon fan. I guess if he has to date, at this point I prefer him dating someone in his own book.

I’ve never been a big JL fan. I loved JLI in the 80’s/90’s, but once it stopped making me laugh… I just didn’t care anymore.

Is that bad? It’s bad, right?? I’m more into LoSH because it is typically self-contained. I dislike events, and DC is very eventful these days.