Pick a Legion of Superheroes Team

Hi. This is going here because I didn’t know where else to put it.

Since there seems to be a bit of a focus on the Legion of Superheroes here in this forum right now, I want to ask people a question:

If you were given the opportunity by DC to create a new version of the Legion (with the only caveats/restrictions being “No duplicate powers” and “no more than 10 members for the first 15 issues”), who would you put on the team, and why?

I’ll share my own thoughts to get the conversation started.

My Legion would be as follows:

So that’s my starter team if I had the chance to “reboot” the Legion. What would everyone else do?

I’ll have to think about this but feel free to also consider joining our Legion Club and to come on over to our Discord clubhouse room as well. The ultimate plan is to have a room on community 2.0 this summer for the legion Club

While I wait to see what other people’s Legion teams would be, I figured I’d post my “second wave” of Legion members:

This is really tough cuz there’re so many others I’d like as well… how about the rest of the Legion fan club what do you think?

Oh I get one more, Colossal Boy!!×

@Don-El: I’m surprised you only included two of the 3 founders.

After I posted my “second wave” group of characters, I decided on four more I wanted to add:

Gates and dragonfly are very cool

I’m going to go call a Legion meeting on this. Only 10 is so tough! I can see now that what I setup is very heavy on the Superman level stuff.

I was looking back over my list, and I realized that I kind of stumbled into some unexpected romantic pairings based on the characters I chose:

To twist the classical take on them being inspired by the 20th century heroes, I would have Kara ending up in the future and inspiring them in their time. There would be no 20th century museum from the start. All that information has been erased to dissuade that kind of behavior. The 30th century is not a place for play and dreams, it’s a place where you work and contribute to the United Planets from the cradle to the grave.

Their first knowledge of the old heroes comes as a young Kryptonian girl arrives and starts telling stories around a campfire. Someone not from around there who knows that something must have gone terribly wrong along the line, and tells stories of a world where people followed their dreams - of pool parties and beaches and clubs, but also of heroes and villains - an event that brings more and more kids as time goes. Among them a brilliant tech kid named Querl who gets curious to the statistical anomaly why so many were given powers before and now suddenly no one, a curiosity that leads him to discover another purpose to the id chip given to all children of the united planets at birth. He decides to try and shut down the grid feeding the chips, something that will change the 30th century forever, for both good and bad.

^ Interesting take on the property.

In terms of an origin story and arcs, my version of the team would more or less ‘ape’ the story structure of the post-Zero-Hour Legion, with an assassination attempt on RJ Brande’s life that is thwarted by Rokk, Imra, Garth, and, in this iteration, Ayla leading to the formation of the team and the recruitment of Luornu and Tinya before Brande attempts to pitch the idea of the Legion being used to ‘supplement’ and ‘support’ the Science Police in the enforcement of peace within the UP and the galaxy at large.

From there, Brin would end up joining the team when Brande took them to Zuun with him to meet with Mar Londo about developing technologies to help them do their job, and President Chu would institute a ‘draft’ that would initially add Querl (as team leader), Chuck, and Salu and then later Reep, Jenni, Lyle, and Tasmia as the team slowly started to uncover a conspiracy to destabilize the UP to the point that martial law would need to be declared by fomenting various crises. This part of the story would also see the group start to gel as a unit despite President Chu’s meddling and deal with foes like the Fatal Five, Tangleweb, and Grimbor.

The next part of the story would see President Chu deposed and replaced by Tinya’s mother Winema, who would end the ‘draft’ and allow RJ and the Legion the autonomy he’d wanted them to have in the first place, leading to a recruitment drive and the addition of Jo, Ti’julk, Jekka, Mysa, and Jan, while a confrontation with the Fatal Five over the Emerald Eye of Ekron would lead to them being stranded in another galaxy and lead to the recruitment of Shikari.

An amazingly interesting question. I have loved so many Legions and their various members, that makes it hard to pick. In the end I went with:
Cosmic Boy
Lightning Lad
Saturn Girl (I don’t think I would ever give up a founder)
Braniac 5 (He is a great way to connect to so many possible story lines and his general attitude makes him a fun choice)
Chameleon ( He is such a great non-Superboy/Monel/Ultra deus ex machina character solves so much just off hand)
Element Lad (What a power set, what a backstory, and probably my favorite male member of the team ever)
Projectra ( the resident princess can connect us to some interesting plotlines and make the politics more interesting)
Timberwolf (as close to the Super set as I will get, he adds some power but with mortality)
Phantom Girl (Just adore the whole ghost who walks thing, kind of fills in the invisible lads roles in some ways)
Dawnstar ( purely a personal choice, I was always fond of her and I think that if you set up a kidnapped Brand story at the start,the first attempt fails due to the founders but the second does not, she could be a great early addition)

It isn’t the strongest or most powerful team, but I think it is a team that has a good mix and some real humanity to it. One that can fail on occasion and learn from it.

I hope you can join us in the clubhouse as well!

Ultra Boy (my favorite as a kid)
Wildfire (cool look, cool power, also one of the more human characters)
Timber Wolf
Shadow Lass she joined the team in one of the first stories I ever read
Lightning Lass
Karate Kid
Laurel Gand
Dawnstar
Vi (yes, a modern love triangle is on my team)
Cosmic Boy

Love the Legion and I’ve always loved all the different groupings each issue here’s a team I’d love to see together in a book, an animated movie, series or a live action movie.

Superman travels to the 31st Century, expecting to meet the Legion.
Instead, he finds a ruined Legion HQ and a galaxy enslaved

Putting clues together, he slowly unravels what happened in the last ten years, leading to the Legion’s defeat and disbanding.
He then sets out to find the members and bring them back together.

I chose to start with the founders and Brainiac 5 because they’re often the core elements of every version.
Then I added the Legion Espionage Squad, as they would be beneficial to fighting the oppressors.
Dawnstar to find everyone, and Gates for transportation.

I’d want to eventually add more of my favorites, which I held back from including for story reasons. 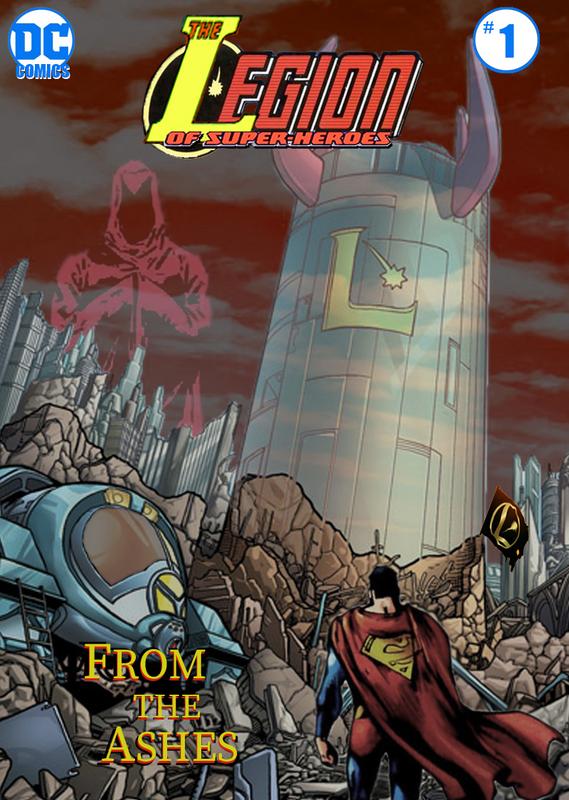 I haven’t read the Legion in awhile even though it is one of my favorite titles and gonna old man on some names because I don’t know all that many of the new ones. Tossing in a few personal faves that aren’t that popular.