We’re back this month with another instalment of the Official DC Book Club! 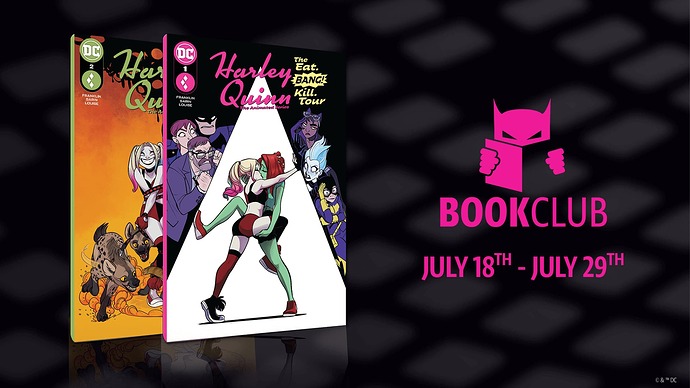 Join us, starting TODAY, in reading Harley Quinn: The Animated Series - The Eat. Bang! Kill. Tour issues #1 and #2! Harley and Ivy receive an incredibly rude interruption to their spontaneous honeymoon across the DCU when a new villain reveals himself. Can the duo defeat this new villain AND escape from Commissioner Gordon in the process? Join us to find out!

Head over to DCUI and check out issues #1 and #2 of Harley Quinn: The Animated Series - The Eat. Bang! Kill. Tour for FREE (as long as you’re a registered user)! We will be posting discussion questions every Monday to prompt you to read further and discuss the storyline with your fellow DC fans.

Here are some discussion questions to get things started:

Of course, we also have some awesome bookmarks and wallpapers for your desktop and mobile devices that you can download for free:

. So ready to discuss when questions are up.

How do you feel about Harley’s conversations with the doctor version of herself? Do you think this keeps her balanced?

I do indeed. Dr. Quinzel has brought clarity to situations for Harls at times when she desperately needed it. I love this storytelling facet.

What do you think of the relationship dynamic between Harley and Ivy? Do you think they have a “healthy” partnership?

To date they’ve got a healthy ship 'cuz each one has the ability to get through to the other, especially when either one of the two find themselves out over their skis on an issue. We saw this in season one when Harl’s was making the mistake of determining her self worth based on whether or not she got the greenlight to join the LOD in HQAS season one. Ive was incredibly patient with her through the process and after Harls had the always important moment of clarity about the situation she was luckily able to make things right with Ive and move onto being her own greatest self. It’ll be interesting to see these tables turned in season 3 as it looks like Ive will be the one over her skis with the whole terraforming Gotham thing and Harls will probably have to talk her down off of that ledge. Wondering how Ive will respond.

Thank you for making these- they’re amaze and I’m gonna’ use 'em for my hardcopy comics! Yay!

Happy Anni, @NYJt3! Thanks for being a wonderful part of this community

God, the Max Sarin art in this series is SO GOOD. They should have a gig lined up with DC for life.

If you loved the incredibly expressive art in this series as much as I did, check out Sarin’s Giant Days!

Happy DCUIversary to you as well, @moro!

You too, Moro! Looks like this is just the day of the true OGs.

Ayy happy anniversary! Thanks for ALL you do! 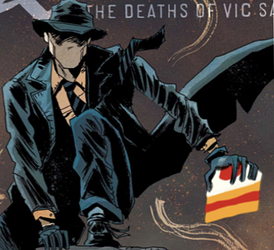 What do you think attracts Ivy and Harley to one another?

This is one of those questions where the answer is self-evident and simultaneously impossible to find. I think that part of it is that Harley kind of… I’m trying to say this as not sounding awful, but… I think that Harley needs to be, or at least feel like, a decision-maker in her relationship. The reason Harley fell in “love” with the Joker in the first place, I think, is that he represents the part of her that she’d been forced to hide all her life, so he was the ultimate “rebellious decision”. But ultimately, he turned out to be the ultimate controlling partner. With Ivy, Harley finally has someone with enough self-esteem that she doesn’t need to be in control all the time. Ironically, I think Harley is for Ivy what she needed the Joker to be for her, but, to put it mildly, he wasn’t. Harley is in reality what the Joker made her think he was, which is why she was so attracted to him. This is what Harley is in her relationship with Ivy: She defies all norms (and laws), and only sometimes does so for selfish personal gain. Harley is - once again, like what she thought the Joker was - a representation of everything about herself that Ivy’s had to suppress for her whole life of… 25 years? 100 years? It’s impossible to tell with plant goddesses. But like all great relationships, Harlivy are both each other’s opposites and duplicates. They share being… Outspoken, to say the least, and both try not to care about what others think, but deep down, crave validation just as much as the image-obsessed Joker.

How do you feel about Harley’s conversations with the doctor version of herself? Do you think this keeps her balanced?

It’s ironic that Harley’s psychotic hallucinations keep her sane (for lack of a better word), but yeah, it’s like that Arrow episode, “Three Ghosts”, where Oliver just needed to figure out what his hallucinations were trying to tell him. Since Harley is so fundamentally broken, her hallucinations will be her primary method of seeing reason for the forseeable future, even if she understands the individual messages.

What do you think of the relationship dynamic between Harley and Ivy? Do you think they have a “healthy” partnership?

I mean… Describe “healthy”. I think they’re both in better places emotionally then they were before they became a couple, so I guess that’ll be good enough for now.

I mean… Harley has been pretty clear about what she wants. She wants someone who loves her in spite of her flaws, not because of them like the Joker did. She wants someone to show her that she’s still capable of love after her relationship with the Joker. She wants someone who she won’t have to “fix”, but who’s emotionally… Wubbled-up… Enough that Harley’s insanity isn’t a turn-off. Ivy is, I think, less certain about why she loves Harley, she’s just relieved that she no longer has to pretend that she doesn’t. She basically gave the whole game away in the first episode, before they even became a couple: She loves her “in a very weird, hard-to-articulate kind of way”. I think once Ivy figures out what she wants, then we’ll see if their goals align.

Who do you think “wears the pants” in the relationship between Ivy and Harley?

Am I old enough to know what this means?

I mean, for now Harley’s obviously the leader, but we’ll see how it goes - Remember, in this comic, they’ve only been together for like, none… And of course, Ivy was the leader back when they were just friends, so the role reversal is ironic and fun, and we’ll see if it evens out in the end.

Happy DCUIversary to you as well

You too, Moro! Looks like this is just the day of the true OGs.

I’ve never been called this before. But now that I have, and by @HubCityQuestion no less, I don’t know… I feel special!

HQTASTEBKT (did I do that right?

) was one of the first comics I saved on DCUI. Love the writing and art for my fave pair!

Unpopular opinion to follow. In reading group, I don’t know if we only have to praise stories, and if so, my apologies. But my honest opinion follows. The series begins with a a destroyed Gotham City, as if that was not only the story line, but also desirable. So I question how “mature” that actually is? I can understand the frustration and anger at anything that represents “authority,” but where does that anarchy actually lead? Or is normalizing destruction a socially non-mature viewpoint?

I have read a number of the Harley Quinn stories, to keep myself informed about the character. I have consistently looked for this character to change. Detective Comics 23.2 was so deeply troubling that I can understand why fans would not refer to this. But more recent comics show Harley and Poison Ivy in killing without consequences. In this series, Gordon is corrupted and becomes the villain for everything that is wrong in “authority.”

What worked with Spider-Man was a character who embraced the concept “with great power comes great responsibility,” and so even when police were wrongly and J.Jonah Jameson madly pursuing Spider-Man, he was out there saving people. His strongest message is right is might. This was the original concept behind Batman and many other costumed “heroes” and “heroines.” Harley Quinn and Poison Ivy may save some people but outside of Detroit, that is mostly by accident. It is a pro-criminal, pro-villain world.

Where do people of every gender, of every race, of identity group stand in a pro-villain world? Does a “eat, bang, kill” headline not send a message to abusers of every kind, that all that matters is might, and that only might is right?