Nightwing fans assemble, we need to have a meeting. 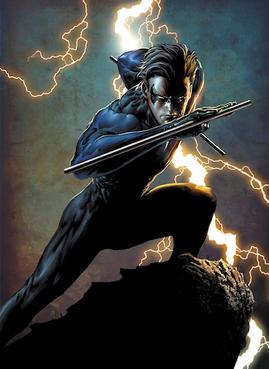 Present. What’s up? Is this a meeting to boycott Ric cuz I’m so down!

Present and accounted for! Does anybody have the minutes from the last meeting?

takes off hat, puts his coat on a hanger, pulls a chair up to the table and sits down

Now, what shall we talk about?

Can someone provide a recap of the last meeting? I seem to recall on whether we prefer Dick’s relationship with Starfire or Batgirl but I can’t say for sure.

Some dude named Ric came in, but he was booed away.

My notes from the last meeting are mostly just incoherent complaining about various bad editorial decisions, but while we’re all here, I’ve got a question:

Who do you consider Nightwing’s second greatest enemy?

Thanks for the recap. I do recall a lot of complaining the more I think about it. Now, personally, I find Nightwing to be so great because he doesn’t necessarily have a greatest enemy. He’s such a versatile character that can be go from a grounded, spy-espionage run to an out of this world adventure. I don’t know it was until recently that we started to see some more repeat and major threats for him (specifically the Court of Owls and Deathstroke). But that’s just me. What about the rest of you?

I’m not overly familiar with Nightwing specific villains so I can’t answer that.

Was Nite-Wing a villain? I remember seeing him in some issues of Nightwing I bought around '99 or '00.

He was a villain, but has really appeared since his introduction in the late 90s, around the time you picked up those issues. Although, I believe he was more so around in '96 or '97.

He was a recurring character in Chuck Dixon’s original run, especially the first 50 or so issues. #51 has his origin and is a pretty good story. And that did run up through the new millennium somewhere in there.

Blockbuster was more prominent as the main villain in that era, though.

They were setting up Shrike to be a major opponent of Nightwing, but he hasnt showed up in years.

Probably Blockbuster. He lasted a long time in the original run, seemed like a major threat on several fronts, and reappeared in Rebirth.

I think Two-Face is more of a Batman villain, but I like how he spans the different eras of Dick being a hero.