New Comics Tuesday: What Did You Get

This topic can be used in the tradition of @Vroom’s weekly new comic topics. Instead of starting a new topic each week, I figured if we can all post on this one topic it will be like a time capsule of excitement and possible let-downs.

Books I picked up:
Justice League 65
Superman: Blue and Red 5
Supergirl: Woman of Tomorrow2
Superman and The Authority 1
Blue and Gold 1
The Flash 772

I have been really excited to get my grubby hands on Blue and Gold 1 and that will probably be the first book I read. There was a bit of a back and forth on Superman and The Authority on if I would buy it but at the end of the day, I decided I couldn’t wait for the DCUI drop to read more Grant Morrison Superman.

What books did you pick up and what are you most excited to read?

I got Supergirl: Woman of Tomorrow 2 and
Superman and The Authority 1

I know its not for everyone, but I’m enjoying Tom King’s take on Supergirl.

And I LOVE me a Superman story written by Grant Morrison, and this one was no different. I’m already sad there are only a few more issues.

Superman & The Authority was a good start to the story. Glad it’s accessible Morrison, not brain twister Morrison. Justice League was pure fun, with a lot of action and a nod or two to the Super Friends cartoons that were a pleasant surprise. Superman Red & Blue I have not read yet, but it’s been a great read so far.

On the fence about the Supergirl series by King.

I’m just about to dig into Superman and The Authority #1. As that one onlooker in Metropolis said in Superman II, “This is gonna be good!”

I got Blue and Gold.

Superman & the Authority #1: pick of the week, “a finer world” where have I seen that before?
Superman: Red & Blue #5: best issue of the series so far
Justice League #65: bonus points for Zan turning into a bucket of water just so Batman can splash him on Aquaman
Nightwing #82: worst issue of Tom Taylor’s run, almost skippable
Flash #772: front half was boring, but picked up when Mr. Terrific arrived
Blue & Gold #1: about what I expected, very good art
Shazam!: much better than Teen Titans Academy from the same writer
Legends of the Dark Knight #3: pretty good arc to start with
Supergirl: Woman of Tomorrow #2: when the highlight is a handwashing lesson, it is time to move on, dropped

Checkmate #2: you will not find out who Daemon Rose is in this issue as he never appears, read Justice League #65 instead

Robin #4: an old friend the fans demanded returns, Damian learns the force, all his “brothers” show up, another good and busy issue

Action Comics #1033: the USA vs. Atlantis part continues to be way more interesting than the slave ship part

Infinite Frontier #3: another good entry as the multiverse tries to go back to “normal”-Pick of the Week

I picked up most of the new DC books. I have read Superman: Son of Kal-El and really enjoyed it. The Huntress book is my most anticipated book but I have a weird feeling that Infinite Frontier 3 will be the book of the week.

I dig this mini. It’s been a fun read during the 50th anniversary of The New Gods and their associated characters.

I read Icon and Rocket #1 on DCUI early yesterday (Tuesday) morning, but I had to have the Darryl Banks variant, as it just pops magnificently (especially when seen in person): 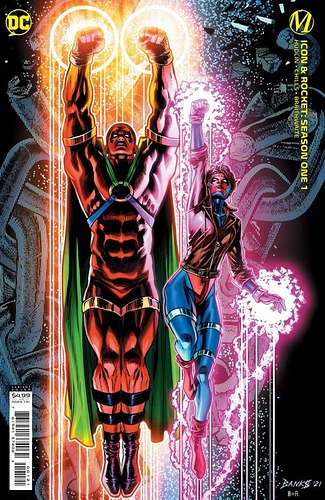 The guy who rang me up at the comic store commented on how nice the above is. Definitely my Variant of the Week.

Infinite Frontier was solid, and Superman: Son of Kal-El…chef’s kiss…a

Between Nightwing and now Superman, Tom Taylor just might be my favorite writer ATM.