@DCBookClub - The struggle of war is widespread, while humanity hides in the shadow of a Green God. Will Swamp Thing meet his end in this battle against the human race? Only one way to find out… 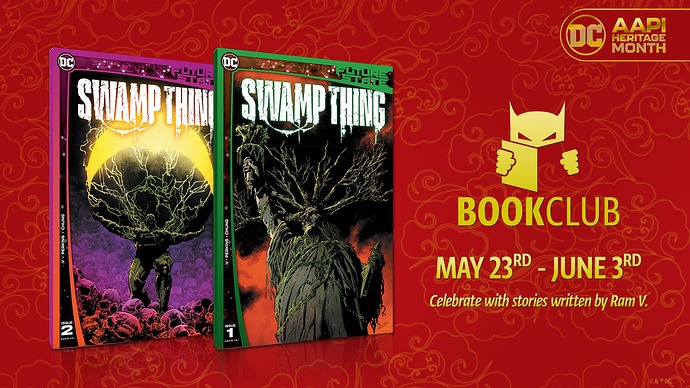 Join us for this month’s Official DC Book Club! In celebration of AAPI month, we’ll be reading Ram V.'s Future State Swamp Thing #1 and #2! From today until June 3rd, read through the first two issues of an epic Swamp Thing story that brings us through a growing clash between humanity and a Green God that rules the planet. **Future State Swamp Thing #1 and #2 are free to read for all registered DCUI users, so dive into these first two issues and come back to this thread for weekly discussion questions!

Here are some discussion questions to kick things off:

As always, what would a DC Book Club be without some awesome digital perks? Check out these awesome Swamp Thing wallpapers and bookmarks!

Don’t forget to join the official DC Book Club… Club to receive notifications for the next book club and much more!

Yeeees!!! I’m super excited for this

coincidently was about to read this for my Future state read through. Perfect timing

I am very excited about this! I read the first issue when it came out and really liked it, but I still haven’t finished the series. Now I have the perfect opportunity.

Cool! Read this before, but looking forward to going through it again.

Yeeees!!! I’m super excited for this

I finished reading the first issue of Future State: Swamp Thing and I’m really digging the storytelling from Ram V!

Hello @Jitsu & @Alec.Holland,
I’ve just finish reading the first issue of Future State Swamp Thing, this was my first time reading this story. Here’s the answer to your questions…

Looking forward to reading issue 2, till next time, have a great day.

I mean, it’s an understandable position, considering, you know…everything in the world right now. However, I don’t know if that’s the complete truth. Violence is definitely the easiest way to create change, but also writhe with unforeseen consequences and distorts what it’s being done for. Change can be done through less violent means, it’s just…way harder to pull off.

Because Swamp T–I mean, Green Father remembers his time as a human. There’s still a part of him, even after all this time after humanity is effectively wiped out, that misses that human side of him, which is probably part of why he’s created facsimiles of humans in plant form.

I imagine we’ll have antagonists in the form of the people in the military base using Obsidian as some sort of doomsday weapon. Other than that, I get the feeling that it’s going to be one of those morally grey stories where everyone is flawed or wrong or messes up in some tragic way.

I think it tracks to an extent. I think it might be more correct in this instance that the threat that came in this story – ecological disaster – was human made, but said disaster is what caused humanity to wane.

I don’t know if “theme” is the right word, but I think a big part of this issue is loneliness and being deceitful to yourself and the consequences it can hold. While I have no doubt that Green Father cares for his creations, but the one darker plant guy is probably not entirely wrong when he says that they’re a replacement for humanity.

General question for the group:

I was a member of the original DC Community book club (The one that stopped updating last June). I haven’t received any emails or notifications from DC Community since the pride reading collection and didn’t know that the book club has been running all year. I’m very happy to learn that the club didn’t end.
How do I make sure I never miss any club-related updates? I’m not very savvy with forum-based social media. I’m only 23, but feel free to explain everything to me like I’m your grandfather

How do I make sure I never miss any club-related updates?

This was actually partly an error on our part! The club’s grown so large that we couldn’t notify all of the members with a tag due to settings on the forums. I’ve fixed that setting and we’ll be using the tag for future instalments of the book club so you shouldn’t miss any of the future months!

Thanks for asking, getting this fixed is super helpful for almost 1,000 people!

I’d been looking forward to reading this series, and it didn’t disappoint. Here are my answers:

On a macro level, there are definitely scientific advancements, such as weapons research, that can be very dangerous to human wellbeing. And on a more micro/personal level, I think social media and constant access to news can lead to “knowing too much” in terms of people losing their privacy and being bombarded with false (or even just depressing/overwhelming) information.

All around solid points! Thanks for sharin’ your perspective on the discussion questions!

Having a soul allows us to be more than our genes or biology.

Love this take! I agree.

Compared to every other living creature we know of in the real world, I would say that Humans are uniquely non-violent. We are able to use our ability to reflect to see the pointlessness of violence in most situations and our incredible capacity for communication to find non-violent solutions. We obviously have achieved the greatest violence of any animal, but that’s because we surpass every other species in most respects.

Really interesting view. Do you think our capacity to avoid violence surpasses our urge to survive? I’ve always felt that humans tend to impulsively choose violence when they (or their possessions) are threatened. Thoughts?