I would probably have never read this but the new Wildstorm Club is rocking it out as the first reading selection.

This is a confusing series when trying to nail down all the weird little tidbits, in the fact it was released by Homage which was an imprint of Wildstorm.

Thank you for the report, @KookieSuperApe - I’ve got this added!

Infinite Crisis: Fight for the Multiverse issue seventeen has the thumbnail for issue six and issue eighteen is showing a broken picture for the thumbnail. Both work fine when read. This is on the site, I can’t check on the app right now.

Also noted that when I come to the end of the series the app crashes.

Hey there, @dariczamora.92958! Welcome to the community.

Batman White Knight Presents Harley Quinn #6 is not loading for me.

The sixth issue of BWKPHQ isn’t on DCUI yet. #5 just hit the app last week, which would be why it’s not loading for you – we don’t have it!

Another issue is that it always suggest Batman White Knight #3 so it’s out of order.

Are you able to elaborate on this with a screenshot? I’m assuming you mean the “Up Next in Series” is suggesting BWK #3 to you, but I don’t know which issue you’re reading that results in this – or if this is even what you’re referring to. 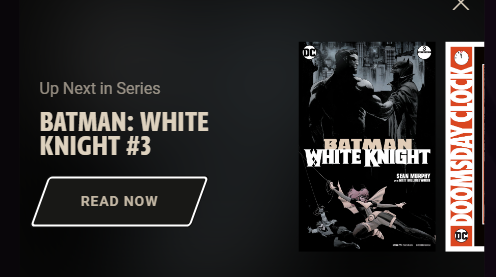 Also noted that when I come to the end of the series the app crashes.

What type of device are you using? And by “end of the series”, are you saying it crashes right at the end of Batman: White Knight #8?

I’m using an IOS device and whenever I finish the last book in any series, the app closes. It made reading the new books for the week annoying since they are each the last in the series. I finally realized if I hit done when the Doctor Multiverse page showed up, I could navigate to the next new book. (Although the archive books (Captain Carrot, Blood Syndicate and Hardware don’t have that page). I have sent in a report.

Thank you for clarifying the issue there. By the sounds of it, this is a widespread issue many people are facing with the mobile app, so we apologize for the inconvenience while it’s being looked into.

I have sent in a report.

Good to hear, and thanks for doing that as well!

For some reason, all of the pages in Underworld Unleashed: Patterns of Fear are out of order. 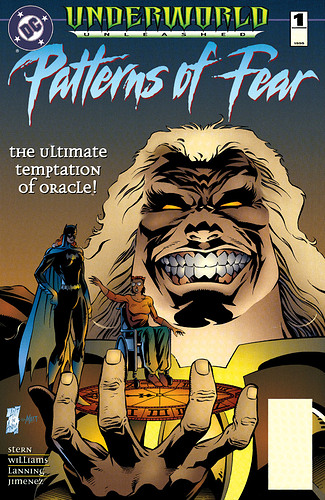 The events of Underworld Unleashed have created a permanent shift in the DC Universe's balance of power. This unusual one-shot tells of one woman's attempt...

Huh. That is … correct. Good catch!

I’ll get that noted for correction then. Thanks for reporting + thanks for including the comic link!

image776×132 28.5 KB
When searched for and found as an individual book, or when selected for reading, there is no “in this series” heading and no “see more” link to get to the “series” page.
Missing options 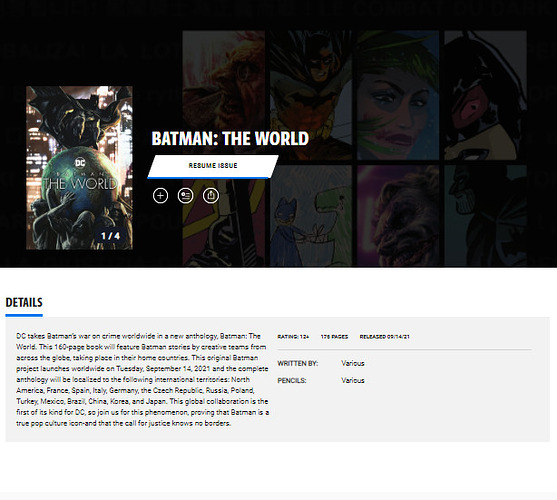 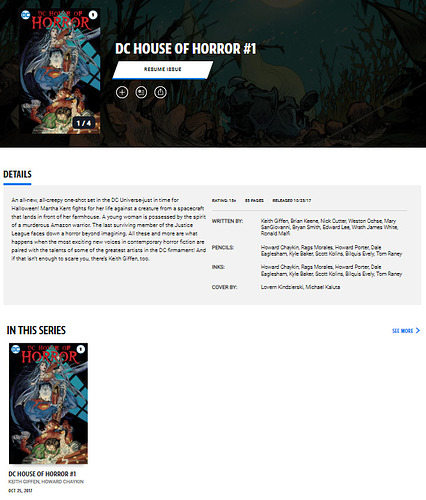 Ah, I can see where the “issues” part may be a typo of some sort. Good eye!

Otherwise, I’m assuming there’s no “In this series” option for it since it’s a book and there are no continuations of it. But that is only my best guest in terms of offering some sort of explanation for why that may be – I’ll get that noted for clarification regardless.

I’ve also noted the missing preview image for that 1-issue Zatanna series. Thank you for reporting all of these!

Fables is missing a series preview image. It also lists there being 149 issues, but I checked and double checked and all 150 issues are present and accounted for.

@dariczamora.92958 Great catch, thank you for the report!

@KookieSuperApe Ah nice callout, thank you for your hard work, as per usual

Thanks for the report @TClone1989! I’ve got this added to the list for the team.

Mister Miracle the Source of Freedom 2 fails to work/load on several devices.