Nikita was an awesome show!

Maggie Q is really inspiring with her products and her healthy living.

@Gibbyhertz
Season 2 is where she gets to be more awesome.

I stopped watching Nikita I think at the last episode of Season 3. Without giving away any spoilers, I think the writers of Nikita made Nikita this unbeatable assassin. I pushed through season 3 hoping someone who beat her, but I could not stand by the decision for the show to reel in the “dough” (Spoiler/nonspoiler- laced word) in such a short time.

I watched all of Nikita, I was satisfied with the ending and then Designated Driver came, which feels sorta like a successor to Nikita in more ways than one.

I know this makes me “that guy” but I love the original French movie La Femme Nikita, and also The USA series

(October 2019, Applejack take note of this prophecy of Nostradon-el!!):

Thank you for coming to our yearly DCU Community Board thread award ceremony. We’re happy so many of the nominees were free to fly out here to Burbank for tonight’s event!

This year’s nominees include: Gibbyhertz for finally posting a thread about a DC Universe actress that wasn’t salacious or like a page out of Maxim and was instead just a great photo of how they appear in real life (remember, this is the future)! Good job, Gibbyhertz, we knew you could start showing the same respect to women that you do men!!! Hurray!!!

I hate this ongoing notion being pushed in this community that just because men think women are sexy that it automatically means they treat women as an object or for nothing other than sexual purposes. That outlook delusional and makes feminism look bad.

Besides that, I’m married and have a daughter, so the irony always seems to betray those who have accusede of such actions (not very many, as most understand that saying someone is sexy or having a crush on them is not generally viewed as abusive, objectifying or disrespectful).

As far as pics, I go usually go with one that grabs my attention, it doesn’t have to be sexy, if there is one that looks best, I’ll use it.

Lastly, about having the same respect for women as men, when have I ever made a misogynistic comment which stated men are better than women? I always will post more about women actresses and characters here because as I said before, I find DC’s women better than the men. So wouldn’t that be the opposite?

I’ve also stated many times that women are to be worshipped and cherished. Somehow this offends the very same people, even though they should agree with that. It’s strange that a straight man appeeciating a female body as art can be twisted in 2019 as something hurtful, violating and negative and yet Venus De Milo is highly praised. Ih the hypocrisy!!! Lol

Here she is today in Swamp Thing. 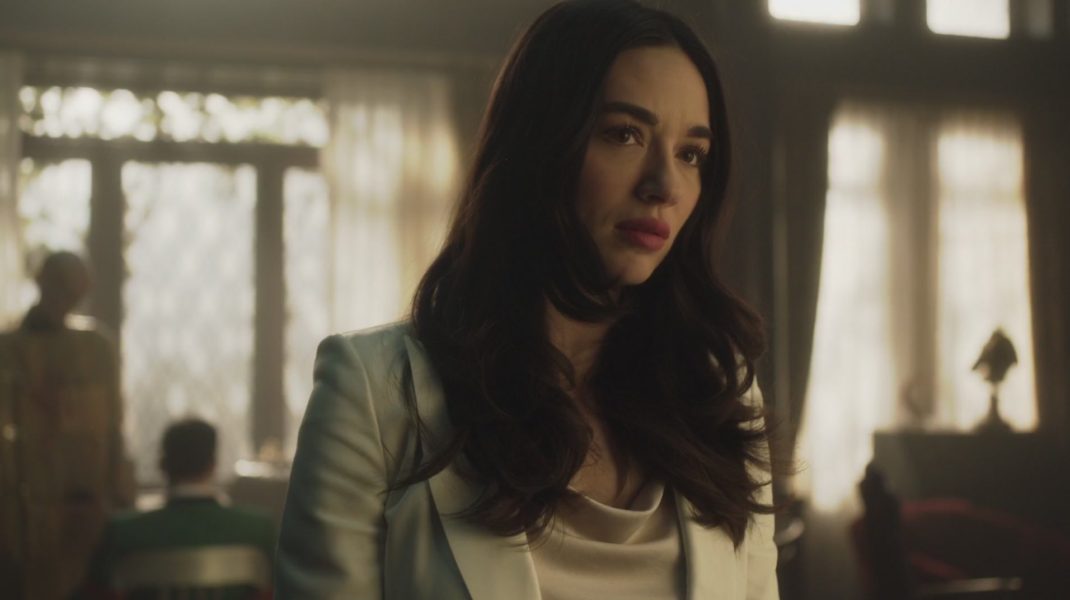 I would love to chat some more about this some time with you, I think it’s an interesting topic and I think it’s about more than just your posts. I think it’s a topic worth discussing in general in the male-dominated superhero comic book culture.

I see males dressed very utilitarian, you know utility belts, bulletproof costumes, prepared for battle. Meanwhile, many female villains or heroines often are dressed more like they’re going to a bathing suit contest then they are going to battle.

I think she’s an amazing actress and person in general. She was the first to introduce herself on set and spoke every time I saw her! (As did Maria Sten) She was always “in the zone” when the cameras rolled and was completely at home here in NC! Nothing but kindness and humility from this great actress!

I know what you mean and I agree what you’re saying. I bought a video game called The Elder Scrolls: Skyrim back when it came out, as soon as it released the modding community replaced the femald character models with anime assets and the armors with bikini and lingerie. I thought that was the stupidest thing ever since that doesn’t fit in the game as everyone else looks normal and fits the scene.

Okay let me ask you this, how do you feel about DC artists/directors hypersexualizing female characters? I’ll give you some examples:

1.) Smallville’s version of Supergirl (Laura Vandervoort) walking around the house in a bikini, then in a bikini again at the Ms. Sweetcorn pageant.

2.) Smallville’s Lois Lane (Erica Durance) being a stripper in an episode.

3.) The Arkham games redesign of Harley into a corset expending her bust, a maid type outfit essentially and the playable dlc comes with the skin-tight original red/black jester suit.

4.) Poison Ivy walking around in her underwear all the time. Even new 52 comics has her fully clothed but still skin tight, not ideal for armor either.

But that’s not it, sometimes it’s the actions of the characters and the tone or what they say as well. Harley pretty much sleeps with everyone - heroes and villains, Livewire uses her sexuality to persuade people more than her powers, Poison Ivy wouldn’t be Poison Ivy if she wasn’t sexualized in a way that made her instantly a threat thanks to her powers.

Point is that just about every DC has had a hypersexualized version of their female characters (specifically female) depending on the writers or artist and most of the time, these fantasy driven versions are the ones that DC fans love more than the others. And then a viewer like me who sees this and says something like “Wow, she looks sexy!” to look like the bad guy to the community. The truth of it is that it’s not really our fault or cosplayer’s fault but the popularized direction from writers and artist or directors alike. This can even be seen in the Birds Of Prey already with people saying that it’s “Sexy and full of seduction” because that’s just what Harley is all about now mainstream wise.

Speaking of, I’d also be interested into seeing what your thoughts are on the film “Joker Rising” in which Riddler is a pimp and Harley is a prostitute. This was all birthed from the fantasy of Harley being a sex symbol to the public and using that for an advantage of story-writing.

Nobody is going to complain about these things but they will take issue with my posts featuring the hot versions of DC’s female characters. I always found that… strange. What are people going to do, skip a comic series because they don’t like a character being over-sex’d? Nope. I guarantee they won’t even complain, they’ll read it and enjoy it just as much as their comics with no sexualized characters. There is also an excuse for fans who don’t like when other fans point this stuff out but there isn’t any excuse for a person who posts about it.

Oh I agree it’s a big ocean of contradictions.

I guess I’m just suggesting simply: please keep posting these admirations of both male and female actors and actresses, but maybe take a few more seconds to look for photos that perhaps are a little more complementary to them has a holistic human being rather than one particular aspect of their persona.

I think one litmus test of whether or not to use the Maxim-style photos is: how many of the female DCU participants join in on these conversations when hot photos of comic book characters and actresses portraying them are posted, and how many stay clear because they’re uncomfortable with it or actually make comments to you about objectification.

On a side note, I recently picked up the first 11 issues of Innovations Lost in Space, Bill Mumy writing some, and it’s just sad almost makes you gobto tears seeing how, as the artist deliberately draw everybody exactly like they look June Lockhart excetera, they made the lead young teenage actress of the show suddenly 4 years older so they could go with the Maxim style portrayal over right down to …I won’t even go into it… Utterly negating the fun and enjoyment of the original 1960s series at least that part of it.

The La Femme Nikita TV show (which aired on USA) wasn’t too bad either. Peta Wilson starred in it. She was also in Superman Returns.

I was a little hesitant with her at first, because she doesn’t have quite the same look I expect with Abby and I haven’t seen her in anything else, but she’s definitely been killing it on the show!

@Vroom, slightly off my man. The US version of Nikita is “Point of No Return”. Its understandable though as both SWF and PONR star Bridget Fonda with short red hair and they came out around the same time. Both are good watches, too

As for Crystal Reed, I think she’s amazing. This is the first thing I’ve seen her in that I’m aware of, but she is absolutely stellar! I believe every word she delivers