This week we’re taking a gallant gander (or a goose) at one of the New 52 launch titles: Legion Lost!

This fun series chronicles the adventures of a group of Legion of Super-Heroes members as they travel back in time to the 21st century to prevent a future cataclysm.

But, ruh roh Shaggy! Their tech conks out and they’re stuck here! Great Scott! What will now become of our future heroes when they’re stuck in their past, our present?

Here’s some dealies to ponder over:

On Dawnstar, Wildfire and Timberwolf! Read on and enjoy friends!

Nice choice! To answer the first question, I do vaguely remember reading the first few issues when this came out, but I don’t remember much about it. Looking forward to going back and giving it a read!

Thank you Jay_Kay! I hope you enjoy your re-read/first read =)

I read these during the New 52 days. This is a dramatic story featuring current versions of the Legion.

The zero issue for a new 52 comic appears after number 12 by the way.

By issue 6 Tom DeFalco starts the writing going forward. I’ve always enjoyed the humanity and warmth of his writing for the other team. 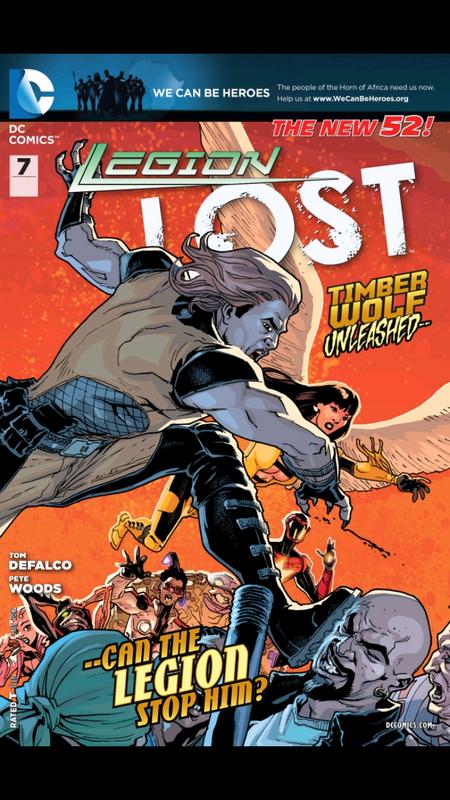 @DE I can hear “Speedy delivery!” from Mr. McFeely right now. Thanks!

Answers to my own questions:

Favorite moment: an odd choice maybe, but I appreciated the slapstick value of Dawnstar when she heaved in the bushes in #1.

I felt bad for her of course too, as she was having a bad time dealing with pollution particulates in the air. Luckily Dawny came out of it a-okay.

Looking forward to what other Legionnaires think

I’ll be sure to finish this before we do our Legion Club watch along next Wednesday at 9 p.m. of the next 2 Legion animated adventures.

Okay, just finished up – overall, I liked this sort of arc to a certain extent. It has a great hook, but I feel like they don’t really resolve it and take advantage of it. Leaving Alistair to just…disappear at the end of #6 was so odd, felt very anti-climatic – it’s almost as if someone wanted everything resolved super-quick so that the characters can be put in place for a cross-over event…

I also found it odd that the book kept talking about how this virus that causes people to have alien DNA combined with their own with destructive results, the Legion keeps talking about how they could be infected and yet after almost a week of exposure, almost nothing happens. We get that weird scene of Timber Wolf shooting out his claws like spikes, but it’s almost not talked about again after that. I think with a story like this, they should have played a bit more with that – really mess with these characters and make the story have an impact.

Have Timber Wolf go straight up werewolf super-beast and he has to contain that form. After Martian Manhunter fixes her, Chameleon Girl has to consume a piece of someone or something to turn into that form – and doing so makes her gain the memories of that person or being and if she stays in the form long enough, she can forget who she is. Tyroc loses the ability to speak, so he has to use the soundwaves of people and things around him in order to communicate. Gates slowly loses pieces of himself every time he teleports. In a dramatic bit of irony, Wildfire gains a humanoid body while controlling the anti-matter energies, but feels immense guilt that the thing that made him feel whole for the first time in a long time is making his friends suffer.

I dunno, just thoughts that came to mind. I think there’s something cool here, it just didn’t seem to have the time or thought to really go through with it, if that makes sense.

Now onto the questions:

I think a lof of the characters here have at least a cool moment to shine, but I think my favorite character and moment is with Tellus, when he’s communing with the girl in the coma. I like the idea of how this big, hulking, monsterous looking creature is probably the most empathetic and wise of them all.

“3. Put yourself in these Legionnaires’ fancy future footwear: what would you do if you were stuck in the distant past?”

You mean like a thousand years in the past like they are? Oh I would die. Straight up. If the internet withdrawal doesn’t do it, the back-breaking labor would do it. Also, wasn’t World War One happening at that time? I’d probably die there. I imagine most of the Legion would think the same thing about time travel. They’d look at it like a lot of people look at New York City – you may want to visit, but you’d sure as hell not want to live there.

Yuppers, lovin that New 52 shorter comic format, rippin on through the assignment from Chairperson Vroom!

Yes, I spent a lot of hard cash on the New 52 explosion, including at least the first few issues of this series. At the time, New 52 was unprecedented in its scope; an entire fictional cohesive world blasting out in 52 new series, with everyone but Mr. and Ms. Kitchen Sink coming in to assist with writing or art chores! A fantastic time for both the eager reader as well as the creative community.

So…This came out at the very same time that the New 52 Legion of Super-Heroes came out. That helps explain why the 1st generation Legion heroes are missing here; all of these Legion Lost cast are from the decades that followed the establishment of the Legion in the late '50s and through the '60s. Many of these Legion Lost heroes are fan-favorites like Dawnstar and Timber Wolf and Wildfire, and then you have what I would term 3rd and 4th generation heroes like Chameleon Girl, Gates, Tellus and Tyroc.

the first two action-packed issues are slim on explaining fully what happened in the future before they get stuck in our present. I would have enjoyed the first two issues just digging into that 31st Century battle that went so poorly and tragically that results in this disjointed mission.

I like the pathos that is being developed here with these heroes who failed to complete their mission properly in the future, and now are continuing to fumble things in the past. It reminds me of the background sadness in the movie Logan. You keep going, but the passion and belief have died down considerably.

Thanks for the comments so far kids =)

One of my favorite moments in these issues is in #3, specifically Timberwolf’s reaction to Tyroc after he complimented Tellus on disguising the team from the hotel maid:

Just a small thing that made me smile. That and Timberwolf’s “Kiss my nass, I knew it!”. Again, it’s the small things.

It’s a little dumb, but I love the made-up swear words in sci-fi universes.

@Jay_Kay Right fracking on! So do I! They’re the shazbot.

Times like this make you wish for one of those Legion Time Bubbles!