The once a month Wednesday [Legion Fan Club] 6 pm Pacific / 9 pm Eastern Watch-Along is back again, a week later than usual but rich as always in pure superhero entertainment excellence!! 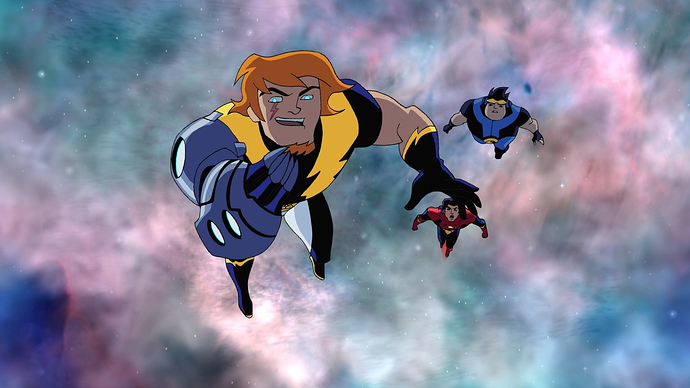 We’ll launch the recordings in perfect unison like a precision marching band at the appointed time!

S2:E3 — Cry Wolf DC Universe
After seemingly being framed for an attack against his father, Timber Wolf must escape Legion custody and track down the real assassin, while being both hunted and aided by various teammates.

S2:E4 — Chained Lightning DC Universe
Lightning Lad discovers that his sister, Ayla, long thought to be lost in the same Lightning Beast attack that gave him and his brother, Mekt, their powers, is really alive, but in the form of pure electromagnetic energy. Lightning Lad must find a way to save Ayla before Imperiex can harness this energy for his own use.

**2 short episodes = a fun way to celebrate the halfway point of the week!!! Join the Legion Fan Club as we celebrate an optimistic vision of the future! *

Hope to see you Wednesday night as we stand as one Legion against Imperiex!!!*

Legion WAL this week, Legion #3 next week, it’s definitely a good time to be a Legion fan.

We all have other series and characters we love at DC, but having Legion disappear for around 7 years was like missing a front tooth- they’ve been around since many of the other beloved DC Silver Age characters, published consistently across the decades more than many from back then. Super to see them on the comic book racks, real and digital, again!

Oh hey… It’s only Tuesday. Here I am thinking I might miss this party and I’m here early. Be back in 24

Assuming the skies don’t turn red tonight, please join us for our fun 45-minute watchalong of Legion animated goodness at 6 p.m. Pacific / 9 p.m. Eastern / 8 p.m. Central and we’re not sure what time it is in Arizona!

Some of the folks that were involved with Young Justice the past year were also writing and managing Season 2 of Legion of Super-heroes that we’re watching once a month this year, so you know you might want to bring a handkerchief with you, things could get dark!

puts a “reserved” notice on his chair

we’re not sure what time it is in Arizona!

We’re often not sure of the time there either.

an hour and 35 minutes before showtime. I wonder if @nu52 , @AquamonC137 , @AntLeon can make it? I see the rest of the welcome crowd of LoSH fans have stopped by earlier, thanks all!

Thanks for the mention, but i will not be able to make it since showtime is when i am s’posed to be clocking in at my filthy job because the mortgage don’t pay itself even tho i like these weird 3rd shift hours.

yes! so glad you @ me I totally forgot!

Are you on break between semesters?

All queued up at this end, Roku on 56" TV, Android tablet for attempting to keep up with you youngsters…