For our Week 13 Legion of Super-Heroes Club Weekly Reader Book Club agenda, trend-setting club that the Legion Club is, we finally dare to peek at the first Keith Giffen work for Legion with Paul Levitz, circa 1982.

THE LEGION OF SUPER-HEROES (1980-) Annual #1 An old Legion of Super-Heroes villain returns! A young girl in the Legion medical bay suddenly awakens and begins taking control of the team’s computer systems.
https://www.dcuniverse.com/comics/book/the-legion-of-super-heroes-annual-1982-1/0fec0000-436e-4ee4-b12b-9e0e8dabe525

Our “extra credit” reading this week: There are three issues just prior to the Great Darkness storyline featuring Paul Levitz and the “new Legion era” with Pat Broderick as artist (the credits also note some sort of Keith Giffen presence, but the comic books themselves don’t state this).

Next week, we revisit the 2010 run with Earth-Man and evil shape-changing aliens (Durlans)!

Awww hell yes! So looking forward to cracking into this – I think it’s fair to say that this is without a doubt the most iconic story of the Legion. I vaguely remember reading this story before, but looking forward to reading it again.

Giffen’s artwork here reminds me so much of the wild work he did in the Defenders issues 42 through 49 , circa 1976.

To listen to the weekly DC Universe Fans podcast where all things Legion are usually part of the fun, go to: https://play.google.com/music/listen#/ps/Ivfhgpjolrxq76evo4ht4nn27du

According to The Flash, you can’t stop it!

Okay, Legion didn’t take over the Con this year, probably cuz it’s going to be released so soon, but we did get tidbits:

It’s easy to see why this version of the Legion is so popular and renowned. The Levitz-Giffen machine is new here and just starting to jell, and there’s energy and magic already! Most Legion issues we have read so far divide up the team and tell two or three stories in one issue, much like the early Justice League stories read n the early '60s. But usually there is only a little action with lots of plot twists and mysteries to solve- not here. Instead, each issue is bounding around in action and tension, with the reader at the edge of their seat wondering how the team will survive this time (and realizing as Blok indicates…they don’t always).

At times the dialogue read a little like the narrator suddenly possessed the character, kind of a Roy Thomas feel in places where the flow didn’t seem natural and was just there to catch us up or explain quickly a plot point so the story could rush on, but overall again, it’s amazing to witness how quickly this writer / artist team get up to speed with each other’s styles.

Today is the last day that we are promoting this particular ( and wildly popular) Legion reading selection.

Please free to join in and let us know your thoughts after you get a chance to review the selection.

Legion of Superheroes (1980-) #289
The slam-bang conclusion of the Espionage Team being stranded on the ice world with no way out! Apparently when folks get real real cold, unforeseen romantic feelings can evolve, even where they weren’t sought previous to the cold! Alas poor Saturn Girl.

The last panel that entices us to read the “first Legion Annual ever”…hmmm…here it is. 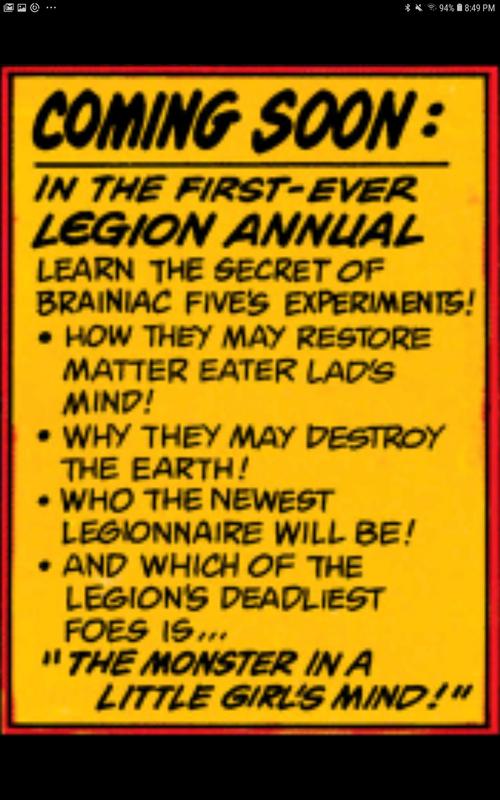 The very very old and original Legion villain Computo returns, and it’s all Brainiac’s fault! Everything literally comes apart in this adventure, and wow is everyone ever banged up!!

In the background, a being that appears to be Darkseid come back to life is sending entities around the galaxy and in particular to Earth looking for energy sources apparently to help him get back to full strength.

I found this tidbit about Green Lantern Corp still being around for this iteration of the Legion, but not at all welcome to ever return to Earth, no matter how dire the circumstances!!

Anyone else have thoughts on this first half of “The Great Darkness Saga?” 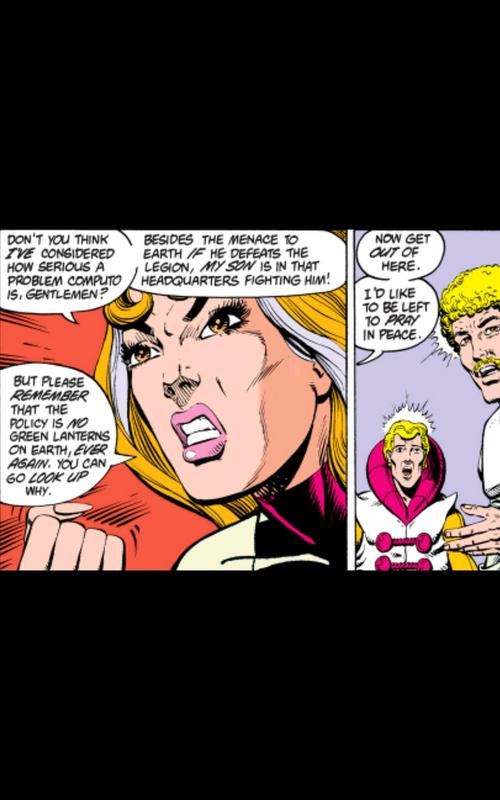 Just finished it all, definitely an amazing start. You can definitely see why this is considered one of the iconic Legion stories so far.

Each issue succeeds at juggling all these different plot points around very effectively while giving a unique threat to each one. You can definitely take notes on effective serial storytelling with these issues. And while Keith Giffen’s art is definitely the highlight, the art from the other artists are also pretty strong as well.

One thing I was struck by and something that did bother me a little are some of the overblown romance elements. Like, Timber Wolf and Light Lass were really…weird as a couple, like especially on Ayla’s side she seemed both equally co-dependent and annoyed by him, which just didn’t feel like a healthy relationship (it could also be that I like her relationship with Shrinking Violet better, so I could be biased). And then when you add in some weird sexual tension between Timber Wolf and Saturn Girl…it just felt like an annoying distraction from the really interesting stuff – and I say that as someone who often like romance in superhero stories.

But outside of that, great stuff. I gotta say, it’s gonna be tough to hold off on finishing up this story for a later book club!

The other thing I thought of while reading it…reading this on its own, it’s surprising that Chameleon Boy ever gets to be Espionage Team leader again. Like…wow, that is a monumental screw-up, all because he can’t handle his Daddy Issues.

Some of my favorite panels and/or stuff that made me chuckle.

First off, now that’s the most heavy metal wedding I have ever seen.

Seriously, the layouts and the way he spreads the page in these early works is gorgeous to look at. While I can appreciate his Kirby like style of today, I feel like this is more unique and interesting from him. 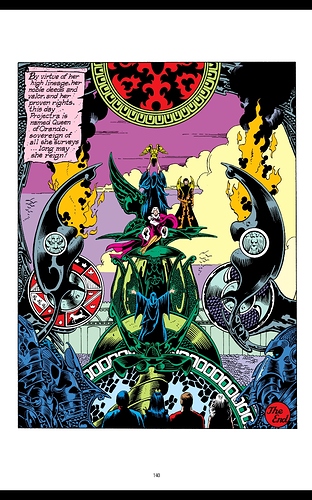 One pig the best things about the Legion is the crazy alien designs they can just throw out there. 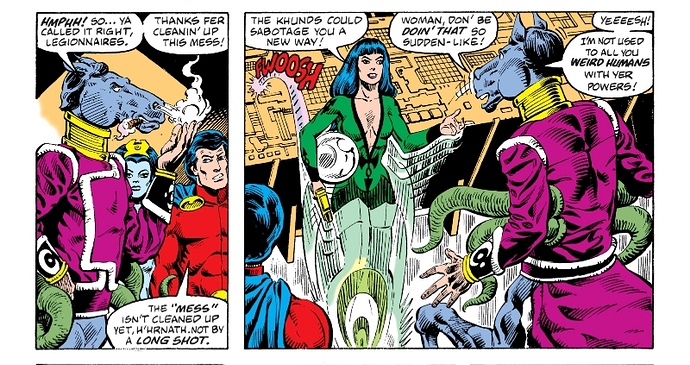 While I can see where Levitz/Giffen are going with this, and it works out well with the fight on Orando later, this feels… wrong to habe the flight ring have that kind of power. Is it just me? 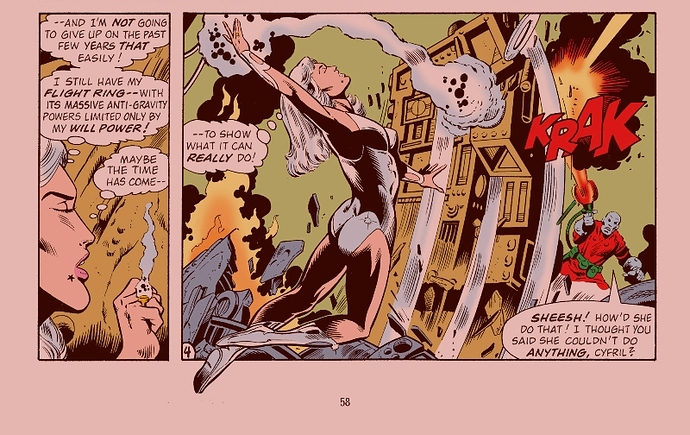 Is this the first time that they use the symbols to represent the Legion like this?

Also, fun fact – Johnathan Hickman of FF, Avengers and soon X-Men fame had said that he’s a huge fan of the Legion and that his Avengers Machine was inspired by it.