Here it is for those who don’t know what in talking about. 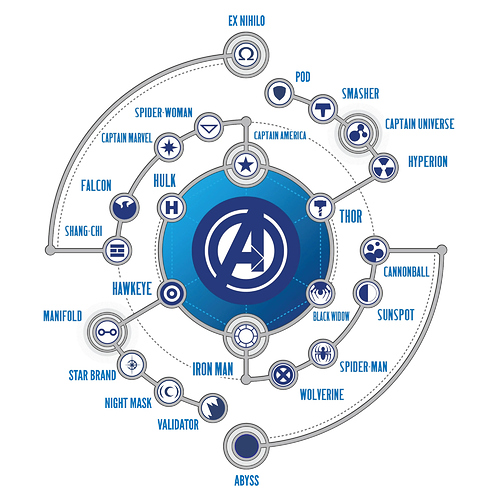 I’m half convinced they did this crash landing story at least partly so they can get rid of Saturn Girl’s disco bikini costume.

Related to that, very happy this story also gets rid of Cosmic Boy’s awful Chippendales costume. I like me some beefcake, but that costume was just straight up uggo. 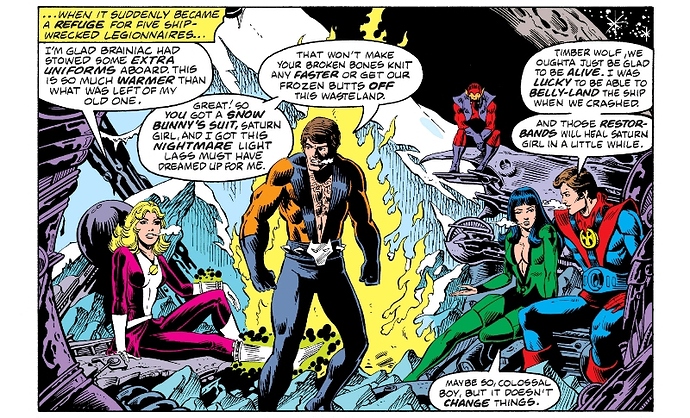 This Annual does some great character work for Brainiac 5. In past book clubs I th n he often only comes off as very jerkish or even unfeeling, but this story shows the great amount of compassion and desire for atonement that I think is crucial to his character, 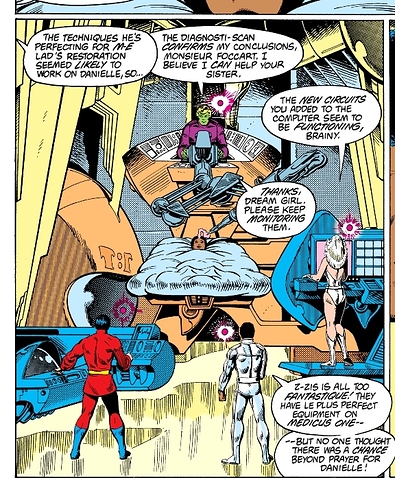 Thanks Jay_Kay. I think you and I can keep busy with these other Book Clubs until we get to the second half of the Great Darkness Saga hahaha…

In general there’s no question that if you get a bunch of people between 18 and 22 in a room together for a couple years I suspect it’s going to be one or two romances and some of them are going to be a little bizarre no doubt, pol. I also noticed the very interesting relationship the writers decided to have fun with between Shrinking Violet and Colossal Boy…now what couple does that remind me of on the Avengers side, hmmm?

I agree with the scene where the ring had some willpower “anti-gravity power” concept …that was I think just an experiment that they dropped very quickly, along with what you noticed on the monitors with everybody having their own symbol …with 24 plus members that might get a little tedious on a screen.
Just look at the lineup of Legion on page 1 of that first Annual, they made sure to celebrate just about every character that you think of in that annual.

Of course that really wasn’t the first Annual of Legion stories, but it was the first original story Annual.

The new weekly reading for Legion will be posted around noon Eastern today.

We are going to hop in the time bubble and jump up 30 years again!

Remind me again, whose idea was it to give 17 year olds a Time bubble?

A legion club got started while I was devouring comics? Man, I love me some legion. Great darkness saga is sprocking awesome.

djd187.81432 , we were wondering where you were! Welcome aboard, feel free to look up the former posts too at your leisure. I also have them all in a library here:
https://discord.gg/zwh5KPE

I’m about to post this week’s reading. We also do a monthly watchalong over in the Movies section the first Wednesday night of every month.

Awesome will do. I went nuts on legions when they added em but I’m excited to read any that I haven’t. Those 80’s ones are phenomenal I believe it’s ‘87. Such good writing in those.

Legion of Super-Heroes Annual #1 is still the best single Legion issue I’ve ever read. It is also the story I recommend to people that have never read an issue of the team before.

Shvaughn Erin’s introduction is done very well and you get to see the entire team. There is the return of one of the Legion’s greatest villains, invented by one of the Legionnaires. The way Levitz brought him back was outstanding. Jacques Foccart’s heroism in risking his life to save his sister is what the Legion is all about. I was happy to see many years later that Danielle also had a heroic future.

I also wanted to know about what happened with the Green Lantern Corps at the time, but I had to wait over a decade to read #295.

Well stated I’m in full agreement. Paul Levitz just upped his game by 10 when he started the Great Darkness Saga. I’m still unclear how much influence Keith Giffen had on the storylines at this point.

Of course the other big big event in this fat annual is: Cosmic Boy finally got a uniform upgrade that actually provided clothing for him and warmth (I also want to quickly note “sticker shock” on the price. I spent a lot of my childhood allowance in the mid-sixties on 25-cent Annuals at the newsstand. They were big and fat and full of reading …and all the sudden 15 years or so later I’m paying a buck??? 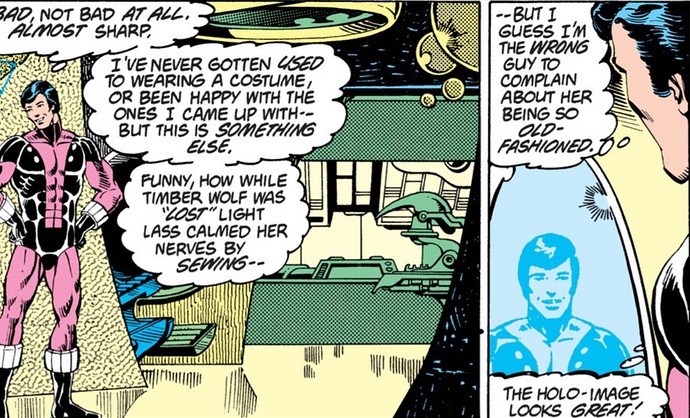 @MisfitCMJ Did you like the new Cosmic Boy costume at the time this came out, or were you still yearning for the older “modern” bare-shouldered one?

No, I think super-heroes should be dressed. At this point, Paul Levitz was surprising Keith Giffen by listening to his thoughts, ideas and plot notions-- but Levitz was making all the desicions.