LAST WEEK: John barely survived an ordinary Halloween funhouse! The footprints in the sand were MANNY! And Zed was TOO BUSY for us I guess.

If this is your first Watch-Along, here’s how it works, squire: on Saturday, June 22nd, queue up Constantine SEASON 1, EPISODE 7 on whatever device you use to watch DC Universe streaming content, and the moment your clock strikes 9:30pm PST/12:30am EST, press play! Then watch it unfold with your fellow members and comment with us, live, here in this very thread!

Everyone is welcome! So come! Watch! Chit! Chat! Be therrrrrrre!

The electricity went out and I just sat in a pitch black room for 3 hours, alone, wondering what funny and insightful things you guys would say about it

Now that we’re halfway through, I was thinking about some ideas for LNWAs to come. My top ten candidates:

I specifically picked material which will most likely benefit from delirious sleep deprivation while watching.

I didn’t even know The Spirit existed*! And I’ve never seen Birds of Prey, and I’ve been meaning to rewatch Superman IV. I don’t think I’ve seen it since the theater. I’m excited!!!

I own the Frank Miller one on Blu-ray*
**Judge me, I deserve it

@biff_pow can I hire you to do graphic design work for me? Your pictures are a delight. High fives are my primary form of payment, but there’s Chex Mix and MST marathons too.

i don’t know what you mean, that’s just a candid photo of actor Matt Ryan enjoying a beverage which I found online. I can’t resist a high five Chex mix MST party, though, and I think next week’s graphic will earn me a raise! High eights, or even tens!

John is the best in Legends of Tomorrow!

@biff_pow There may be copious amounts of Beastie Boys on rotation at the Official DCU High Fives Chex Mix MST3K Marathon Party.

That work for you?

@elpollo29 I agree! I love him surrounded by the rest of the team’s wackiness.

I TRIED watching Legends of the Super-Heroes.

It’ll be better with a group.

I had Legends of the Super Heroes on DVD a long time ago. I always meant to watch it, just never did. If the time works, I’d be in for that.

We could do Constantine: City of Demons as an option but that’s on CW Seed, so…

Would the Mayhem of the Music Meister episode of Batman: The Brave and The Bold lend itself to a late evening/early morning viewing?

City of Demons could work since CW Seed is free and right now Watch-Alongs need two devices. Hopefully one day DC Universe will support a video with live chat option.

Being that it’s my all time favorite show and she’s my absolute favorite character, I would love to do a Wonder Woman watch along. Another great late watch would be Swamp Thing, but it might be hard for commenting with the sad state of the cancellation. Maybe pick episodes of different shows that have a horror motif (WW has a seance episode and one that strongly resembles War of the Worlds, Lois & Clark have the

with Drew Carey, Flash and Birds of Prey have a few good choices as well).

I’m just brainstorming, but @movieaddict are you available in the day at any time on Sundays?

I’m just brainstorming, but @movieaddict are you available in the day at any time on Sundays?

EXCLUSIVE: I put this together last month because I love branding and horror hosts and colors and fonts, but decided not to use it 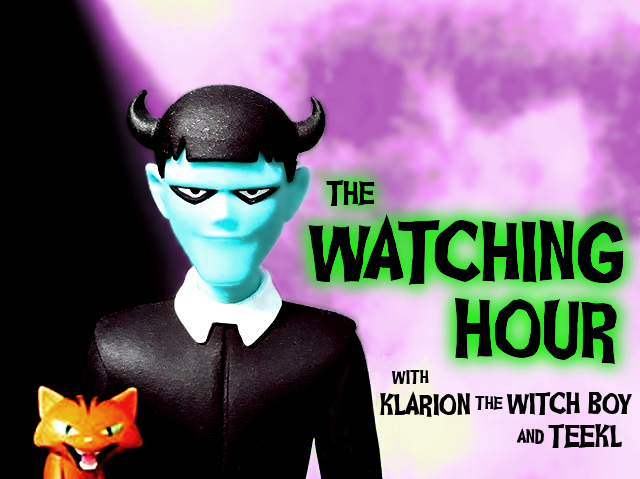 I should have put the name up for a vote, anyway! The Watching Hour was the first thing I came up with.