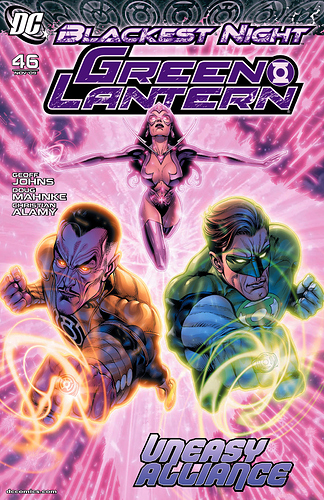 When i see scenes like the one of Smallville in ruins, I always think about… “Who pays for this?” Is a good thing Supermans from there so his powers can assist in the rebuilding!I
My favorite part of the Superman issue was Ma Kent losing it at the end. Her reaching her breaking point and snapping was amazing to see.
I love this side story almost as much as the core Blackest Night storyline!

I’m Pumped to sit down and read these. It’s been really cool rereading this in issue form rather then the Sectioned TP Vol.s I have.

Enjoyed all the issues this week. Favorite parts are always the Black Lantern vision, seeing multiple emotions color various people. Also exciting to watch the emotions of people like Connor change as situations arise. And how the dead bait the living into emotions, great stuff.

All the issues really dial up the hopelessness with how difficult the risen are to deal with. Adding in the zombie bite to Donna makes them more terrifying. However, Dove managing to suppress emotion in the scenario is surprising.

Having the predator escape just adds to the problems. Not sure if readers know what it is yet, but something quite powerful is now roaming free whole a universal zombie apocalypse is going on.

I’m like the Kid doing homework before the class starts!!!

Psycho Pirate is a SCARY Black Lantern, considering his ability to project emotions on people, with the Black Lanterns need to feed on emotions…Its like being able to “Season Your Food”!

This week was a good read with a bunch of Important Core info.
Dove’s ability to mask her emotions from Black Lanterns is great to see, and, in my opinion IT HAS got to part of the ultimate resolution.

Donna getting bit buy her Own Zombie Child, the reaction a bite has, and the predators release all are just added problems. It is why I love G.Johns writing so much! I once read Johns would leave cliff hangers he had no idea how he was going to write himself out of until he sat down to write the next issue. Sorta letting his fantasy play out organically. It’s crazy that MORE problems keep popping up other than the half mystery of the Blackest Night Prophecy.

Sinestro confronting Abin Sur and his family is awesome, writing in that not only were Sinestro and Abin the closest of friends, but that Sinestro was ACTUALLY involved, in a very personal way with Arin Sur, and thus Abin in an intimate way OUTSIDE being brother’s in Arm’s. It again reminds us that Thaal was ONCE one of the greatest green lanterns!
Having to confront the empty, soulless shells of your lost loved ones is NUTS!

I know, still crazy behind!

I think I will give it to Green Lantern this week. Enjoyed the way that Hal and the other Lanterns interacted with each other, and start to see some of the plot move forward.

I had forgotten about Donna being bit by her zombie baby. That’s…an odd choice, considering that it’s never established anywhere that bites can work like that with Black Lanterns.

Not particularly. Maybe a little rude, but the other Sinestro Corps really didn’t factor much to me in these issues.