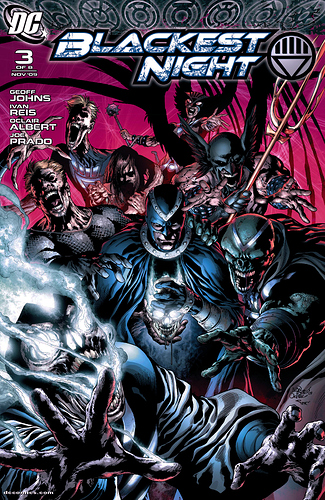 I have to say

I love the way the Black Lantern Power Level keeps rising with each kill! It’s like a kill counter in a Comic Book!

Loved the bit where Atom examines the black rings. The structure of it and the idea that all the energy is being siphoned back to somewhere else just dials up the tension. There’s something big out there and it’s over half-way to 100%!

Also enjoyed the Indigo’s coming into the scene. Their laying out the full setting of all the colors gives a succinct and informative structure that any new readers need to know to understand all the players that are in the game at the moment. Plus their language being explicitly indecipherable makes them extra mysterious.

Making Jason watch as his girlfriend is turned to salt was insane! Deathstorm is such an evil bad guy, it’s great!

I’m not at all familiar with the Adventure comics or Superboy-Prime, but those were really good issues. The comics being used to show the future and everything was fun to see. The progression of Superboy getting a black ring and going through all the emotions, which somehow the ring managed to function as those colored rings. The ending with the girl I’m assuming as his love interest that he killed coming back as if he will get a happy ending.

I might just have to go back and start at #1 of those.

So fun fact about that adventure comics issue.
The store and employees where actually based off of Jetpack Comics in Rochester NH. The employees were Ralph and Al. I actually have proof of this lol.

As far as were we are in the story line.
Things starting to pick up and your right @BigGLfan that panel was creepy and just insane.

@PR0FESS0RZ00M I know it’s almost like a reverse clock counting up until the explosion.

[quote=“Ion2814, post:6, topic:1194774”]
The store and employees where actually based off of Jetpack Comics in Rochester NH. The employees were Ralph and Al. I actually have proof of this lol.
[/quote].
I was wondering if those were artists renditions of actual employees. That’s a nice little Easter egg for those folks!

Wasn’t terribly impressed by the Justice League issue. I suppose it works at showing how everyone is dead and the League is struggling, but I’d say it left me “whelmed” at best.

Between this club and the Legion, it was certainly a prime time this week for Superboy.

Dear [Legion Fan Club], the time has finally arrived! You have passed your exams with flying colors and are now ready to take on one of the most exciting and intriguing stories perhaps in all of the many decades of Legion legend: this very day, we take you to: Final Crisis: Legion Of Three Worlds (2008-) #1-5 Geoff Johns / George Perez!!! Superboy-Prime and the Legion of Super-Villains engage in an all-out war with the Legions of Three Worlds! [superboy prime] The Time Trapper constantly …

This week’s was a KILLER week!

Blackest Night #3 Was Sick with the Firestorms Fighting and Jason Ending up in some Black Ring Firestorm Matrix with Rodney. Then it ends with:

The Adventure Comic’s were BOTH AMAZING. Superboy Prime Ending up with a Reborn Laurie! Although the Black Rign on her finger saying Hope was a bit confusing, I’m used to Superboy Prime Confusing me though…

AND JLA #38! The remain JLA, like melting Plas! feels like they are the B team, they fight Despero, lose, And Zatanna Saves the Days and in 1 PAGE, it become a Blackest Night Tie in! Great Comic.

GOOD WEEK! Happy to be all caught up!

I think I’ll go with the Justice League issue and how it kinda-sorta-but-really-didn’t address the fallout of the infamous Justice League: Cry for Justice miniseries. Mind you, that wasn’t really a GOOD surprise, it was more like the surprise you get when you drink a glass of milk and the smell hits you just before it goes in your mouth and you realize it’s rotten and you just spit up and revile.

Not really a fan of Cry for Justice, in case you can’t tell.

He has a storied past, to say the least. I think he’s an interesting character to examine fan culture and expectations within the community. The issues here kind of spell it out: Superboy Prime is what happens when you let your love be tainted by avarice and anger.

I love the way the Black Lantern Power Level keeps rising with each kill! It’s like a kill counter in a Comic Book!

It also helps to set up the timeline for where each book takes place during the event, at least early on.

Also enjoyed the Indigo’s coming into the scene. Their laying out the full setting of all the colors gives a succinct and informative structure that any new readers need to know to understand all the players that are in the game at the moment.

I liked that scene as well as a succinct “here’s the things you missed if you’re just coming in.” I’ve also liked how Ivan Reis has utilized the sort of centerfold double page spread to really set scale for big moments throughout the series.

I liked the scene in theory, though I do think it kind of hits on one of Johns’ shortcomings as a writer at times, in that his dialogue sometimes doesn’t come off as authentic dialogue, and more like explain motivations at each other.

Making Jason watch as his girlfriend is turned to salt was insane!

Unless I’m forgetting something else that happens, I think this is definitely the most horrific death in the entire event.