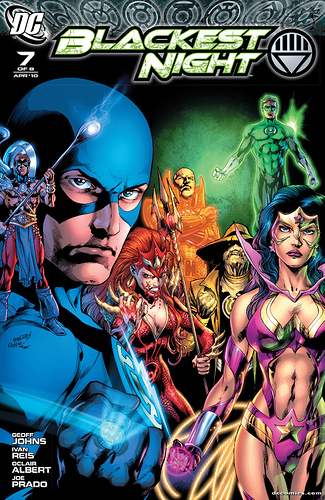 This weeks lineup is EPIC. Parallax vs Spectre. Spectre going red for a bit and then confronting Nekron. Mogo’s leeches! shudder. Lex embracing the orange ring. The corps converging to the Earth battle. Ganthet getting disemboweled by Nekron. White Lantern Sinestro?!

Alright, I remembered some of those from my first reading of BN, but still, epic issues. As far as a best issue, they were all so good. If I had to pick, probably GL 51.

Surprising was most of the issues, but the Book of the Black at the end of BN 7 got me. Was not expecting the ending there. Black Hand is so chilling throughout the Blackest Night arc.

In terms of favorites, I don’t know, they were all pretty much on the same level, I thought. Like, none of the issues were bad, don’t get it twisted, but they’re all basically big beat-em-ups with a couple of character moments sprinkled in, and there’s really only so much they can do to make that special.

Surprises, nothing big that was a surprise for me. I didn’t remember Parallax ripping Black Lantern Spectre’s face off, that was pretty gnarley.

Y’know, actually I was a little surprised about how they resolved Guy getting rid of the Red Lantern ring, mostly because it made me notice a pattern with this part of of the event – if things are getting too bleak, have Mogo fix it. He already saved the entire Corps once, and now he suddenly can at least mostly purge and heal Lanterns with other dangerous elements? I get that Mogo is mysterious and powerful, but I can already see him potentially becoming a crutch and deus ex machina.

…Wait. Actually. One thing that really surprised me. Reading these issues, I just realized that the Indigo Lantern’s name of “Munk” is a play on the word “Monk.” Like…DUH. How did I NOT notice that before?

But as for the big surprises and revelations that are in these issues:

I remember the thing of Hal repossessing Parallax was hype at the time, but in hindsight, part of me wonders if that should have been a bigger story rather than just a thing the characters decide to throw at the big bad only for it to not work. Like, this is an entity that took over and completely destroyed Hal’s life, so it’s surprising that he’s so gung-ho to jump back into it, even if he is so fearless.

Also, the reveal of life beginning on Earth…I dunno, man. On one hand, it makes some sense – it explains why life is so wild on Earth compared to other planets. It explains why the GLC was initially so adamant not to accept humans into the Corps. But to use a different universe/fandom, it’s sort of like the Cartmel Master Plan for Doctor Who in the 80s – it could work as a story, but does it really help the universe to expand it, or does it actually lessen or contracts it?

I hope I don’t sound too harsh, because there’s definitely some good stuff here. The action from Gleason, Mankhe, and especially Ivan Reis is exceptional, and one thing that I don’t think gets enough credit is the colors. The colors for this and really a lot of the event has been SPECTACULAR, and it really needed to be considering the nature of the event.