Just 24 hours after the vote to decide who the villain of ‘Batman: The Legacy Cowl’ would be we are back with another vote! This time Bat Cowl holders get to vote on what Nightwing, (Batman’s sidekick in this book as voted on by the Bat Faction!) will look like in this book! 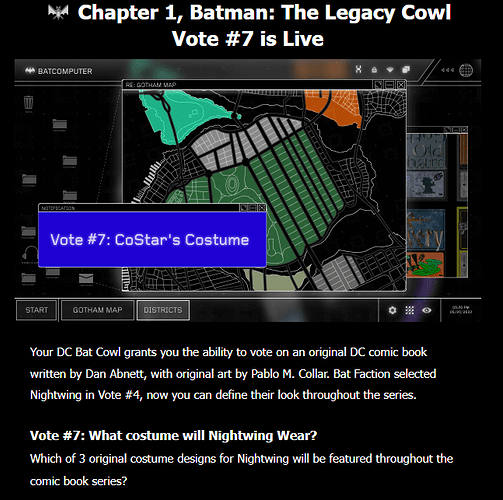 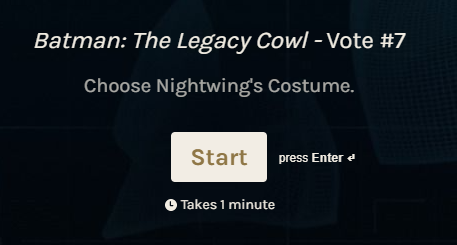 This is very similar to the Nightwing costume that we have seen over the years. The bold Nightwing logo going across the chest and the upper arms, black bodysuit, gloves and boots. Immediately identifiable as Nightwing and iconic.

The difference that I notice are the angled stripes across the upper thighs (usually there are horizontal stripes just below the knees if any at all) and the eye mask which is a thin stripe across the eyes similar to the stripes on his thighs and upper arms. Nightwing’s normal eye mask is a more like a Batman Signal domino as we’ve come to know it, shown here for reference: 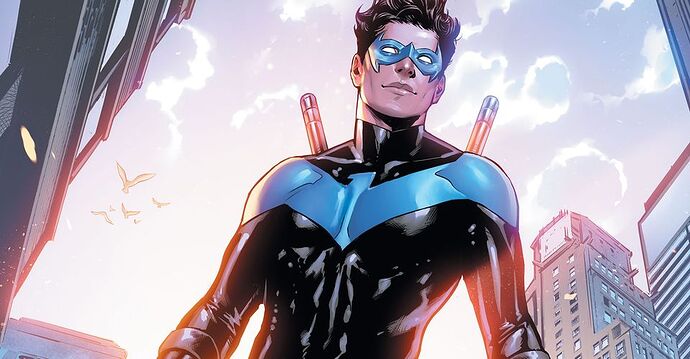 This is both a familiar look but also a different one and I quite like the stripes on the thighs to give the suit a unique look. The uniformity in the look of the eye mask, the Nightwing logo on the chest and the stripes on the upper thighs gives it a nice, balanced look that is aesthetically pleasing.

This is very similar to the first option in that it has the iconic Nightwing logo across the chest and upper arms, the suit is primarily black (including gloves and boots) and the eye mask is once again the thin stripe across the eyes.

There are differences, though. The obvious ones are of course that we now have a turned up collar and a bit of a plunge from the neckline. The stripes across the legs are gone completely as well. In addition there are some subtler changes…

Notice the logo across the upper arms - in Option #1 it dips down a bit towards the elbow whereas this one goes pretty much straight across. Upon further review the gloves in Option #1 have white palms and some tabs/guards on the back of the hands. The gloves in this option appear to have the white palms as well - maybe even a little more exaggerated and extending up the forearm. The boots are also different from Option #1 as they have a lot more white to them, presumably protection/reinforcement. Finally, there appears to be some white on the back of the elbows in this one that was not there in Option #1.

Like the first option this is immediately identifiable but the collar and the neckline really make this one unique from Nightwing looks I’ve seen in the past.

Well now! This is very different. This is a new look for Nightwing, no doubt about it!

Everything from the waist up is new except the eye mask which remained the same in all three options. Let’s start with what’s the same - the boots are the same as Option #2 as are the gloves…kind of. The gloves in Option #2 appear to be part of the suit where in Option #3 they appear to be just a pair of gloves. The forearms are exposed and Nightwing is wearing an all-white jacket with an outline design of his logo that appears to wrap around to the back of the jacket. He once again has a high collar and it flares open in the front to expose the neck.

This feels like what Nightwing would wear if he were going to be in Michael Jackson’s Thriller video. The jacket is very 80s and distinctive. Not sure what the tactical advantages would be but he’s putting a vibe out there with this look. It’s by far the most stylish and unique of the three options.

I don’t have a strong first opinion on this one and will go join the discussion on Discord and cast my vote tomorrow morning. What do you think? Which one would you vote for and why?