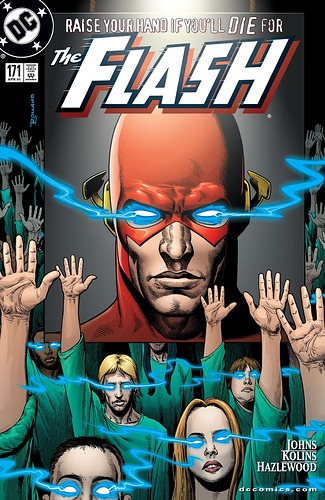 This time, its in the pages of Flashpoint Beyond, which kicks off with issue #0, new to retail this week.

As that Geoff Johns-written series (which you’re welcome to discuss here) carries on, you can get your Fast Flash Fix™ of the Justice League’s Scarlet Speedster from another Geoff Johns-penned tale, Blood Will Run.

Get ready, get set and GO check out this four-part, blood-running adventure in the following issues of The Flash: 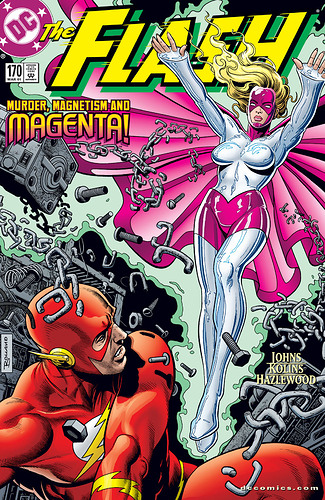 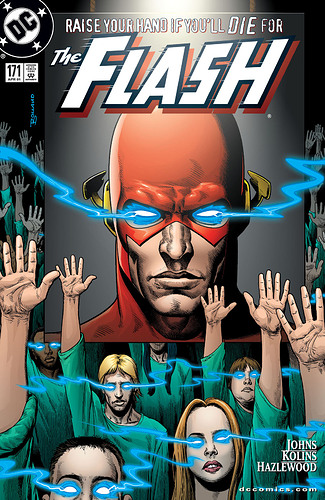 A creepy cult has formed around the Flash, its members vowing to slay anyone the Flash has ever rescued! But before Wally can get a handle on the situation,... 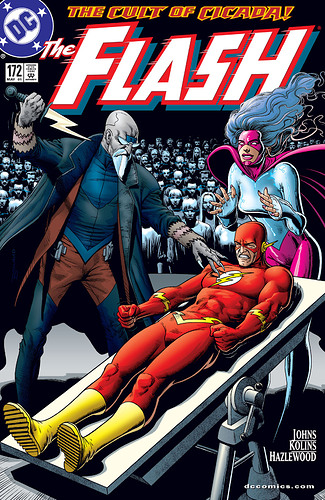 Flash has been captured by the cult that's been murdering all the people of Keystone that the Scarlet Speedster has ever rescued. Now, alone, he faces... 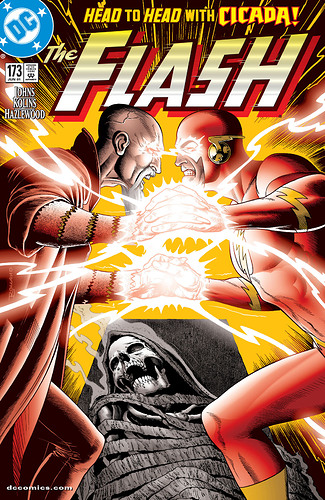 The finale of 'Blood Will Run!' The Flash has found himself an uneasy idol of a murderous cult killing innocent victims in his name. This issue has...

Discuss those points and whatever else you like about this story down below.

As always, have fun League, especially when it comes to The Flash, Flashpoint (which you can chit-chat about here) and Flashpoint Beyond!

Cool. I’m gonna be honest, while I’ve read him from this time period in team-ups or in the JLA, but I haven’t really read a lot of solo Flash stories from this period. The only one I have read was Waid’s retelling of Wally’s time as Kid Flash which I honestly don’t remember caring about too much. So this should be interesting to read – maybe I’ll finally get the fuss for this iteration of Flash.

So ridiculously good and grand in its grand goodness that after reading it, you’ll frame your comic fandom in two portions:

Its like me and movies that had a huge impact on me, both creatively and professionally.

So this should be interesting to read

I hope you enjoy it. Blood Will Run is one of my very favorite arcs from Johns’ Flash (either run). Its compact and to the point, drawn well and it introduced an interesting new villain in Cicada.

So I was only going to read the first issue, but I ended up reading the whole thing. Having only four issues definitely helped.

One of the books I remember reading that had the most of Wally as a developed character was Wolfman/Perez’s New Teen Titans, where one of his biggest issues was his relationship with Frankie Kane, so it’s kind of funny that the first “big” arc of Wally’s I’ve read would include her, and while he was a bit of a crummy boyfriend in that story (among other crummy things), I was also surprised to see that a similar situation with the one cop.

Really, what I thought was most interesting about the arc was that it acknowledged that Wally was kind of an A-hole for a while, and it was something he was trying to fix and grow out of. You don’t really see that in superhero comics, at least not with characters who aren’t traditionally dark and moody and the like. It’s especially surprising given just how fans have sanctified Wally in recent years. There wasn’t a lot of growth within these four issues, but I do think it shows promise.

The actual villain Cicada? Eh, he was kind of bland to me. I don’t even remember him in the TV show, though honestly I haven’t watched since Crisis. I would have much rather seen more of Magenta.

Let’s see, what else…the combo of the old-as-dirt beat cop and LA detective was kind of fun. I could see an issue of them Lethal Weaponing it up being fun.

That’s about it. Overall, a lot of the story fells kind of cliched and is just functional, but there are some interesting nuggets there that could have been expanded.

So I was only going to read the first issue, but I ended up reading the whole thing.

Having only four issues definitely helped.

This is why I adopted the Micro-Read™ “feature”, as I feel it gives folks a tasty little morsel they can easily and quickly read, without having to carve out time for a more traditionally-sized read.

Really, what I thought was most interesting about the arc was that it acknowledged that Wally was kind of an A-hole for a while, and it was something he was trying to fix and grow out of.

Agreed. That’s one of the nice non-super things about this story. We certainly have action, but seeing Wally’s development is one of the better “quieter” elements of this story.

I would have much rather seen more of Magenta.

You and me both, and that’s coming from someone who thinks Cicada is among the more underrated of Flash’s modern rogues.

Did you binge read it while watching The Flash on TV? Specifically the episodes of the CW Flash with Cicada?

I have to confess: I vastly preferred the comic take on Cicada to his CW iteration. IDK why, but I kind of found the TV take to be…annoying, for lack of a better word, at times. He was pretty neat all-around, but at other times, this was me when he was on-screen:

The comic version of him, to me at least, didn’t mess around and was a true threat to Flash.

Depending on how next year’s Flash movie plays out (and I hope it does very well), it would be neat to see sequels pull from Johns’ Flash runs. An emphasis on Blood Will Run would be especially cool, as it could work pretty well for a sequel.

Did you binge read it while watching The Flash

I did not. I did take a short break between the 2nd & 3rd installments. This version was more straight forward. I liked the cult aspect.

The TV version was more about going the long way around creating (and then erasing) Nora’s timeline.

I liked the cult aspect.

Likewise, as it added a nice element of sinister villainy to the story.