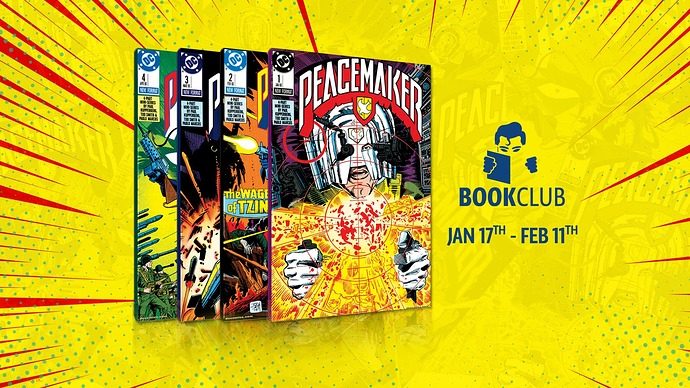 That’s right: this month is all about Peacemaker! From January 17th to February 11th, we’ll be diving into the 4-issue Peacemaker '87 Series! The series is FREE to read for all registered DCUI members, so give them a read and join the discussions in this thread!

Read as Peacemaker takes on hordes of baddies across Europe, and confront some of his deepest demons. Will our peace-loving vigilante hero come out on top? Only one way to find out…

For this Book Club, we’ll be going through each book week by week:

Here are some thought starter/discussion questions to kick things off!

As always, what would a DC Book Club be without some awesome digital perks? Check out these awesome Peacemaker wallpapers and bookmarks! 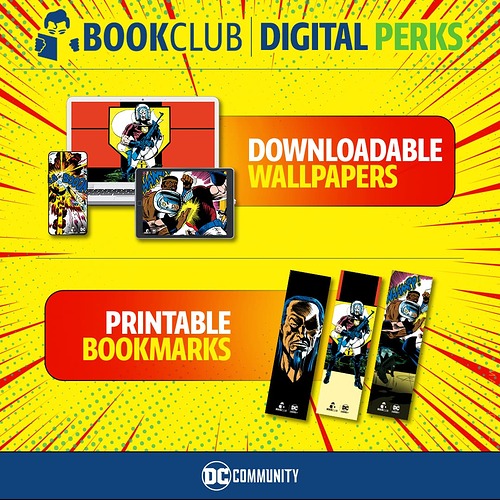 Can’t get enough Peacemaker? Show off your peace-loving style with EXCLUSIVE Peacemaker merch and apparel! Head over to the DC Shop, and upgrade your wardrobe!

Wonder if John Cena ever heard of Peacemaker before he ever got the part. I sure didn’t!

Same here - and I hope he gets asked that on Podly: The Official Peacemaker Podcast if he is a guest later this season.

Since the only knowledge of the character I have is from The Suicide Squad, Peacemaker and the recent Suicide Squad run that has him involved this will be a fun trip back to the 80s to read some of the classic Peacemaker tales with all y’all. Inspired by the soundtrack of Peacemaker I might have to put on some hair metal/sleaze metal while I read these. I think The Quireboys sounds about right!

Looking forward to this and forgive me if I can’t wait until January 17th to start. I’m off to read Peacemaker 1 now!

I’m so elated to hear that it’s called “Podly”.

I’m also on board with you and @Reaganfan78 – I only know him from the movie, so I’m excited to dive into this too!

I am sorry, and no offense… but I don’t think I can read this garbage again.

This is on my to-read list! I’ll try to read along with everyone, but I’m in like 3 different comics right now lol

Nay. Find the 5 or so Charlton issues from the 60’s. Those are weird, but cool in their way.

I had heard of and sort of read him before The Suicide Squad, but more by what he influenced than anything.

For those that don’t know, when Alan Moore was first thinking up Watchmen, it was originally going to use the characters from Charlton Comics. But DC asked him not to use the characters, because they had just acquired the rights to the characters and wanted to introduce them into the main DC Universe and felt that would be harder to do with Moore deconstructing them. So Moore opted to make original characters that were heavily influenced by these Charleton characters, and the character that was going to be Peacemaker became The Comedian.

We would later get a version of that story in Multiversity. One of the stories in that series, Pax Americana, was Grant Morrison doing a Watchmen style story with the original Charleton characters, including Peacemaker. 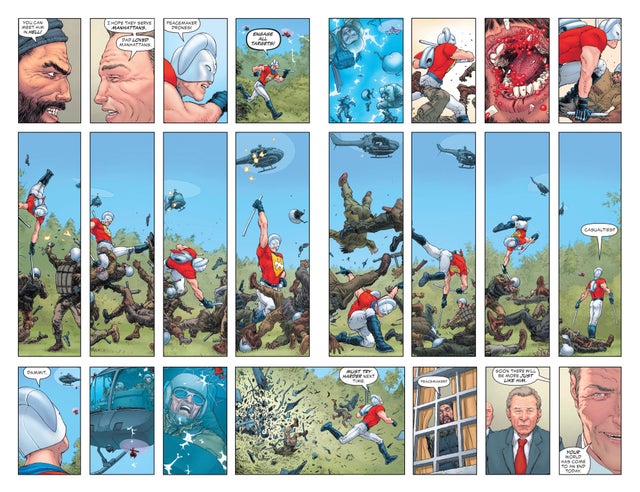 Oh, and looking forward to reading this mini – I’ve been wanting to since the release of TSS, but it’ll help to talk about it with everyone.

Just got done reading issue #1 and…that was something! Quite the departure from the goofy, violent oaf we’ve come to know and love in recent months. So much to digest and discuss - looking forward to this starting on Monday.

So much to digest and discuss - looking forward to this starting on Monday.

Glad you enjoyed the first read–definitely looking forward to discussing this one as well!