So… Tell me if I’m crazy, but in the preview for this year’s Pride Month special… Who could this: 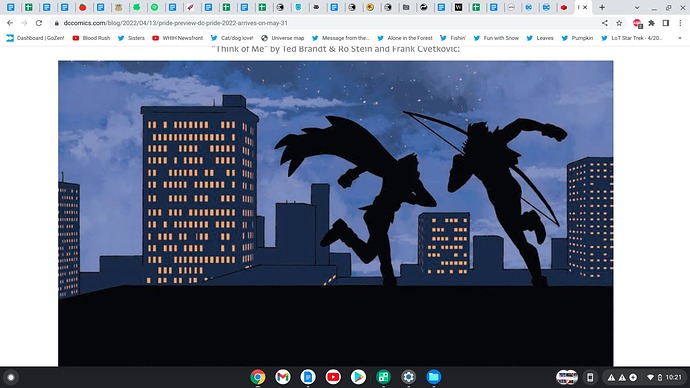 be… Other than maybe Jason Todd and Roy Harper? Obviously, the cape is weird, but it’s not like there’s anyone else it could be with the arrow, I mean, Team Arrow are more or less all canonically straight, but… I mean, that’s an archer, and a vigilante with spiky hair and a cape… Who else could it be? I mean, maybe William being gay in Arrow is being carried over to Conner Hawke? But if that’s true, who’s the Robin-esque person? I mean, those are definitely Roy’s early post-crisis gloves… Is Robin coming out going to be an annual thing now? And the experiences Roy’s gone through in the past eighteen months could certainly strengthen the two of their bond… I’m clearly grasping at straws here, but when you’ve eliminated the impossible, whatever remains, however improbable, must be the truth. Am I missing some other improbables here?

Its Connor and Damian. Connor has been queer coded since forever, like, he’s been portrayed as having no interest in women and kinda maybe in men since his debut. The writing team is almost exclusively ace so it seems very likely they’re going to be confirming that Connor is ace, which is an incredibly popular head canon.

I’m not really familiar with Conner at all, I mostly know Team Arrow from the TV show and their crossovers with the rest of DC. But that’s cool that they’re doing that.

The writing team is almost exclusively ace so it seems very likely they’re going to be confirming that Connor is ace, which is an incredibly popular head canon.

I didn’t know any of this and I am now incredibly excited about this story.

I was already excited about everything in this Pride Anthology but if that is true, I am so so excited for this.

Hopefully that is true, otherwise the writers aren’t as creative and smart as they think they are.

Well, they officially announced it today: 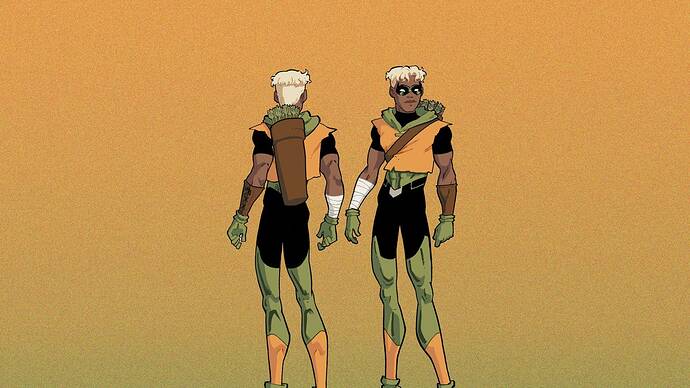 An all-ace creative team is finally making some obvious subtext into canon.

And he officially became my favorite now.

Its damian wayne and conner hawk.

Oh, sweet! This is fantastic!

Soo… uhh… anyone know any good Connor Hawke comics to read? It seems I have a new favorite character to catch up on.

One thing I’ll say is, I don’t get why they are sharing everything before the issue releases… but in this case I’m okay with it because this really is awesome news.

Honestly, the book I’ve read him in that had the most impact to me was Josh Williamson’s Robin series which features the return of Conner Hawke to the DCU.

I’m reading that now! And I’m loving it!

Connor also starred in the 1988 Green Arrow series from issues 102-137 which is where he was most popular I believe.

I’m excited that there will be an Ace character in canon.

, he’s been portrayed as having no interest in women and kinda maybe in men since his debut.

Probally because he grow up in a Buddist monistery

Yeah, but more people will be familiar with Connor than some rando from the Secret Six. I did see on DC Database that Walter Kovacs/Rorschach is asexual, which if true is a harmful stereotype (not the only one in the series, obviously), although more likely whoever added that is just confusing asexuality and celibacy. But Connor is the first to both not be a harmful stereotype and connect to a big-name superhero.

I love how this thread started with me being totally wrong, and now it’s just a discussion about Connor coming out.

True, as great as it was having Tremor be the 1st, Connor’s definitely gonna get a lot more attention, and it’s important to have representation like this not be relegated to little-known characters

Also, I’m pretty sure Rorschach has never actually been confirmed as ace. There’s been plenty of discussion as to whether he is or not, but nothing actually concrete

Also, I’m pretty sure Rorschach has never actually been confirmed as ace. There’s been plenty of discussion as to whether he is or not, but nothing actually concrete

Yeah, I don’t think he is, it’s really just saying that he must be because he fits a harmful stereotype.