Is Dick Grayson Being Introduced in the Season Finale of Batwoman?

They just released the synopsis of the series finale of Batwoman “O, Mouse.” 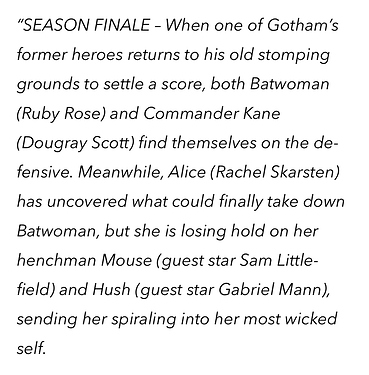 Who is this “Former Hero of Gotham”? Surely, it has to be someone in the bat family and they’re definitely trying to elude to the Big Bat(man) himself - but we know that’s just a tease. I’m routing for Dick Grayson. I know it’s a long shot with Titans in production, but this is the season one finale and sets up excitement for season 2. What better way than bring Nightwing to help rile up the status quo.

Which Gotham hero do u think will be making their CW debut on Episode 20 of Batwoman?

Nightwing seems like the most logical choice based on that description, but I agree it’s unlikely with Titans on DC Universe and a Nightwing film in development. Jason Todd/Red Hood would fit the bill as well – plus he’s much more of a “settle a score” type guy – but I’m not sure the writers want to open that can of worms re: his death & resurrection.

Jason Todd/Red Hood would fit the bill as well – plus he’s much more of a “settle a score” type guy – but I’m not sure the writers want to open that can of worms re: his death & resurrection.

They already eluded to his death with Batman killing the joker, so it’s a definite possibility.

I just have a hard time seeing the history of Kate and Jason - Dick was at least shown together with Kate in the comics, running in the same affluent circles growing up. It’s make sense she knows Dick, knew of him as Bruce’s ward and treated like family.

I guess it depends on where Jason fits into the timeline. Assuming he was Bruce Wayne’s ward before Kate left Gotham to train, it’s reasonable they would have at least met a couple of times. But the hero doesn’t need to have a connection to Kate for it to be interesting – if it’s a Red Hood or Azrael type vigilante, it could put Kate’s recent actions in a different light when she sees where that path takes a crime fighter.

Azrael could be good, and there’s lots of comics of Azreal and Luke working together to work into the future when Batwing comes on the scene.

I think its going to be Tim Drake. Simply because he’s one of the only Robins not being planed for a movie and not in another tv show at the moment.

This I could really get behind. Bringing him into this world could give Luke a run in the smarts/tech department should he become a fixture in future seasons. And I’d love if we get Tim Drake, that means Spoiler isn’t too far off in the horizon.

Plus Tim Drake hasn’t been in a Live Action adaptation yet so that could be interesting to.

I don’t think t would be anyone who is associated with Titans. Azrael is a safe bet, he could even be refer to being Batman once. Tim Drake would be the best bet out of main Bat Family members, mainly because he’s the only who isn’t being used, or has anything else in development anywhere else. It would probably be someone obscure tho that nobody has any interest anywhere else.

My money is on Tim Drake, probably as Red Robin.

One of the Robins definitely makes the most sense to me. I was just thinking though, if they wanted to go with someone people might not expect what about Alan Scott? A Green Lantern probably doesn’t fit their effects budget and, in my opinion, doesn’t fit the aesthetic of the show.

Nightwing seems like the most logical choice based on that description, but I agree it’s unlikely with Titans on DC Universe and a Nightwing film in development.

Neither of those things would have any effect on Batwoman using the character of Dick Grayson.

The more I think about it, the more I think it could be Secret Agent (Ric) Grayson - double agent to the owls. No robin, no nightwing, just his altered persona from the new 52 and rebirth melded together. Could be a nice setup into season two’s big bad and secret affiliation revelation of Tuxedo One.

secret affiliation revelation of Tuxedo One.

It’s practically official. It’s Azreal based on the writings of Lucius Fox’s journal.

In this article (which contains spoilers for last night’s episode), the showrunner says “The hero is somebody we, the writers, have created” so it’s probably not an existing character. But it could be a new version of a hero we’ve seen before, so maybe an Azrael who isn’t Jean-Paul or a new take on Batwing (who could be there to inspire Luke).

“The hero is somebody we, the writers, have created”

This would be amazing, but I’m not sure