Is straightness so essential to seeing yourself in a character?

Nope, but it’s real for some people is all I’m saying. If you think I was saying there are already enough then all I will say is also nope. Not what I said not what I meant.

Let me rephrase me question - is Straightness an element people need to see in a character to relate to them or is it anti-queerness.

Many characters people relate to never have romantic plots. Does that mean people can’t find themselves in a character?

Someone who’s loved Tim Drake their entire life isn’t suddenly going to dislike him. He’s still Tim Drake first and foremost, and if being Bisexual, is a deal-breaker for your like of the charatcer, maybe the problem is you.

I think you’re taking my comment above and beyond what I said and meant.

I’m just trying to say that we shouldn’t think/worry about those people when trying to expand diversity.

There are definitely people like that and correct the world should not cater to them. my point is that someone can have a feeling about it without being “those people”.

Someone who’s loved Tim Drake their entire life isn’t suddenly going to dislike him. He’s still Tim Drake first and foremost, and if being Bisexual, is a deal-breaker for your like of the charatcer, maybe the problem is you.

To the same esteem, if someone only finds Tim readable because of this retcon–?

my point is that someone can have a feeling about it without being “those people”.

Very true. In fact, they may even be part of the very group DC is trying to attract with such a move as making a straight character, not-straight. Case in point, I have a friend that’s LGBTQ, who doesn’t much like the idea of changing established characters in such a way.

People “ship” characters and declare them this or that based on little to no actual foundation beyond some personal observation or feeling. It’s a quirk in the fandom, a personal affectation not unlike fan-fiction. Innocuous incidents or elements are propped up as concrete evidence. It could be that they had a fun time at a party, because they have dissimilar superpowers, similar costumes/colors, they’re on the same team, on opposite sides, or the main character bumped into a complete stranger at a Denny’s, which is somehow “destined true love” or whatever. So let’s just say I’m skeptical.
It’s also not something I’ve really indulged in, myself.

There’s a way to make it stick, there’s a slapdash method, and it’s entirely possible it’s just not a good idea for this character. Heck, I question the whole “still Tim Drake” statement, because the most recent I read of him was the butchery that was 48 issues of 'Tec starting at Rebirth (which despite the renewed original origin, seemed to keep some of New52 in play), where everyone and their legally blind Aunt Gertrude was, allegedly an expert super genius/hacker, but kept being stupid over and over and over and over and over and needless to say, I’ve found DC’s track record for “change” and/or good ideas to have been abysmal for some time.

on little to no actual foundation beyond some personal observation or feeling.

But there is a history of Queer-coding with the character. This isn’t a random decision. Queer coding - When characters do queer tropes, or do things designed to imply a queer relationship without explicitly saying it.

For Tim Drake, in 2006, he was doing something in a closet with Connor designed to imply/suggest they made out. 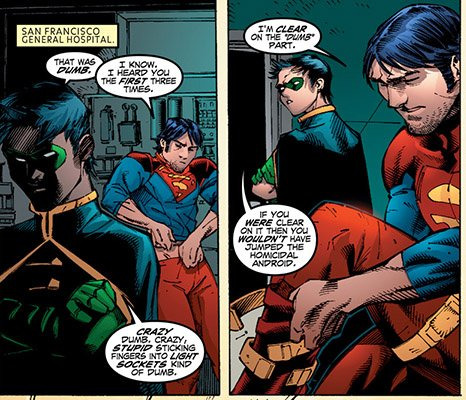 The two have a much deeper connection than just friendship.

In New 52, Tim Drake got stuck in a pride parade and became friends with all of them.

There’s plenty of other instances. It’s not a ship that comes out of nowhere, but rather a history of suggestions by creators.

In New 52, Tim Drake got stuck in a pride parade and became friends with all of them.

It’s not a ship that comes out of nowhere, but rather a history of suggestions by creators.

Provided the creators actually confirmed that was their goal, as Paul Dini did with Harley and Ivy, and the instances of which you speak aren’t simply being taken out of context for some readers to validate their ship.

why??? just because now is DC making everyone black or oriental or homosexal?
And that’s is the reason I’ve stopped buying a lot of DC comics. To change an ethnicity, sexual preference, sex only for a fashion

I put aside the consumption of a comic when the editorial make a nonsensical change.
DC is not respecting the character in its essence. And even worse when it is your favorite character.
Harley and Ivy made a good conversion bi it was slow.
It’s better generate a well-constructed characters of the ethnicity, gender, and sexual preference you want. But altering an established character is a very mediocre writing.

On the other hand…of all the Robins, why did they have to choose the boring one?

tks for said it

Actually you know what I change my mind. I think every single character is bi until the writers personally tell me that I’m wrong. A lot more real people are queer than almost everyone realizes. For every straight character there are 10 queer ones to balance out all the years of not having any. Superman is bi, Batman is pan, at least 1 teen titan is trans. It’s just fair

Someone somewhere posted a snapshot from the Pride issue that I will butcher in paraphrase. Basically, it’s important to have diversity because it means that someone out there can now see themselves in a character. I think that is an absolutely valid point but I do think it’s important to note that some people saw themselves in Tim (or Iceman, etc) already and now they don’t. A lot of the anger over these changes can be toxic internet “fanboy” (unfair use of fandom) so any time a person might resist the change they are labeled a bigot or hater but for readers that gain Tim there are others who lose Tim. There are still many many many more characters left so that’s absolutely not a plea to feel sorry for anyone, not a “won’t someone think of the straight white male fans?” rant but it would be true for some fans.

I just find it lazy of them to keep doing this with established characters.

I never quite understood this argument, because wouldn’t it be lazier to keep characters exactly the same and to never do anything new with them?

I do think of it as a personality shift but not as a negative. I think of personality as the embodiment and representation of our thoughts and emotions and how that impacts our behavior.
For the record, I didn’t write what I wrote as some kind of code that I personally have a problem with it. I just think that it’s kind of this view that the queer community should have queer role models and representation (they should) but if a straight person identifies with a straight character then that connection is discounted as “why does his sexuality matter?” It’s not the ONLY thing that matters, I’m not saying that. I’m not saying that people can only relate to a character if every aspect of their lives matches. But. If it matters for the queer community to see queer representation I think it’s equally valid that it can matter for the straight or cisgender community.
Again, this is so hard on the internet because we all bring our own experiences and thoughts and assumptions to conversations without facial expression and tone. I am in no way saying it’s wrong or bad or unfair or an agenda.

I agree completely, its like if instead of making Tim Bi, they where like “he has been a vampire this whole time!!!” .
It doesn’t make any sense to do it. I will make a reference to Shameless because I think its a good example, Ian was gay for the entirety of the show, he was always gay. But soon they make Debbie like girls out of the blue after being straight for the whole series. When there is 1 gay sibling it is a perfect balance, but when it becomes multiple characters it is just a bit much. I feel like its the same with the batfamily and the Batman franchise. I genuinely believe it is about the whole “political correctness” thing these days, like with them wanting to make a black superman. Thats fine but why not let Henry Cavill keep the role that he plays better than anyone in my opinion, sense he literally has the perfect body, acting skill and looks for superman and give black lightning or cyborg or even batwing their own movie! I just hate to see people changing everything about a character to be inclusive when they can literally just make more to be inclusive. (within reason.)

This makes no sense at all…

Actually you know what I change my mind. I think every single character is bi until the writers personally tell me that I’m wrong. A lot more real people are queer than almost everyone realizes. For every straight character there are 10 queer ones to balance out all the years of not having any. Superman is bi, Batman is pan, at least 1 teen titan is trans. It’s just fair