When Oracle asks Tim he wants Spoiler to come help him as back up. He tells her to “Drop it, Barbara, and stop talking to my ex about me.”

Batman Urban Legends reveals that the on and off again couple in off, as Stephanie and Tim have broken up. If DC wants to explore Tim’s sexuality, it’s easier to tell that story with a single Tim Drake.

Tim Responds in his head
“Is Oracle right, am I too scared to–” before his thought is interupted.

This is very similar to conversations that tend to go with “You are missing something about yourself. We’ve been reading the signs and thing you need to figure out who you are.” This line comes a couple exchanges after the line from part 1.

Maybe this isn’t a date, but it has a lot of similarities.

So while it’s not official, by all accounts, it looks like Tim Drake is beginning a coming out story, and I CAN’T WAIT!!!

If you are thinking “Oh Tim Drake can’t be bisexual!!” read the following article about Tim Drake and Kon-el’s relationship by @HubCityQuestion
https://www.dcuniverseinfinite.com/news/robin-superboy-greatest-teen-romance-never-was/

Honestly after reading this issue, it’s hard to imagine DC isn’t testing the waters to see how receptive their readers might be to canonizing Tim Drake’s bisexuality, something which both fans and creators have speculated upon for a long time. (To wit: see James Tynion’s “TimKon4Life” easter egg in The Nice House on the Lake #1.)

Tynion himself has made comments about this Tim Drake story, saying it’s been something he’s wanted to see for the character for a long time. I’d say that this is almost certainly the direction intended for Tim Drake in this story (he borrows Dick’s suit! Bernard covers the check!), but just how explicit DC is willing to make it- whether Tim talks about his sexuality, or even gets explicitly romantic with Bernard by the end of this story- remains to be seen.

And, for the record, I am 100% in support of this, and hope to see a commitment to this character development going forward.

From how I read it, it definitely seems like they were on a date. And mentioning steph as his ex has to be a deliberate choice in this situation

I see a lot of myself in Tim in general (probably the character i relate to the most in dc) and i can definitely see teenage me figuring out my identity at that age in this comic. Do I hope Tim comes out? I really do, but i wouldn’t be too surprised if he doesn’t (trying not to get my hopes up)

I’d absolutely be on board w/ this as well. While it’s kind of a bummer to see that Tim and Steph broke up (assuming all of these stories are in the main continuity), this would be a pretty big move that’d validate a lot of fan interpretations from over the years. And hopefully we find out definitively 1 way or another relatively soon. Tim ultimately not being bi would suck, but finding that out quickly would still be better than an extended period of teasing and baiting w/out actually committing to it

Sorry, not really on board with this. Breaking up Tim and Steph off-panel just to validate niche fanfics and add drama to a book doesn’t seem like a fair trade to me. But hey, I can’t fault DC for playing to their audience.

I wanna start out by saying im not homophobic. There are plenty of characters in comics, movies and other things I like to see as LGBT.
But I genuinely believe there are enough batman characters that are of that nature though. It is good and cool and inclusive when it is 1 or 2 of them but look at the amount of gay characters in batman there are already: Batwoman, Renee Montoya, Selina Kyle (in some comics), Harley Quinn, poison ivy (sometimes), Harper rows brother, and according to Wikipedia, Dick Grayson. (which I can totally see even though it isn’t blatantly shown).
Look, I have no problem with characters being gat because sometimes it is great for a story! But in this case it just sounds like an attention grab because it is pride month. That being said, I still think either way Tim Drake should just stay the way he is currently is. I believe DC is very inclusive already and if they want to make new characters to be LGBT that’s great! But Tim is a precious character. So I believe he should stay the same.

according to Wikipedia, Dick Grayson

The only thing there I can see regarding Dick in this context is how many people have pointed out gay subtext between him and Batman over the years, but nothing about him ever being confirmed to be gay or bi in the comics or any other official version 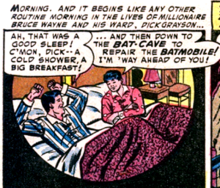 Homosexuality in the Batman franchise

Gay interpretations have been part of the academic study of the Batman franchise at least since psychiatrist Fredric Wertham asserted in his 1954 book Seduction of the Innocent that "Batman stories are psychologically homosexual". Wertham, as well as parodies, fans, and other independent parties, have interpreted Batman and his sidekick Robin (Dick Grayson) as gay or in a relationship with each other. DC Comics has never indicated Batman or any of his male allies to be gay. Several characters in ...

Tim Drake has only dated women in the past*, but his sexuality is never explicitly stated so it’s not even like it’s a retcon or changing the character! He never said “i am explicitly attracted to women” so there’s nothing preventing him from being bi or pan

Regardless of where they go with him, i’m always happy for more tim drake content <3

*not counting whatever he and conner have going on

very happy about this, side question am I the only Stephanie brown fan who prefers her single than to being with tim? its just my favorite Steph stuff (her batgirl comic) she is single and I prefer her dynamic with other members of the batfam to tim

Tim Drake has only dated women in the past*, but his sexuality is never explicitly stated so it’s not even like it’s a retcon or changing the character! He never said “i am explicitly attracted to women” so there’s nothing preventing him from being bi or pan

By that logic, 99% of the DC Universe is a hop, skip, and a jump away from coming out as bisexual

Not to say that being bi or pan is a bad thing, but the argument just doesn’t hold up. It hasn’t been necessary for Tim to explicitly state that he is only attracted to women (until now, I guess). His years of dating Ariana, Steph, Lynx, Tam Fox, and even Jubilee seemed to make it pretty clear that he was straight.

Personally, the stuff with Conner always seemed like more of a weird conspiracy theory to me than the concrete evidence people make it out to be. I remember reading an article on here that pulled together every piece of “proof” for this ship, and it still didn’t seem all that convincing to me.

Can’t say I’m excited about it. Breaking up Steph and Tim really sucks when they seemed to be firing on all cylinders in Young Justice. I know a number of people have rooted for this over the years, but I’d prefer he stay with Steph as that’s a relationship I’ve been invested in for years. If you’re breaking them up to explore this, then at least show that. This all seemed completely out of nowhere, and honestly, if they’re intent on doing this, then Tim deserves better than for it to happen in a backup story. I also think there are a number of other existing Bat characters where you can explore this territory instead of using Tim, including Kate Kane, Cullen Row, Montoya…

Exactly. Sorry, but this just seemed completely out of nowhere. Not a development I’m a fan of.

I’m torn on this.

On one hand, always awesome to see some more representation in the DCU – especially for bi males, because it seems like the few we do get tend to be more the chaotic disaster types, so having one as a full-on hero is a nice step.

On the other hand…of all the Robins, why did they have to choose the boring one?

His years of dating Ariana, Steph, Lynx, Tam Fox, and even Jubilee seemed to make it pretty clear that he was straight.

I don’t doubt that he’s likely been straight this whole time, but sexuality isn’t something that’s set in stone for your entire life. People can take years to figure that out for themselves and/or come out – just look at Alan Scott. If they do go this route w/ Tim, it doesn’t have to be a reveal that he’s been bi the whole time, but could instead be him coming to the realization himself that he also likes men

I guess I’m not that broken up about the Tim/Steph split because, as long as they’ve been together, Steph has had little characterization other than being “Tim’s girlfriend.” Splitting them apart gives Stephanie space to build her own character.

I’m kind of excited about this because just because hes been giving me those vibes lol. I also think this is a good thing for Steph because shes been known as Tim’s girlfriend for a long time (before I got into comics I only knew her as Tims gf and not spoiler/batgirl). That being said I hope they don’t do that stereotype. where Tim says “our relationship didn’t mean anything because I’m secretly gay” because their relationship has been pretty meaningful. I hope they can stay friends bc I love their dynamic. Truth be told I was never a huge fan of Tim/Steph but I hope they do stay friends and writers don’t write them as mad exes. 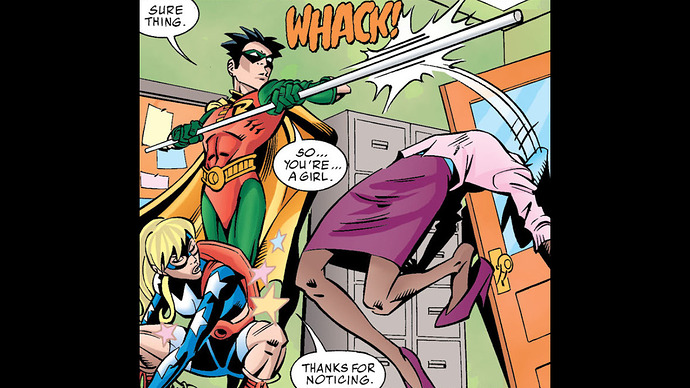