I AM BATMAN Series

One review made me smile a little… 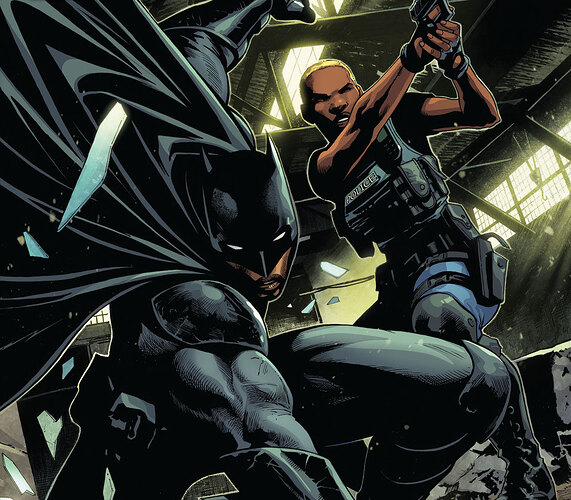 ‘I Am Batman’ #11 lacks Batman, but has plenty of melodrama

'I Am Batman' #11 continues to focus on its large supporting cast.

Character work is the name of the game with this issue, with key characters meeting and talking throughout. Ridley progresses relationships and the information the reader needs to understand the drama between them well. Characters can get to talking a lot, to the point where it feels like Ridley spends too much time focusing on dialogue and not enough time on action or advancing the plot visually.

A two-page scene between Jace and Vol is a good example of how this series is more of a procedural with lots of dialogue than action. It’s neat to see them discuss where the headquarters for Batman could be in New York, but it also reads like the scene could have taken place over two panels rather than two pages, or at least had them doing something in the scene beyond standing around.

I felt they could have done two more pages of Jace and Vol just standing around and talking.

That was one of the best parts of the issue to me.

Speaking of, much of this issue focuses so heavily on character drama that it seems to have lost sight of Batman patrolling the streets, fighting crime, and villains needing vanquishing. It’s becoming much more clear that this isn’t a Batman comic or about Jace anymore, but more about the supporting cast. That’s a bit of a bummer, as seeing Jace take on the mantle of Batman in a new city was the main selling point of the series.

I Am Batman #11 is a good character drama, but lacks Batman fighting villains and criminals in general. There’s a promise of more superhero stuff, but expect to dig into character relationships more than anything else.

Yeah, that’s pretty much how he’s written all of this.

The first issue of THE NEXT BATMAN: SECOND SON going forward has been this way – plenty of drama and not much of any super-hero stuff.

This is a slow burn, almost slice-of-life series.

That’s like perfect, isn’t it… I think it is…

And I guess I’m projecting my own lack of interest in seeing Jace dressed as Batman, but it seems like John Ridley kind of rushes through it too, in order to get back to the drama.

It’s like, “Yeah, he’s Batman, but I’d much rather write about this other stuff.”

Normally I am not a big fan of Derenick’s art. I will say, though, that he has an interesting Jim Aparo vibe going on with his pages in this issue. Not sure if it’s intentional but his action scenes in particular really felt like Aparo.

Yeah, it was a really odd choice to me.

But I guess it’s because he was available and is fast… ? And instead of delaying the issue for a week or two in order to let Christian Duce finish up those pages, let’s just throw in an artist whose style is nothing like the regular artist’s style.

Anyway, a random thought on I AM BATMAN #15:

Since it’s a late addition… 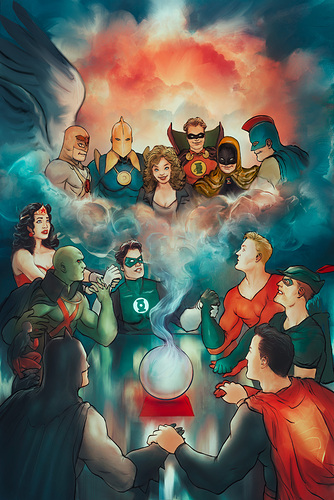 The Threat of the Great Darkness is Growing

DCComics.com: Welcome to the Official Site for DC. DC is home to the "World's Greatest Super Heroes,” including SUPERMAN, BATMAN, WONDER WOMAN, GREEN LANTERN, THE FLASH, AQUAMAN and more.

Also revealed for the first time is that I Am Batman #15 from writer John Ridley, releasing in November, will connect to Dark Crisis. Story details and full creative team will be announced at a later date.

I’m a little worried about this, because this take on Batman doesn’t really fit in at all with any of that DARK CRISIS stuff.

Then again, I have no real idea what’s going on with DARK CRISIS because I’m not reading it, but I just suspect that what John Ridley is doing with Jace doesn’t really fit in with whatever they’re doing.

And that’s what’s a bit worrying to me, that they’re going to change I AM BATMAN and turn it into more of a regular super-hero comic.

A silver lining though is maybe they’ll just relaunch it and have Jace be in his own separate timeline or Earth or whatever. Jace doesn’t interact with any of the other Bat-people anyway, so it’s not like he’d be missed.

Just do a reverse of what 5G was going to be: instead of Bruce Wayne going off into his own little world with Superman and Wonder Woman, just send Jace off into his.

It’s not like it would sell worse – I think it’s already the lowest selling Bat-book.

No, who knows what’s going to happen post-DARK CRISIS.

Whatever it is, just get to end of it. Let me see what happens afterwards, that’s what I’m interested in…

An article on the “Bat-Helix”… 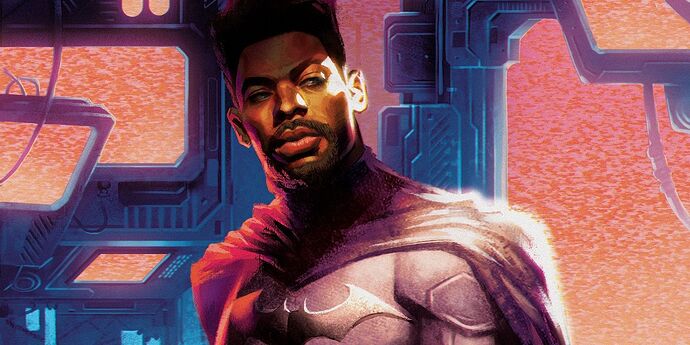 Jace Fox has reached another milestone as New York's Batman with the introduction of his own Batcave that's perfectly tailored to his needs.

It is not technically a cave, more like a transportation hub. Still, its design is unique, allowing Jace the secrecy he needs to operate as Batman while providing ample room for his base of operations. More importantly, the hideout, coined “the Bat-Helix” by Jace, suits his style of vigilantism by keeping him close to the people he’s trying to stand up for.

The Helix also has a unique structure. It’s built on rotating platforms to separate its three levels, two of which are underground. This gives Jace the ability to operate in total secrecy. Additionally, it puts him in a position to easily defend himself in the unlikely event someone tries to attack his base. The two underground levels would act as a staging ground to work on cases and develop tech. Most importantly, it gives him access to New York’s subway tunnels, so he can travel around the city quickly.

What makes this place perfect for Jace’s Batman, however, is the intent to use it as a satellite office for his mother’s impact fund. It would allow Jace not only to help his family do good work but also put him front and center to hear the problems that the people of New York have. Jace’s Batman isn’t limited to battling super criminals. He remains dedicated to standing up to the elites of the world.

Hopefully they just call it the Helix, but “Bat-Helix” is fine too, I guess.

I was wondering if they were just going to have Jace use his father’s money and buy an anonymous building or something and turn that into some type of base of operation.

This solution works better though, I imagine – although it is kind of a similar thing…

The Helix was built in the seventies and designed to be a transportation hub connecting Harlem to subways and airports. However, New York’s bankruptcy period forced its backers to abandon the project. Almost half a century later, the building has been forgotten even by the few people working on it. So, right off the bat (pun not intended), the building is perfect for a secrecy-minded vigilante like Jace. It has anonymity, having fallen through the cracks of New York’s records, and there is little reason for any city official to suspect that Batman is using one of New York’s abandoned projects as a base.

Either way, I like what John Ridley came up with.

And this kind of gives me a little of the “Applied Science Division” idea or vibe that Christopher Nolan used in his movies. I’m guessing this might (or I’m hoping it will, at least) have a minimalist or Brutalist architectural style; just clean and simple.

It would be fun if they went old 70s DC Comics and gave like a layout or something in the back of the issue once it debuts. 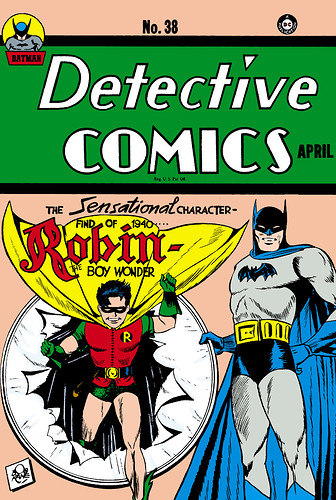 Featuring the first appearance of Dick Grayson! As Batman's sidekick Robin debuts, learn how Dick Grayson went from circus performer to the Boy Wonder to... 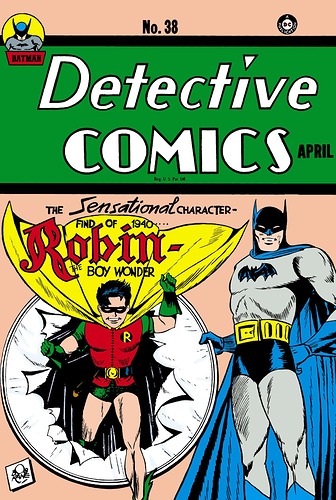 That was the sensational character find of 1940.

From the October solicits…

I AM BATMAN #14
Written by JOHN RIDLEY
Art and cover by CHRISTIAN DUCE
Variant cover by HOWARD PORTER
1:25 variant cover by CAANAN WHITE
$3.99 US | 32 pages | Variant $4.99 US (card stock)
ON SALE 10/11/22
The mystery of a pair of brutal murders is solved, a hero is born, and a mantle is passed. The conclusion of the intense “She Got Next” saga will reverberate from New York all the way back to Gotham City as it sets up the next chapters for both Jace Fox and Renee Montoya. 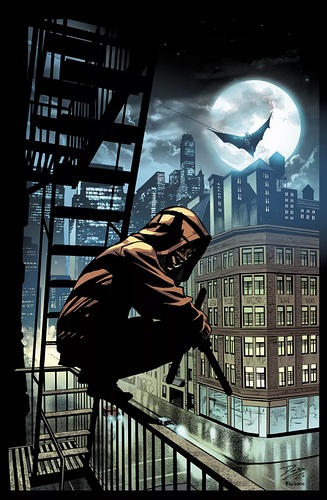 The sensational character find of 2022! 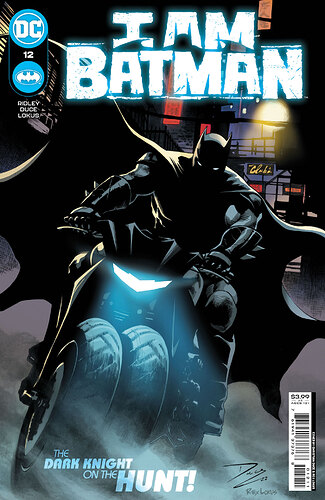 DC’s most inscrutable hero arrives in New York City to task Jace Fox’s Batman with helping them solve a mystery of the past. 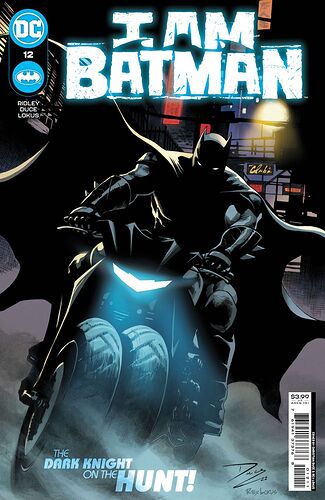 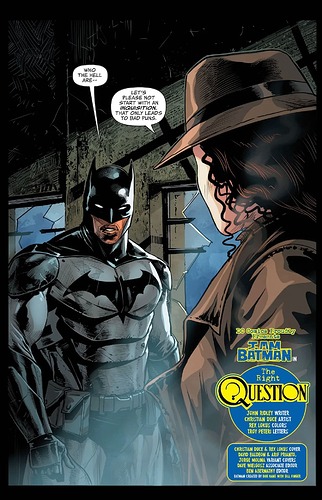 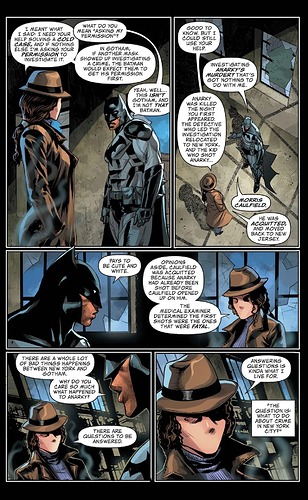 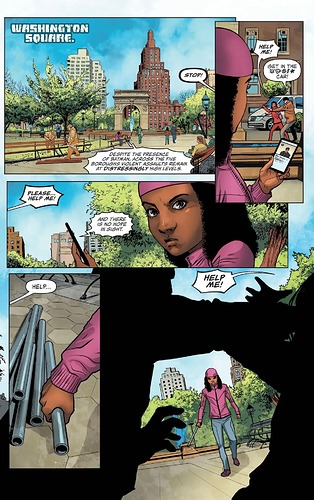 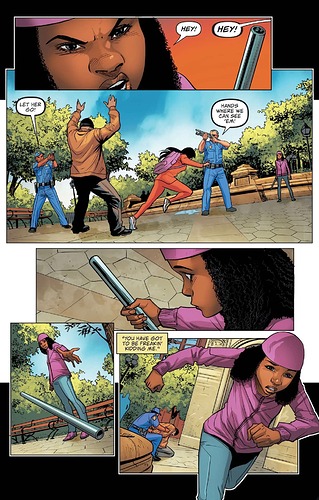 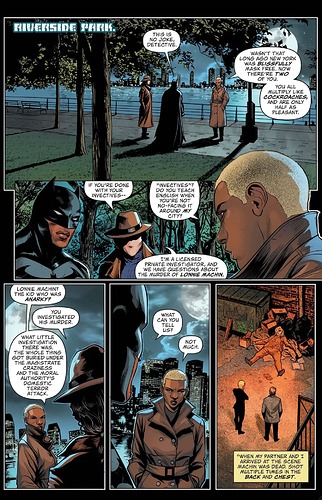 Yeah, Christian Duce just does not draw a good Batman, in my opinion.

I mean, how do you get hired as an artist at DC and not draw an insanely good Batman?

That was would seem like it’s part of the hiring process: what’s your name, and let’s see how you draw Batman.

I went to NYU, and John Ridley as well is an alumni, so we know Washington Square Park.

And Riverside Park nicely done. And he draws everyone else well, except for when Jace dresses up as Batman. Weird.