How does superman cut his nails?🤔

If he is invulnerable and cant be cut open or cut period, than how the heck does he cut his nails? Please explain

The super strength he applies to his nail clippers counteracts the super durability of his nails.

But still… that means that his super strength should allow him to stab himself.

This is probably the weirdest version of the question “what happens when an unstoppable force meets an immovable object?”

He chews his nails. Super-enamel, and a super gross habit.

The clippers would break before his nails would. Maybe he has a red sun desk lamp that drains his hands’ invulnerability?

If you read volume 9 of Dc Rebirth:the flash, the flash actually uses that question on trickster when both the trickster and himself are infected with the strength force.

Alfred clips them when Bruce stretches and yawns at the breakfast table. “There we go, sir. Ready for the day.”

You see, Superman and Batman play poker on Tuesdays. The next morning, the two goof around with a game of You Do What I Do. Hence the yawn, with Superman doing what Bruce does. Then it’s time for Alfred to get those nails when he has the chance, using clippers modified from a triple heat panini press. There’s a trick to everything.

The Fortress must smell horrible

He bites his nails or burns them off with heat vision 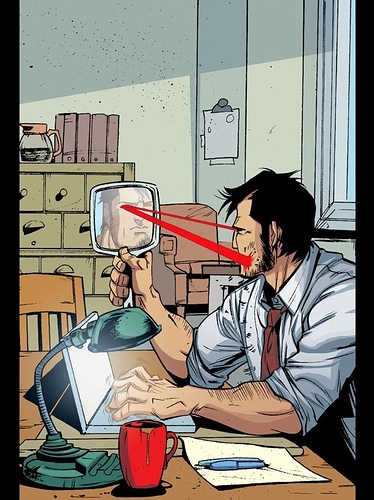 I Can’t breathe after reading this thread​:joy: