Oh yeah, they retconned him to be the first mutant. It works in some cases, at least when they want him in the X books but everywhere else it just never worked.

What’s Namor up to these days?

No idea. The last time I read anything from Marvel was 1/21/21, thanks to a list I have been keeping of every comic I read.

Don’t get me started. 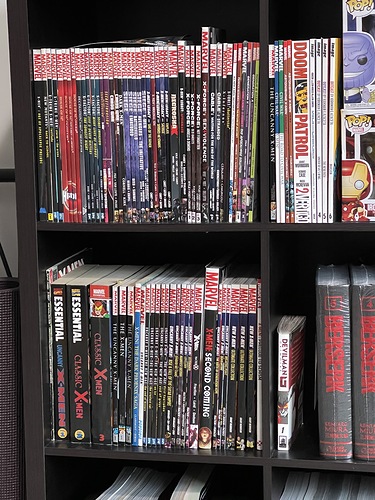 Morrison’s is definitely top-tier, though given all the “recent” news coming out with Joss Whedon, seeing any of his work that I’ve enjoyed in the past feels rather bitter.

Also, the House of X/Power of X by Johnathan Hickman and the Dawn of X line that came out of it has all been pretty damn good.

What’s Namor up to these days?

Last I heard, they were kind of putting him more on a villain path these days. He was apparently a big antagonist in Chip Zdarsky’s Invaders miniseries and in Jason Aaron’s Avengers.

Anyway, definitely going to try to make it to this one!

Nice books! I had many of those a long time ago.

So, Namor’s back to his ways of being a weiner that moves in on other guy’s gals?

He just needs to ditch the metal shorts. Then he’d be much more personable.

…said nobody, because Namor almost always has a chip on his shoulder about something.

I don’t think he’s tried to steal anyone’s girl since trying to get Emma Frost from Cyclops back in the Utopia days. He is wearing a little more clothes nowadays, though he’s still showing off his pecs and abs because reasons. 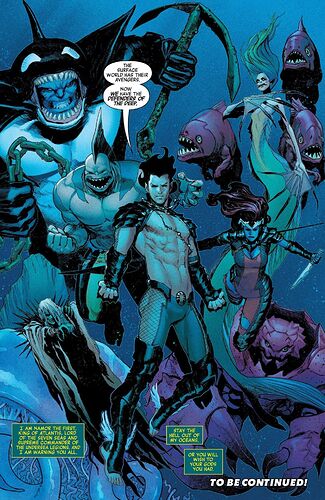 Wowee! The Tenth Circle is indeed a weird ride. JLA vs vampires in all of its mind-bending glory. This story acted more as a lead-in for the (at the time) upcoming Doom Patrol book. That doesn’t mean this is not an enjoyable JLA story, in fact, I found it to be a lot of fun.

What isn’t to like about a mind-controlled Superman, smirking Batman, and a few great Flash and Wonder Woman scenes. The finale was kind of weird, but I can’t hold that against the story. Actually, there were many times this felt like an X-Men book and I was expecting to see a baseball game on any page.

The art was solid with Byrne’s pencils and Jerry Ordway’s inks. I think the inks did a lot to help move the story further into the chaos that happens. The depictions of Superman vs Wonder Woman were excellent.

I liked The Tenth Circle just fine. I read it in full after its original trade release in…2004 and am re-reading it for this run.

A solid, yet underrated, tale for sure.

It’s funny, after reading this I do seem to remember now having read this from the local library back when I was getting into comics. Didn’t remember much about it, just remembered that I read it. Does that make sense? Anyway.

I will say it definitely feels like Claremont X-Men, but not peak Claremont X-Men, more like…the weird Dire Wolves stuff before Fall of the Mutants, or the stuff with Teenaged Storm, or just…all of X-Treme X-Men in general.

The art was solid, but the writing was kind of poorly paced. It’s decompressed Claremont, which just feels…weird, like he knew he didn’t have enough story to make it to six issues so he padded it up with other eh stuff. The addition of the Doom Patrol was interesting, as was what I think was supposed to be a new version of Angel & The Ape with Nudge and Grunt, but the villains never worked for me and it was just full of filler.

It was interesting to read, but more as a curiosity, of seeing Claremont handle a different publisher than Marvel.

It was interesting to read, but more as a curiosity, of seeing Claremont handle a different publisher than Marvel.

I read another JLA horror story with Claremont writing it.

[image] I picked up JLA: Scary Monsters the other day at the comic shop hoping I found a hidden gem. #house-of-horror-club had recently read a JLA story written by Chris Claremont. Needless to say, I was down for more Chris Claremont penned JLA horror stories. The cover art for each issue is done by Art Adams and Guy Major. Each cover is a piece of art, even when it supposed to convey umm scary monsters. [image] My favorite cover is issue 6. Overall, the story is kind of meh. Claremont is a…

I can’t help but wonder if these are failed X-Men stories and he played color by number replacing Wolverine with Batman, Cyclops with Superman, Rogue with Wonder Woman, etc.

I think Wonder Woman had more in common with Storm, so much so that I was waiting for Crucifer (also, not sure if bad name or so bad it’s good) to fall in love with her and try to marry her.

This would be an excellent topic, what DC characters would fill the cast of X-Men. Hmm, I wonder if that is allowed.

There are YouTube videos with every Californians ever. I think I might watch those this weekend. I have seen every Stefon and Chad ever. Stefon had the most impressive story arc that I have ever seen in a Weekend Update skit.

Stefon is one of the best original characters easily on Weekend Update & in SNL history. I don’t say that lightly. My SNL cast in high school was Farley, Spade, Nealon, Hartman, Rock, Sandler, Norm etc. etc. that’s not even listing the females who were great too. Just the Star power behind the males I named is why I just went for the most famous.

Stefon cracks me up. Anytime I come across a clipI have to watch.

Same. Idk how Hader makes it thru without laughing. He can’t help it & does break character here & there. But it works cuz he just integrated the laughing & covering his mouth as a character trait of Stefons.