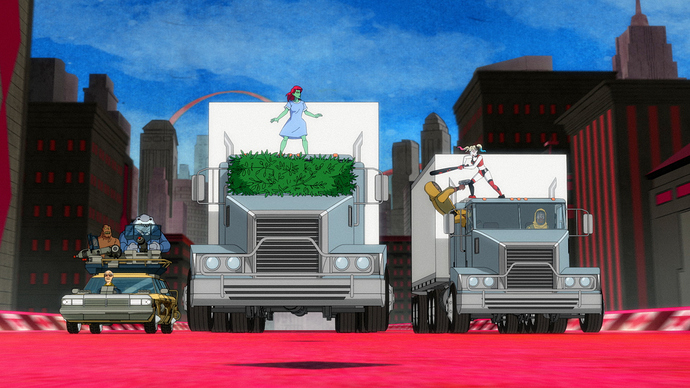 Harley gathers the crew together and while they agree to help Harley rescue Ivy, they make it perfectly clear they are doing it for Ivy and are not Harley’s crew any longer. It is during this rescue that they realize it isn’t just Scarecrow, but the entire Legion of Doom!

We finally get to see the masterpiece that is Harley Quinn Highway as the race after Scarecrow and his goons to prevent them from using the altered Fear Toxin they created using Ivy’s pheromones.

Great to see this one get back in form. This series seems to work best when the crew is together: King Shark, Dr. Psycho, Clayface and Harley. Some other random observations about this episode: 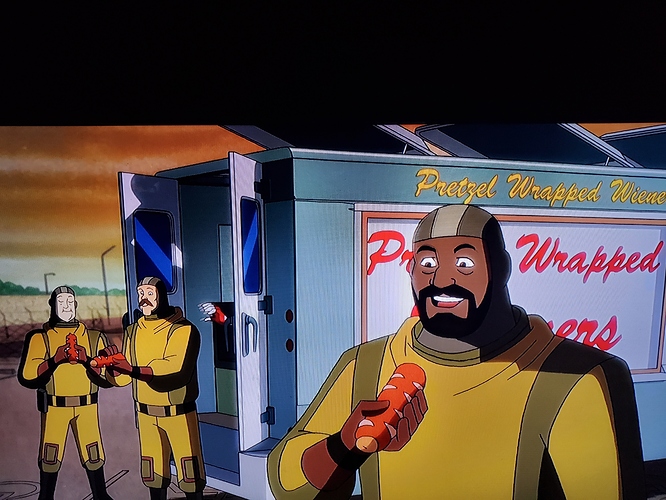 This is in my top three favorite episodes of season one. 4.5/5!

I am in complete awe over the vore reference in the preview. Holy ■■■■.

I enjoyed this episode a lot! It was good to see Ivy almost escape on her own. I hope Harley doesnt let her down again and what are they going to do about the killer trees?

Looks like the LOD and Scarecrow actually won for now.

Lil’ Ivy all alone on her birthday 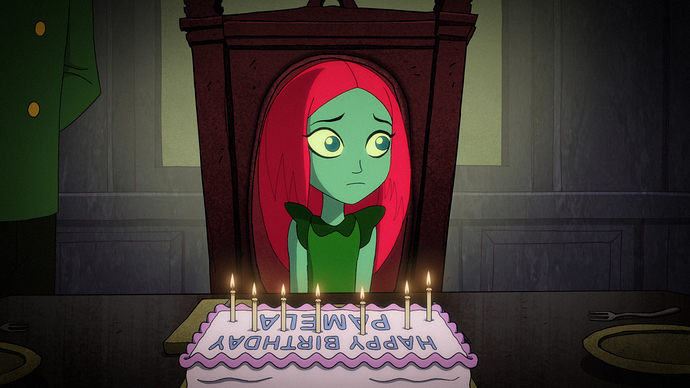 The crew becoming a family is the best thing about this show. I love the bonds they’re all developing and how well done that development is being executed.

“You put your thesis at the motherfu***n top!” Lol I love frank so much

Love seeing what the crew was doing after leaving Harley

Yeah, it actually looked like an Apple store. Somehow that is even funnier to me.

I was also questioning my choice to eat lunch while watching this episode.

Dang, good to have the crew back together and is it just me or is this one of the few shows that just gets better and better?

Hoping the outbreak of nightmare tree monsters requires the assistance of Robin next episode. Ivy is one hell of a shot. As funny as the crew are as individuals they are that much funnier when they are together. And more screen time for m’man Frank? This show keeps nailing it.

A lot of funny one liners in this episode.

Poison Ivy reveals that she is immune to poisons and yet they used poison gas to capture her?

The crew only helping Harley because Ivy. Put your motherf****n thesis at the top Harley

The absolutely hilarious realistic take of Harley and the crew stealing the guards uniforms and they don’t fit. The fact that it was stretched over Sy Borgman’s scooter was perfect visual comedy.

Sy was really great this episode, killed a whole room full of guards and somehow found the time to braid Ivy’s hair. Watching him transform was funny but uncomfortable to watch.

Ivy opening up to Harley about what’s wrong with her. I really felt that. Also anyone picking up on some romantic undertones with these two or is it just me?

Like in Batman: TAS she’s immune to Joker laughing gas but can be defeated by weed killer

TuRN InTO A CaR MORty!

I lost it with the hazmat suits. It’s about time more shows/movies show that it’s impossible to knock out a bunch of people and magically, their clothes fit. That scene was just amazing.

Anyway, glad Harley pulled the gang back together for this. There’s nothing I like about Sy, but he didn’t annoy me as much as he usually does.

And Harley being Ivy’s biggest fear was unexpected, yet perfect. Ivy touched on before that Harley was the only human she cared about. Harley treated her like crap. Of course that messed her up. Can’t wait for them to crawl back from this one, but they need a real talk to truly repair that friendship.