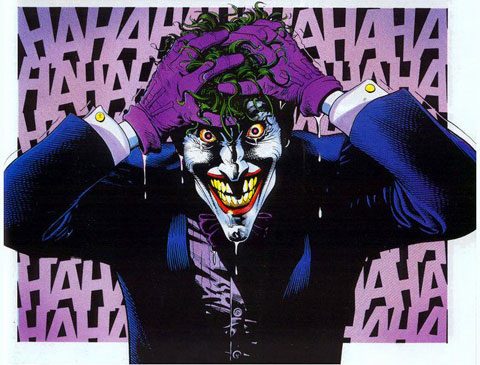 Y’all can even include Batman: Arkham Aylum the video game as a favorite if ya want or the dark knight movie.

Detective Comics #826 or Batman: Arkham Asylum. The Laughing Fish is also up there.

The Laughing Fish and The Batman Adventures (1992) #3. Killing Joke is severely overrated.

Not the Killing Joke

Definitely the killing joke is up there. Love the flashbacks of joker when he was just a normal guy trying to get by and support his girlfriend. It makes you relate to him and care for him with good backstory

@MisfitH then if it’s not the killing joke then what’s your favorite Joker story?

It’s certainly between The Killing Joke and “The Joker’s Comedy of Errors” from Batman (1940-) #66. Unfortunately, The Killing Joke may have inadvertently ruined the character for future writers. Once you take the Clown Prince that far in an in-continuity story (as opposed to The Dark Knight Returns, for instance), there’s really no going back.

Death of the family.

“The Laughing Fish” & “Sign of the Joker”
by Steve Englehart and Marshall Rogers
in “Detective Comics” #475-476.

I really like Azzarello and Bermejo’s Joker. Another favorite is Lovers and Madmen.

I have a feeling I’ll be adding Lemire’s upcoming black label book “killer smile” to that list soon.

Oh, and of course the Man Who Laughs.

Everyone has mentioned the best Joker comics I can think of. I just want to say that I’m really looking forward to the Three Jokers story. What book is it where Batman learns of the 3 jokers? Is it Darkseid War?

The Joker, issue 4: Gold Star For The Joker.

That series is great, it shows the randomness and specificity of The Joker and how he is truly an agent of chaos. Which makes him much more menacing than his KJ and post-KJ incarnation.

It also shows that he is one of the sanest characters in DC. Sure he’s a sociopath, but a very highly functioning sociopath. Which is much more frightening than the psychopath KJ and post-KJ make him out to be.

They could easily retcon the Joker back to a sociopath. Just start tweaking his storylines a bit. It’s a matter of want not can.

The Laughing Fish has always been a favorite, and the two stories from Batman (1940) #1.

To me, my favorite Joker story will always be the BTAS episode Joker’s Favor, where he pushes a normal guy too far.

Y’all I’m gonna have too read the laughing fish story, seems too me like a lot of u guys like it. Also I read the man who laughs yesterday, great Joker story.

A bit more left field, The Joker #5-- the Clown Prince of Crime takes down the Royal Flush Gang because they’re in his way, and spoilers! Doesn’t go to jail at the end-- instead the last panel is one of police cars chasing the Joker mobile. Somewhat subverting the comics code while not wholly violating it. Actually, I always loved this whole series.

@DesSadeAcolyte Issue 4 is more proof that Elliot Maggin should have been given a Green Arrow book.

@dylankneer.10404: Start with Detective Comics #471. It doesn’t involve the Joker until 475, but The Laughing Fish is the climax of a story that was already happening involving several different villains.