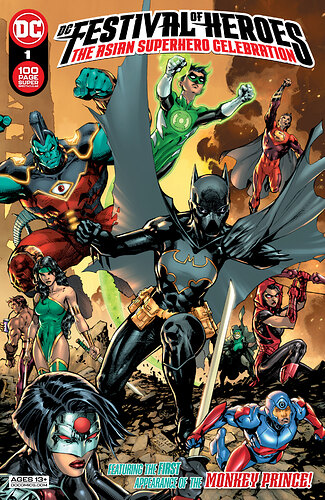 DC Festival of Heroes: The Asian Superhero Celebration , is an incredible anthology spotlighting DC’s past, present and even future Asian super heroes, featuring some of the most dynamic Asian storytellers in and out of comics. Featuring an incredible cover by the team of DC Publisher and Chief Creative Officer Jim Lee, and colorist Alex Sinclair, this anthology includes a foreword by activist and CNN and WSJ Online contributor Jeff Yang, a selection of tribute pinups of DC’s Asian super heroes, plus an awesome variant cover featuring Cassandra Cain by artist Stanley “Artgerm” Lau. 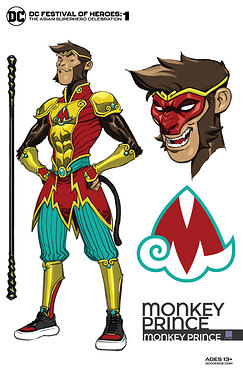 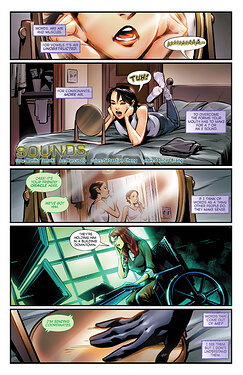 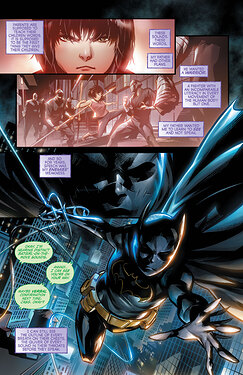 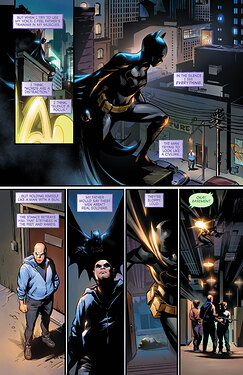 Synopsis: Grab your favorite boba and pull a chair up to the dim sum table as we celebrate Asian Heritage Month with all your favorite Asian DC characters, old and new! Join Cassandra Cain, Katana, Green Lantern Tai Pham, the Atom, Dana Tan (a.k.a. Batman Beyond), Red Arrow, Lady Shiva, Damian Wayne and the al Ghul clan, New Super-Man, and more as we present new tales of these characters from their thrilling history! Plus, Cheshire Cat’s relationship to Cheshire is revealed as Shoes asks Selina Kyle to take her under her wing as Cat Girl. And that’s just the start!

This 100-page commemorative anthology is a great way to celebrate Asian American and Pacific Islander Heritage Month, awesome storytelling, and DC’s Super Heroes when it arrives in comic book stores and on participating digital platforms on Tuesday, May 11, 2021.

Will you be picking up DC’s FESTIVAL OF HEROES next week? Let us know in the comments below!

The art in the previews looks gorgeous! I can’t wait!

The art and teases look great, look forward to this.

This is exciting! I’m really interested in the Monkey Prince

This preview is perfect. Wheelchair Barbara. Cass learning to use language. That Marcus To art! This team GETS IT.

I’m freaking out, this is already the best Cass content since Shadow of the Batgirl

Cassssss! This is already so good. I can’t wait for this.

i know Im so hyped!

I see O.M.A.C. on the cover but I don’t see any mention of him in the Synopsis which worries me that he won’t be getting his own story in this anthology but I’m still happy to see him and I’ll definitely be adding this to my pull list at my local comic shop. Hope this becomes an annual event/issue.

I see O.M.A.C. on the cover but I don’t see any mention of him in the Synopsis which worries me that he won’t be getting his own story in this anthology

I THINK if I remember right OMAC was in a story that Amy Chu was writing that including him as well as Katana and someone else, but I could be wrong there.

Anyway, definitely looking forward to picking this up.

I don’t know which cover to get, Cass or The Monkey Prince? I may have to buy both, which I usually don’t do these days. Lol!

This book is worth buying for so many reasons, but my top three are:

Now to decide if I want it in digital or print…

Wonder if the Monkey Prince will be any relation/connection to the Monkey King from Alan Moore’s Swamp Thing #25? 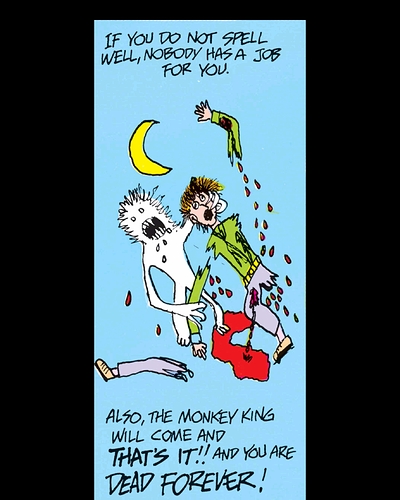 How odd that this thread doesn’t include the synopisis from the solicit. Lemme remedy that…

"In Yang and Chang’s original 12-page story, The Monkey Prince Hates Superheroes, Monkey Prince battles and teams up with Shazam to defeat both Dr. Sivana and a Chinese deer demon spirit. Additional stories include:

“Masks” – Ram V, writer of Catwoman, Justice League Dark, and The Swamp Thing, teams up with Audrey Mok, the artist of Sera and the Royal Stars, to tell a story featuring Jade Nguyen, a.k.a. Cheshire. Tying into V’s Catwoman run, Selina Kyle’s protégé Shoes has visions of being rescued as a child by Cheshire. Shoes takes these visions as a sign, donning a mask, taking the name “Cheshire Cat,” and asking Selina Kyle to train her. But is Catwoman ready to take on a sidekick?

“Sounds” – Detective Comics writer and Eisner Award winner Mariko Tamaki (Harley Quinn: Breaking Glass) and artist Marcus To team up to tell a story featuring Cassandra Cain, a.k.a. Batgirl. Batgirl struggles to understand words, but with her ability to read body language and uncanny fighting skills, she really doesn’t have to…until she meets someone and wishes that she had the right words—ANY words—to say to them!

“What’s in the Box?” – Cassandra Cain steps into the spotlight once more, but this time with Colin Wilkes, a.k.a. Abuse (who first appeared in Detective Comics #947, October 2008), courtesy of words and art by Dustin Nguyen. Abuse finds Batgirl sitting by a bridge, upset by a comment made by Damian Wayne.

“Dress Code” – Green Lantern Tai Pham makes his first comic book debut in this story by Green Lantern: Legacy writer Minh Lê with artist Trung Le Nguyen. Green Lantern is fighting with Arkillo, and the villain taunts him for his costume “looking like a dress.” This reminds Tai of a memory with his dead grandmother who he inherited his powers from.

“Festival of Heroes” – In a story by writer Amy Chu and artist Marcio Takara influenced by current headlines, Katana, Cyborg, and Blue Beetle (Jaime Reyes) are asked to safeguard an Asian American and Pacific Islander community celebration against potential violence from a white supremacist group. But the heroes are quickly reminded that you don’t need capes, masks, or even special abilities to be a hero.

“Hawke & Kong” – Writer Greg Pak and artist Sumit Kumar team up on a story spotlighting the return of onetime Green Arrow Connor Hawke and Kong Kenan, also known as New Super-Man. Connor and Kenan need to do some quick thinking when a gift for Connor’s Korean aunt gets damaged in a battle with a dragon!

“Special Delivery” – Master of None writer Aniz Ansari makes his comic book debut with artist Sami Basri in this story featuring Robin (Damian Wayne). As Robin ponders about his heritage, he slowly discovers that something about this pizza place seems off…

“Kawaii Kalamity!” – Shadow of the Batgirl writer Sarah Kuhn and illustrator Victoria Ying (Diana: Princess of the Amazons) tell a story about Red Arrow’s reluctance of enjoying “kawaii” things because of people’s general assumptions of what she likes simply based on her Japanese heritage.

“Family Dinner” – Amazon juggernaut Grace Choi has to meet her girlfriend Anissa Pierce’s dad for dinner. But when your girlfriend is Thunder, that means meeting the parents is that much more stressful because her father is Black Lightning!

“Perceptible” – The Good Asian duo of Pornsak Pichetshote (writer) and Alexandre Tefenkgi (artist) tell a tale featuring The Atom (Ryan Choi) trying to defeat a microscopic robot sent from the future…to save our reality as we know it!

This 100-page commemorative anthology is timing for Asian American and Pacific Islander Heritage Month and will be published on Tuesday, the 11th of May, 2021."

With just one day left, here’s a few interviews to sink your teeth into until the main course of this gorgeous anthology arrives (Shout-out to Jess Chen, DC editor AKA the babe who said “hey, the DC Community should name Nightwing’s doggo!”): 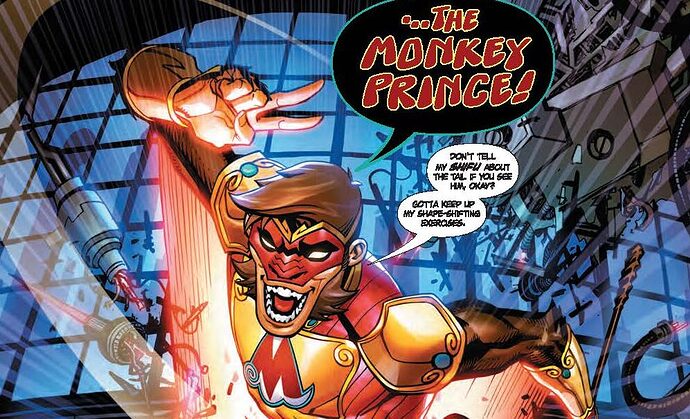 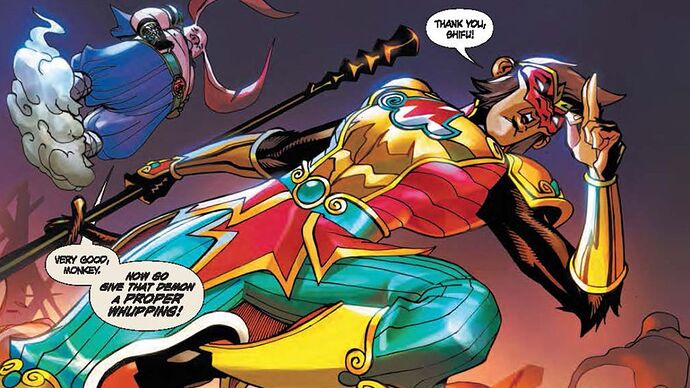 Inside the DC Comics celebration of Asian superheroes and Asian creators with...

With classic Asian DC heroes, and a few new ones - like Monkey Prince

Im impressed! I picked it up and ive found it to be a wonderful read.

Sounds had beautiful artwork and was a simple and short story

Hawke and Kong was an amazing story and I never realized id enjoy such a great team up. Made me really appreciate Conner hawke.

Nguyens story was short and sweet.

Grace Choi had an intense ‘meet the relatives’ moment! XD

And I thought the Monkey Prince story was really neat! His parents are evil minions! Wow!