It’s been a while since we got new Earth One books. The last two I remember were Green Lantern Volume One and Wonder Woman Volume Two. If memory serves me right, it’ll be a while before John and Frank do the third Batman book, and we were supposed to get Aquaman and Flash a long time ago.

Given the format of these books, they take a while to produce. I just hope DC continues with them, because there’s a lot of good here. Earth One: Titans was amazing! Which is weird because that’s not a group I’d expect to have an Earth One title.

Do you have a favorite among the line? Is there a volume you’re waiting anxiously for? Is there a character you’d love to see get the Earth One treatment? Lemme know below. 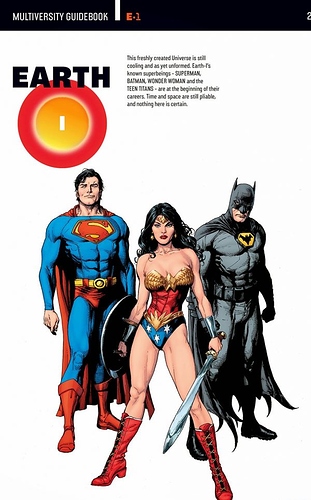 Most anticipated: Flash or Aquaman, whichever Straczynski was supposed to be writing.

I really dig Morrison’s Wonder Woman. Paquette’s artwork makes the whole book such a gorgeous package. The layouts are super cool. Don’t mind that it takes him a minute to make it.

@CaptThunder001 Shazam would be outstanding!

I wonder how something like Green Arrow would work out in Earth One.

Morrison and Paquette are apparently working on WW: Earth One Vol. 3, and Johns/Frank will work on Batman: Earth One Vol. 3 after they’re done with Doomsday Clock (which only has two issues left, so I’m sure it’ll be starting up [again possibly?] before too long).

As I recall, Francis Manapul has also talked about doing an Aquaman: Earth One, and I think someone else was doing a Flash: Earth One.

This is more of a pitch than a wish:

The Flash: Earth One
—————————————————
The Flash actually witnesses the murder of his mother by his father. He’s distraught, understandably, and spends his entire life studying crime investigation to somehow overturn the image of the scene in his head, to somehow prove against all facts that his father didn’t do it. He doesn’t visit Henry in jail for fear of him simply telling Barry that he did murder Barry’s mother, Nora. On the day that he finally finds evidence that could be used to further an investigation into whether or not Henry Allen was guilty, he visits him to tell him the good news. It is there that Barry’s father admits that he was the one who killed Nora, and Barry snaps. He runs back to his office at CCPD and smashes his CSI tools, his life’s work now made useless. As he’s doing this, the fateful lightning bolt crashes through the window, hitting Barry in the chest as he is about to throw his forensic chemistry set on the ground. Nine weeks later. He wakes up in the Central City hospital. Everything around him seems to move in slow motion. We cut to a desolate future. A man is dressed in a yellow suit, but the panels never show anything more than a foot or a hand of it. The dialogue in the scene is between this man and another person (off-panel). They are talking about whether or not what they are attempting will work, and if it does, what that will mean for them. We cut back to the present. Barry Allen in this universe has basically become the Joker. He uses his newfound connection to the Speed Force to engineer as much chaos as possible. The government has designed a rival super-soldier in the form of Captain Leonard Snart, from whom we get the idea that he joined the army because of his abusive father, but it’s never explicitly stated.
The two are fighting. “Captain Cold and the Flash”, as they have been dubbed by news reporter Iris West. A bolt of red lightning strikes in the street and zooms off south, and the Flash seemingly disappears with it. Barry suddenly finds himself on a cliffside of a snowy mountain. He is punched by a yellow-gloved hand. Then kicked by a yellow-booted foot. He doesn’t understand; only he can move this fast. One more punch to the face and the Flash is sent straight backwards into the rock wall. Then the man in the yellow suit reveals who he is and why he came here. He is Eobard Thawn. He came to stop Barry before he can destroy the world and create the future that he came from. Barry doesn’t say anything, and the two begin to fight. They zip from location to location. Punch to Japan, kick to Africa, throw to Canada. The damage caused by this unbridled use of the Speed Force is catastrophic. Earthquakes, tsunamis, tornadoes. All over the world, cities are collapsing. People are dying. Finally, Thawn deals the killing blow to Allen. He gives a monologue about his live in the future, and how Barry had ruined the world for everyone. He runs around the world (Superman: The Movie-style) and zips forward in time to see the world the same as it was before. Unable to reason that he might have caused this, he goes back to the lab where he had designed his powers and his suit, and he sees the doctor that he had been talking with in the earlier scene. She asks why he didn’t succeed. He says that he did. She asks what could’ve gone wrong. He’s silent. He goes over to the console. The timeline is still one continuous loop. He hasn’t changed anything. He does a universal scan for any trace of the Flash, and he finds one on the timeline the doctor has designated Earth-0. He then says “What went wrong is, there’s always more Flashes”, and in the corner of the page we get a teaser for the next volume that says “The Flash of Two Worlds”.

I like that idea – not sure if it works as is for an Earth One book, maybe as an Elseworlds/What If sort of story.

…Unless, after getting his ass handing to him by Barry, Eobard goes back in time for one big last-ditch effort: instead of having Henry Allen kill Nora, Eobard pushes Henry out of the way and kills Nora instead. With that, the timeline changes, Barry is a more heroic Flash now, and Eobard becomes more jaded and for himself seeing history change so that he becomes the greatest monster in history.

@Jay_Kay
That is a REALLY good idea. I hadn’t even though of that. I made an edited version of it that’s a little longer in Fan Creations where Eobard zooms through different points in time as he’s going back to the future and accidentally leaves a footprint in the Allen house when Nora is being murdered. The idea was to explain the evidence Barry found at the beginning of the story that basically turned him into the Flash. What you came up with might actually be a better ending… I might write a script for this if there’s interest, and if I do I’ll probably change that last paragraph or so.

I’m hoping we get more of these soon. There’s something incredibly fun about picking up an Earth One story from the comic shop, taking it home and reading it in one sitting. I guess that’s how they’re meant to be read–then again you can read most comics like that–but there’s something to the experience. I liked the Green Lantern one and I still need to get volume 2 of Wonder Woman.

Like I said at the top, I really hope we’ll one day see the Flash and Aquaman Earth One books come out.

@superby1
I really want a GL2 as well. Gabe Hardman should be bigger than he is.

I loved what they hinted at with the last GL Earth One book and would love for them to follow up on it.

I’m secretly hoping this weekend at SDCC they’ll finally announce the Aquaman and Flash book, but I know that’s hoping for a lot.

@superby1
Yeah, it’s unfortunate. As sad as it is it might actually go down the drain with Vertigo when that dissolves.

@batwing, I hope it stays around. If they ever finish Doomsday Clock, Johns and Frank have another Batman volume. So here’s hoping we at least have that to look forward to

Morrison has always said that there will be 3 books of Wonder Woman. And there is proof that a third Batman book is in progress.

Always happy to get more Earth One

Read all the Trinity Earth One books and thought they were all fantastic. Have the Green Lantern book but have yet to read it.

Ive often wondered what an Earth One Atom would be like.