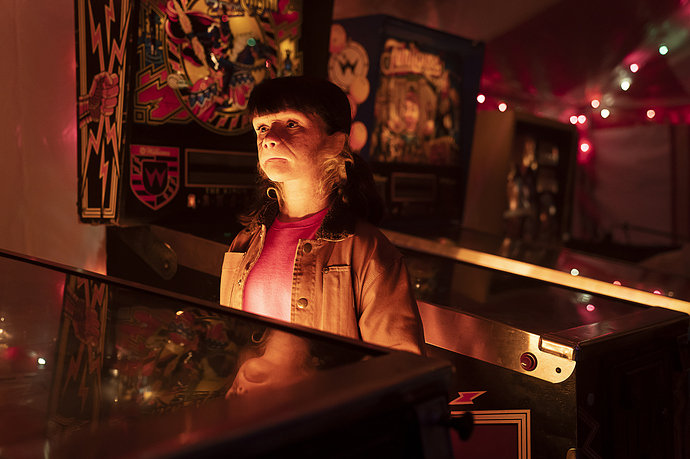 It wouldn’t be a finale if we didn’t start with a flashback and this one offered some puzzling clues. Milwaukee 1969 – Jane is working at a diner; a man with a guitar outside begins flirting with her. She tells him her name is Miranda and she’s from many different places; he reveals he bought her a necklace with all the nickels she has left him.

We flash to the present at Doom Manor to find Cliff stressing over t-shirts for his daughter Clara’s wedding, Vic wallowing in heartbreak and self-pity, Rita joining in on Vic’s self-pity, and Larry, well, he’s just being Larry.

However, Herschel shows up and lets our fearless heroes know about Candlemaker and the fair, so they rush out to go, once again, and stop the world from ending.

Willoughby Kipling meets them at the fair – and reveals that the Candlemaker has already unleashed an army of imaginary friends on the world to kill everyone. Rita meets her imaginary friend, Mademoiselle Roxy – an amalgamation of magazine cut-outs; Vic meets Doctor Cowboy, who looks like Silas Stone; Cliff meets Jesus.

We get to see some more of Jane/Miranda’s past and learn exactly why Jane became primary and Miranda threw herself into the well. The personalities are also turning on Miranda as they start to question where Jane is. Even Kaye wants to know and the revelation is something no one expected.

If you haven’t watched episode 9 yet, make sure you do then come back here and let us know what you thought!

Clearly there should have been a 10th episode. One of the best lines ever: I had to believe in my dad. You know what that’s like.

WHOA!! This is one of my favorite penultimate episodes ever!
Can’t wait to see the finished finale whenever that comes.

Dorothy facing the Candlemaker on her own is DOPE.
That final scene was perfect: the music, her summoning a weapon, her reaction to seeing the team was so sad/painful. Great acting all-around.

Also what a creative way to have the characters face their inner turmoil through imaginary friends.
Miranda’s story especially was so engrossing I lost track of time.

The look of Rita’s imaginary friend was so cool & perfectly in-tune with her character.
Kick-Ass Jesus… only on Doom Patrol lol

Yeah they were filming the 10th episode but because of Coronavirus shutting down productions everywhere they couldn’t finish the last couple scenes they needed so we got 9.

Edit: wow… 14 likes… this post has more likes than any of my other ones… thanks

I think this was my least favorite episode so far.

The exchange with the imaginaries fell flat for me.

The buildup with Miranda’s boyfriend took a long chunk where the episode was flatlining and ended in a swinger’s party that felt kind of ehhh. Like when a show throws in a lot of nekkid and sex and really tries to connect it to the plot but somewhere it still doesn’t feel like a natural part of the show.

Jane then pretty much going out on a hate speech against all swingers because her bf was an absolute ass also felt ehhh.

Also the whole buildup with Cliff and his daughter felt like it lost its payoff. He didn’t end up with a character advancement. He also didn’t get any meaningful scenes in exchange for ignoring his daughter. It just gave us a subpar Cliff episode.

Then the Covid-cutoff was just icing on the cake.

Maybe I’m hard on it, but this episode didn’t fly for me. A season finale needs to leave me wanting more to return to next season. This didn’t do that for me.

Jane then pretty much going out on a hate speech against all swingers because her bf was an absolute ass also felt ehhh.

That part did make me cringe honestly. Jane’s whole blanket statement on how it was all about the men in control not even knowing the girls personally if they are in the mind-set that Miranda was in or not was very ehh to me.

Only reason I look past on it a bit is because it made sense that Jane said that since she doesn’t like or trust men and this whole event was the source of all that I guess.

Well looks like Cliff won’t make it to his daughter’s wedding after Jesus dismantled him. So wish they could of finished the 10th episode because I want to know what happened to Dorthy and who Miranda really is. Looking forward to the next season.

Way too big of a cliff hanger!! When will the show be back!!!

Pretty disappointed in this one, but knowing the production issues it’s understandable.

Woohoo! Go Jane. When she punched that douchebag I literally cheered. Now that I know how Jane’s personality came to be I have so much more respect for the character.

She was completely right. Not a single person in that room knew anything about real love or freedom. Go Jane!

Hmmmm this wasn’t very good at all.

This episode just felt…off. It’s still good,but knowing that there was supposed to be 1 more episode as well as how this one ended just left me…dissatisfied. They need to put out episode 10 as soon as they are able. Then start on season 3 which,in my opinion, should have the return of mr nobody as well as the supervillain team the Brotherhood of Dada as a counter team to the doom patrol

It didn’t feel like a finale but I completely understand the situation. I honestly was expecting a Post Credit Scene, but overall great episode. My favorite part was when Cliff asked Jesus if he didn’t get in trouble for using his own name in vain LOL. Can’t wait for season 3

I really expected a more ‘finale’ vibe with the conclusion of Candlemaker since the episode was called ‘Wax Patrol’ but once we started to get Jane flashbacks I figured no way we’re getting that.

She was completely right. Not a single person in that room knew anything about real love or freedom. Go Jane

Agreed. There’s a reason why polyamory is most prevalent in cults and other harmful groups of that sort. People who think they’re “spreading love” and “exploring their freedom” are clueless, and have no idea how much harm they’re doing to themselves and others.

P.S. Since Season I have thought Diane Guerrero should get an Emmy/Webby (or something) for her multiple personality acting.

What an awesome episode! Sucks that they didn’t get to film the 10th of the season. Hopefully, they can take a page from Zendaya’s book and work out the quarantine filming thing.