Just got issue 1 and can not remember being more excited to read a new comic. What did yall think? 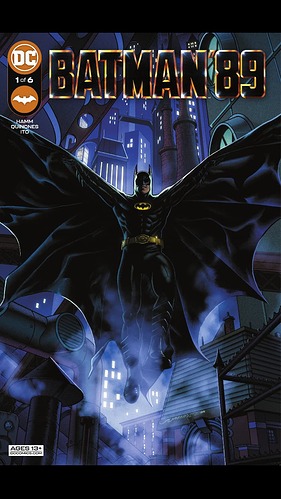 I enjoyed it! It feels like a good continuation of the previous two movies. I really enjoyed how they explored Harvey Dent’s character in this one, going into his backstory and where he came from. It makes me really wish that Billy Dee Williams could have played this role because it seems like he definitely could have pulled it off.

The only thing that…I wouldn’t say it’s bad but it’s odd is how Barbara Gordon is utilized. Making her a Sergeant in the police department is okay, I guess, but I do find it odd to have not only be openly antagonistic to Batman, but dating Harvey Dent. I mean, it’s written well enough, but it just doesn’t feel like Barbara Gordon to me. Like, if they made her…hmm, let me think…Ellen Yindel, she would fit far better for this story.

I agree that the Barbara Gordon thing is weird but at the same time is accurate to the strange changes that happen in comic book films. It’s also easier to accept when viewing this similar to an Elseworlds story. It feels like a lot is crammed in but we will see how it plays out.
I liked the costume nods to Burton’s other films on the first page. 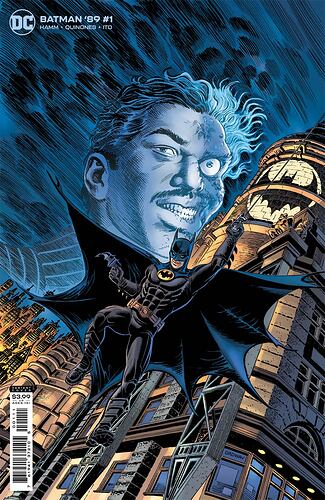 That is a great cover – and it’s so fitting to have Jerry Ordway do one for this series, since he was the one who drew the comic book adaptation of '89 back in the day. 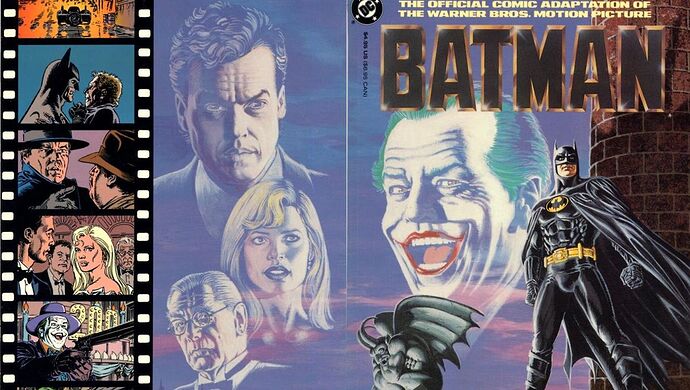 I adored this. Sam Hamm doesn’t write enough comics. And Joe Quinones was born to draw this.

It was a great read I’m glad I read the digital copy since my comic shop actually sold out of physical copies before they even got to the hold lists.

If anyone wants to read more of Hamm’s Batman, check out his brief arc on Detective Comics #598-600, called “Blind Justice.” You can read it on DCUI starting HERE.

Hello everyone, and welcome to the latest installment of the World of Bats, the Batman Book Club! This week we’re going to continue the celebration of our ONE YEAR ANNIVERSARY holy crap I never thought we’d make it this far – ahem, anyway. We’re continuing with some more anniversary stories with Detective Comics #598-600, “Blind Justice,” written by Sam Hamm (writer of such little indie films like Batman '89) and drawn by Denys Cowan. [image] What starts as a strange mystery of a brutish foe…

I dug it on multiple levels! You first enjoy the novelty of having this comic exist at all, especially since Quinones pitched it so long ago. Then you enjoy seeing the world again after so many years. Then you check out all the Burton easter eggs. Then you actually get into the story itself, and the amazing thing is, even though time has passed in this world, you still feel like you know these people. It’s like coming back to old friends.

I like they’re setting up more with Harvey, getting to know his ambitions and his issues with running against Gordon. I liked seeing Gordon working with Batman more closely than he ever has in both Burton movies.
It’s only a first issue, but it was a well done first issue. A part of me wishes we could’ve gotten the whole thing released a la the Earth One OGN’s, but another part of me is glad I have something to look forward to for the next few months as I read them when they come out.

Hope we can get this issue added to our library!

We’ll get it on DCUI, just starting in…February.

I thought this was supposed to be a digital first?

I believe that was the initial plan for this and Superman '78, but all the excitement/hype surrounding both titles must’ve inspired DC to change them to more normal print titles

I was disappointed with the first two issues, but this 3rd one was great.

I am enjoying it for the most part. Not sure it always xaptures the vibe Burton st in the movies but the story is interesting enough to keep me reading. Wish we could have Seen Billy Dee as Two face on film. What a missed opportunity.

I’ve enjoyed it before, but the third issue really does pick things up. I find what they’re doing with Harvey/Two-Face really interesting. Here it seems like Harvey’s “bad side” isn’t a split personality that’s been brewing the whole time, but a combination of the shock and trauma of the accident, and his own ego and ambition. He sees things happening that should be his and he might be willing to do whatever it takes to get them. It definitely fits a more politician version of the character.

Does anybody else read Drake with a Young Chris Rock in mind?
This would have been two years after his introduction as the Parking Valet at the Playboy Mansion in Beverly Hills Cop II 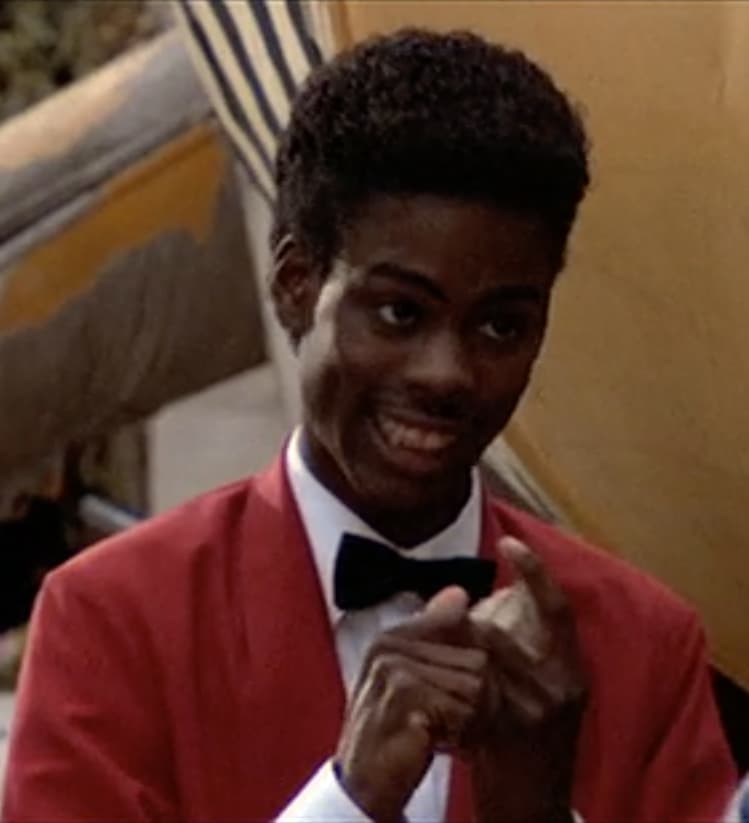 Thought I would drop this here. 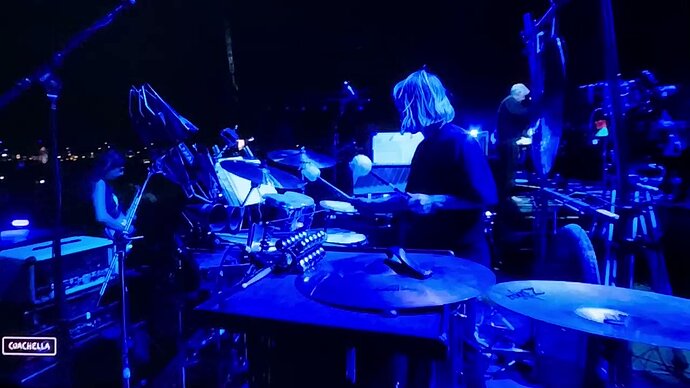 @rotator_
Danny Elfman watching over his masterpiece as it plays (The Original Batman 89’Theme) #Coachella https://t.co/J5Y8XAgoNX

Danny Elfman has just performed his first rock concert in a few decades and throughout the show he had lead an orchestra through some of his greatest hits ranging from Simpsons, Nightmare Before Christmas, and Batman '89s theme.

Okay that gave me goosebumps

Does anybody else read Drake with a Young Chris Rock in mind?

I could see that, but I picture him as Marlon Waynes, considering he was originally going to be Robin in Batman Returns but was cut before production. 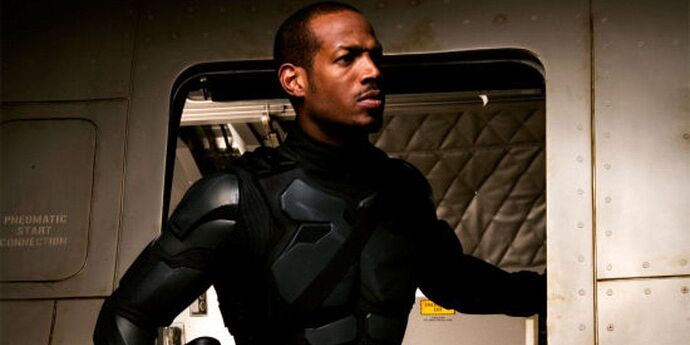 Why Marlon Wayans' Got Paid $100,000 For Batman Returns And Still Receives...

You might be surprised to hear this, but actor Marlon Wayans was paid $100,000 for a movie he never even starred in, Tim Burton's Batman Returns.