Did they really though?

Burton still has the best Batman by far.

Nolan butchered characters throughout his trilogy if we’re being honest.

Nolan remade things well though, the batmobile for instance.

Snyder brought the best story to the big-screen, though too dark for some. 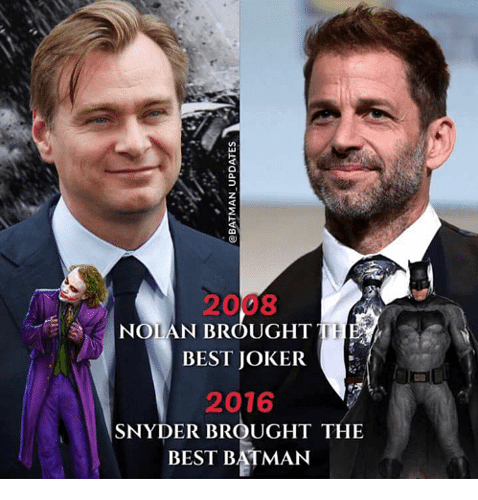 I agree with both of those statements in the picture. 100%

Zack Snyder definitely brought the most Batman who said “do you bleed? YOU WILL” and then scowled real hard.

Nolan wins in both categories for me.

Best Batman, is Affleck. My brother even said that that was a good Joker at the end of DK.

Never liked Nolan’s trilogy. I prefer Burton’s, it’s so gothic and feels so Gotham. Christian Bale’s casting didn’t work either. He looks nothing like a Bruce Wayne and none the less lacks the build for the DK.

Burton’s Batman
Nolan’s Joker
Snyder’s Kal-El
…are in my opinion, the best versions.

Definitely disagree with half of that photo.

I’ve never been a fan of Heath Ledger’s Joker. He was spooky, sure. Unsettling? Absolutely. Menacing? Check. But was he funny? Hell no. He told one joke in the entire film. He didn’t even have a good cackle. And his whole motivation seemed rooted in politics. He acted more like Anarchy than Joker.
For my perfect Joker Hamill sets the bar for voice and tone, and Nicholson for the look. Leto’s Joker even felt better, in my opinion, he just looked unforgivably stupid.

That was my thought on Nolan’s Joker as well, seemed like he wasn’t really Joker, just like Scarecrow didn’t feel Scarrcrow and Bane didn’t feel Bane. Character was stripped in order to share realism within that world, it came with a cost

I liked Ben Afflecks act as batman, but his suit wasnt my fav. Something like TDK suit or Burtons suit would’ve been better imo

The last acceptable Batman was Adam West (not that Michaael Keaton is a bad actor; he did incredible for how horribly miscast he was, especially given that the script didn’t handle the character all that well).

I should qualify that by saying that I’m speaking in terms of live action movies. I’m a hardcore Conroy-and-Hamill devotee for animation.

Snyder doesn’t win anything in any category.

I dont understand why comic fans insist that Nolans Batman wasnt true to the character therefore its not good.

There have been 80 years of Batman comics with tons of different iterations and versions, some good, and some bad. Every writer makes changes to the character when they write him, some of the changes slight and subtle and sometimes their not.

And it even baffles me more when people shit on Nolans Batman for not being true to the character and then they go on and praise Afflecks Batman.

Ben’s Batman was literally based on an ELSEWORLDS version of the character.

TDKR version is a Batman from a world where Superman is a douche and Green Arrow had his arm chopped off. A Batman who hadnt been Batman for 10 years and wanted to have a fitting “death” for his legacy.

On top of that, Zack Snyder even came out and said he didnt understand why people were upset about Batman killing in BvS and he didnt think there was anything wrong with it. He said that people who think Batman shouldnt kill are living in a dream world.

No sh*t, thats exactly what it is. Its a comicbook world. Its a literal dreamworld. Someone dreamed this world up and then put it on paper.

And the fact that this guy missed out on one of the most defining traits of Batman is a serious negative for me.

This video goes in more depth as to the problem with Snyders Batman killing. https://youtu.be/u1FGxb2YlnY

I’m not really a fan of the portrayals of Joker as a man in face paint… that said, 11 years later and Heath Ledger’s Joker is still my favorite.

Reading over my post, I know I seem like a serious Snyder hater. And Im not, I actually really liked his MoS and his version of Superman in general.

But its one thing to acknowledge that Batman doesnt kill and then have him kill under some trope like “he’s reached his breaking point” or something to that nature, but to not even be aware that people view Batman not killing as one of his biggest traits, is not a good sign imo.

I think Ive said it in another thread but Ben really had the look and acting chops for the character but I really feel like they missed their chance.

I don’t get why people have such a problem with Affleck’s Batman. I mean, they complain that he’s too dark and brooding and that Batman shouldn’t kill… thing is, though, Batman has been dark and brooding and willing to resort to lethal force in almost EVERY SINGLE ONE of his live-action appearances. Don’t get me wrong, you are definitely entitled to that opinion, but I just don’t get how some people can hate this Batman for doing stuff that they had no problem with other Batmans doing (and yes, it is “Batmans,” not “Batmen.” Proper plurals take singular construction.)

Also, while the Nolan movies were very well-made, I always felt that they took themselves a bit too seriously, sacrificing the things that made Batman stories fun for the sake of “realism.”

(As an aside, while Ledger did well, my favorite Joker will ALWAYS be Mark Hamill.)

@MajorZuma, I actually don’t think your criticisms are unjustified, considering I feel the same way haha.

You’ll always get people who will respond to that with “Yeah but here’s twelve examples of Batman killing people in the 40’s” or “Bale’s Batman kills plenty of people indirectly”. Bale Batman tip-toed the line just enough to not bother me. Despite doing things that placed others in situations where they’d likely die, the character repeatedly stated that he will not use guns, and he will not take a life. SNYDER on the other hand makes “realistic” versions of characters, and insists that real versions of Superman and Batman would kill. But while that may be true, those aren’t traits that we like about Clark Kent and Bruce Wayne. One of the things I actually like most about those characters in modern comic books is their no-kill code.

I also feel like you aren’t allowed to get angry at the fan base you were supposed to be making movies for. A lot of people (like myself) weren’t a fan of his Batman and Superman resorting to killing. Since I was a child, those characters would tell you there’s always another way. Always. That’s what those characters have evolved into. And when fans complained about it, Zack’s instinct was to get mad at them and basically tell them they’re wrong. I’m sorry Mr. Snyder, but you made Superman and Batman movies that Superman and Batman FANS didn’t like, and you told them they were WRONG? Maybe you just made bad movies, dude.