DCUI: What Do You Like About DC Universe Infinite? And What Would You Change?

Encylopedia
Seems to be in

Who’s Who
Toward middle

Would have liked a visual change to the main page indicating we were now DC Universe Infinite. I had to look for Hellblazer to confirm the switch was active. When you said no change in service you meant it.

With so many titles available we need more options to search by.

Please add a search by year function so we can then sort by date and create lists from that. I would like to replicate a trip into a comic shop. I walk in a month and every title released that month/year appears ready to sort by title.

This is already an option to sort by publish date / Date Range. See below 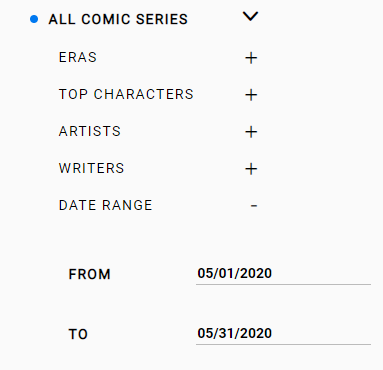 This is also possible on the app if you click Comics → Filters → Date Range.

Is this what you were suggesting, or was it something more in depth?

I usually use the app for iPad. it offers the option to sort by era, but not by date range.

that date range option is exactly what I need. on the app. think it could be replicated there?

It’s definitely in place on the Android app. Have you updated to the new DCU Infinite app on your iPad? If so, I’ll definitely make the request for the Date Range feature to be added to the iOS app too!

The date range only shows new titles for that date range

No superman batman etc even though titles published during that time

Hmm… That seems odd. Do you have a screenshot example for this? We can report that as an error.

just updated the iPad version of the app. There is no option to sort by a finite date range. When I try to filter by era it still included titles clearly not included in the era. I hoped this would be a fix. Poo

I’ll make the report for you, thank you!

I’ve identified a pretty major error/problem with my custom comic lists on the Android app. I have hundreds of lists that I’ve carefully put together, ordered either by issue # or chronological publication date if containing multiple series. However, all of my lists are now displaying in reverse chronological order, i.e. the last issue of a series is at the top of the list, and the first issue is all the way at the bottom. For example, I made a new list for the newly added “Harleen” series just this morning, after the changeover, and it’s displaying as issue #3 → #2 → #1. The only list sorting options available are “Latest Created” and “A-Z”, so there is no way to fix this on the user’s end. (Well, no way other than having to reconstruct my hundreds of lists containing thousands of issues in backwards order.) Please help! Thanks.

edit: Screenshot of what I’m talking about, using my “Harleen” list:

.) All of my lists are now displaying like this, some with hundreds of issues on them. So you can imagine the problem.

Do you have anything that would sort all of the books by date/month and not just within titles? If not, could you provide something like this? It could be called something like Comic Shop Mode in order to replicate the experience of walking into a comic shop and seeing all of that month’s titles displayed on the shelf. This would be of tremendous value and make your service much more accessible, particularly to older readers trying to catch up.

I read on a chromebook in portrait mode, or at least I did on the old app. When I updated and flipped into portrait/tablet mode the window stayed in landscape. It would be nice to get this working again as I do prefer to read my comics at roughly the size of a physical copy if I can. I dug through the settings and didn’t see anything that would control this feature. Am I missing a check box or button or something?

Hi! We’re not able to recreate this on our end. Can you please try uninstalling and reinstalling the app on your device?

I just had to restart the app. for whatever reason opening it just after updating had it stuck. back to reading.

The only difference was, my lists were set to “A-Z” by default. When I switched it to “Last Created”, it went back to the reverse chronological order.

Can you please reach out to Customer Support regarding this? Make sure you are including your device details so they can better assist you. You can reach them here.

Additionally, since this is being addressed here and with the CS team, I am going to remove your post in the other thread. Just so we try to keep everything tidy.

Thanks. I have reached out to them.

I am curious if anyone else here on Android is experiencing this with their lists, or if it’s just me.

I’m curious too, I know we’ve checked on our Android devices here and we were not having the same issue. I hope Customer Support is able to help you out!