Great day in the mornin’, welcome back for another week of action packed adventure within the amazing world of Superman!

This week, in honor of the release of Jimmy Olsen #1 (by writer extraordinaire Matt Fraction), the spotlight turns to the Daily Planet’s most famous photojournalist, James Bartholomew Olsen, better known as Jimmy Olsen aka the guy that says “Right chief!” immediately after being told “Don’t call me chief!” by a certain famous editor-in-chief of a great metropolitan newspaper.

Here’s what on tap:

-Legends of the DC Universe #14

The Superman’s Pal, Jimmy Olsen series marked the return of Jack “The King” Kirby to the hallowed halls of DC Comics and the beginning of his highly regarded (and for good reason) Fourth World saga.

Kirby’s tenure on the series would see the introduction of Darkseid as well as (and mong others) the helpful telepathic alien Dubbilex, a modern take on The Newsboy Legion (which debuted in 1942 and was co-created by Kirby and comic legend Joe Simon) as well as a modern revamp of The Guardian, also a Simon/Kirby creation from 1942.

Bonus Question: Have you read this week’s Jimmy Olsen #1 yet? If so, what’d you think of it?

This discussion runs from today, July 19th to next Friday July 26th, and spoilers are absolutely welcome.

Slap on your official Superman signal watch, grab your Nikon camera and hope into the fun world of Superman’s pal, Jimmy Olsen! 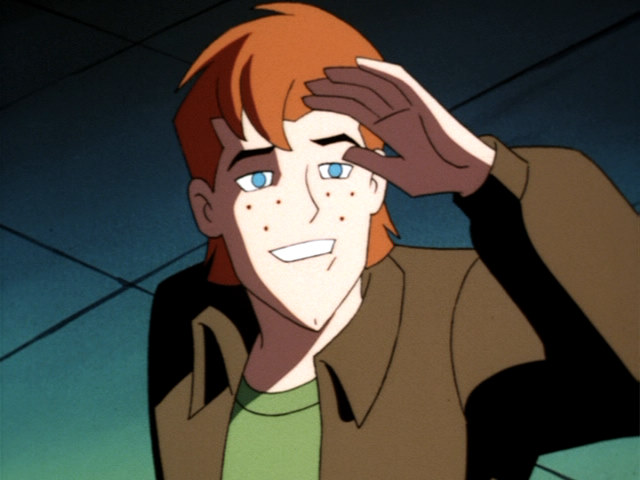 I love the Mountain scenery in that picture!

Cool! Not only is it nice to finally read some more Jimmy focused stories, this is a good way to get started on actually going through all the Kirby run of New Gods, since as I recall this is the first part to that run.

@Jay_Kay Kirby’s Jimmy Olsen is so much fun. There’s some interesting experimental stuff going on it. Legendary comedian Don Rickles even guest starred! Kirby definitely had the goods.

@Vroom, LOL the thumb nail doesn’t show up on my Chromebook I just see one of those blank images with the little mountains and a moon or sun. I just jumped on my phone though and can see its jimmy O. (looking at Mountains I’m gonna say)

Jimmy’s just happy I put the spotlight on him. He deserves it.

Right! that little bit he had in leviathan was hilarious. was that gypsy like from The Flash show?

First finished last week’s homework a few days late it was awesome, do I get partial credit?
I had started this, but got sidetracked. This is a good excuse to get back into Kirby meets Jimmy.

@msgtv You absolutely get credit, as well as a thank you from me, so… thank you

I have some Schrute Bucks too if you want them. Some guy that sounds like Lex Luthor gave them to me in line at the grocery store.

I also accept Stanley Nickles. First two issues where far out cats. But, it seemed like Kirby was trying to figure out how to draw Superman. He’s pretty inconsistent throughout. With Kirby, even Jimmy taking over some biker gang turns into a crazy trip.

@msgtv What a fun trip it is!

I do agree that Kirby’s Superman was a bit rough at first, but he gradually got the hang of him.

I love all of the crazy environs, tech and vehicles Kirby created here. His towering imagination was on full display in this series.

Holy smokes. Someone’s bred a giant renegade Jimmy Olsen’s!
Now we know it took Kirby all of two issues to figure out how to draw Superman. Looks powerful. Of course the writing continues bonkers with giant and mini clones. Seems Kirby figured out how to get Superman and the Hulk to fight. And shouldn’t Flippa Dippa’s dad get him professional help? Wearing scuba gear 24/7 is a cry for help.

Speaking of Kirby taking a while to get Superman right – DC constantly re-edited his Superman in the printing process. Specifically, they didn’t like how he drew Superman’s face and would have more standard Superman artists of the time like Al Plastino. This, understandably, peeved Kirby off completely. Here’s a good side-by-side comparison. 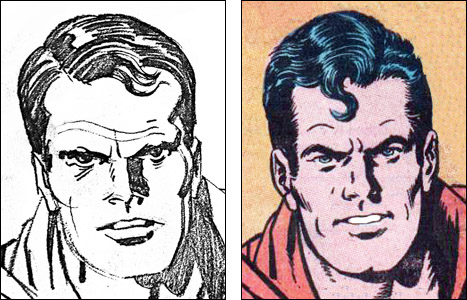 “Hey, da Vinci, that goirl sure looks good. Dat smile needs help though. Let’s me fix dat.”
And his version is cool, very much Superman but more solid in a Kirby style.

@Jay_Kay, wow I am guessing that the one on the left is Kirby’s. He looks like he could be Orin almost.

@msgtv Like I said, fun. I loved Flippa Dippa, but you are right in that he’s just a scosh too into scuba gear

@Jay_Kay DC did indeed fiddle with Kirby’s art on occassion, especially since they were in New York and he was in California. What could Kirby do but accept it?

Early on, art changes weren’t entirely unwarranted due to some rough artwork, but by the third issue forward Kirby clearly got the hang of things.

Yeah, if I were perfectly honest, I like the altered version better, but it’s still kind of a sucky way to do it. I mean, they advertise it as Kirby being fully unleashed on the DCU, they could have at least asked him to work on making the face a little more classically handsome – or at least get his hair part and the s-curl right!

@Jay_Kay Agreed. Kirby’s Superman was pretty solid in this series, however when he illustrated him for Super Powers in 1984 , it seemed to regress back to the blocky form.

Years ago, the SP Superman is typically what came to mind when I thought of Kirby drawing him. Then I read Jimmy Olsen and that changed things.

Super Powers was as close to drawing the Justice League of America series as Kirby would get. It’s a ridiculously fun series, as are it’s sequels (the third SP wasn’t drawn by Kirby, but Carmine Infantino, a legend in his own right).

Finished the arc. While it’s not the genius of Kirby’s Mister Miracle, this is still a interesting fun read. I particularly want to see where he goes with the Guardian. Not much left of this title on here so will have to read on and see how Don Rickles fits in with Darkseid.
-Hey, badly, you sure wearing a purple dress is a good idea with those legs? What are you,an alien tree stump?

@msgtv Don Rickles going at it with Darkseid would be a hoot.

I can hear him say “Darkseid huh? Like the underside of my shoe, which I’m going to jam up your @$$ if you don’t leave Earth alone! Beat it, ya hockey puck! Oh yeah, nice boots!”

Mister Miracle is my favorite Kirby character, but his work on Jimmy Olsen is pretty, pretty nifty too.