Thanks for stopping by for week 51!

Someone or something is attacking anyone who’s ever been a Titan. There’s only one way for the Titans to fight this threat: Together.

Our spoiler discussion begins now and ends at the end of the day on Sunday, September 8th. So jump right in and share your thoughts!

As always, we’d love to hear your candid thoughts and reactions to the story.

Questions, Comments, Concerns? Feel free to reach out to me, JLWWSM, on Discord or via email at JLonDCU@gmail.com. 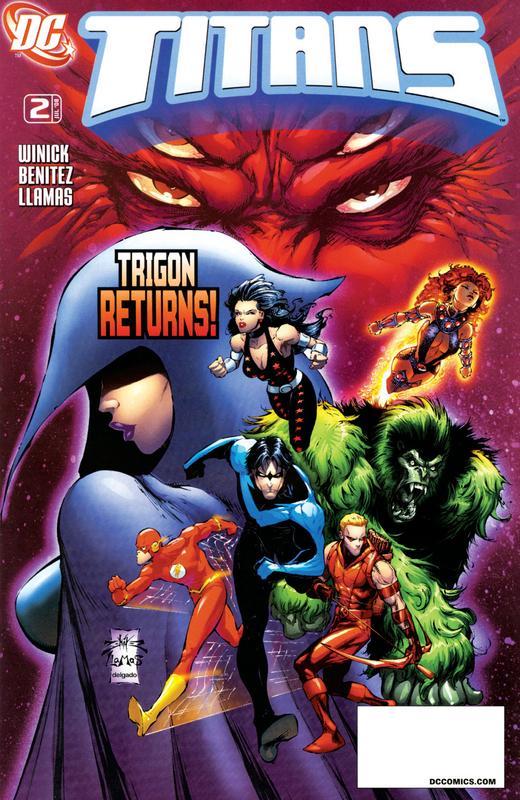 Cool selection, looks like a good mood setter for season 2 of Titans.

Getting into this, I noticed something odd-- the first issue says that its actually part two of this arc. I think the first part to this story is the Titans East Special from the same creative team.

It certainly is the lead in, Ollie

And it’s a horrible lead in what a terrible sad little story of death and destruction. Tsk, Mr. Winnick, Tsk!

But the actual selection for this week does look a little more upbeat!

@Jay_Kay
Good catch. Thanks for connecting the dots for us! In this selection, issues 1-4 are understandable without the preceding story. Feel free to jump in at #1.

@Don-El
I laughed a lot in these four issues. Beast Boy cracked me up.

For completionist’s sake, I went and read the Titans East book first, and damn, you were not kidding about the death and destruction, @Don_El. I mean, I can’t say that I was bummed that a lot of these characters bit it (I mean, Little Barda? Really?), but yeah, definitely not the best thing I’ve read from Winick.

@MisfitH
The last page made me cheer out loud

Thanks for reading along and sharing your thoughts!

Is this run just the 12 issues? i noticed a change in art or art style from issue 1 to 2. i should prob’ly stop typing and just look at the f-bombing credits…

Looking at thread that ranks Titans, I missed a lot of them

Seeing Them all together

All the butt shots

Roy, Gar, Rachel, and Victor are part of my New Justice team I play around with in Fan Fiction. (Earth 2 Power Girl and Huntress, Jessica Cruz, Jonn Jonzz and Metamorpho, last of the super heroes)

Of them, I like a competent Roy. Especially in Justice League and Young Justice season 1 as Red Arrow. He’s snarky here but okay.

This particularly Titans book runs 23 issues, the Titans East special, and 3 issue of Titans Blackest Night. Then it becomes Titans - Villains for Hire with #24.

@AntLeon
Hi - It counts! I was surprised by that too. The Trigon feebleness also stunned me. I felt relieved by the multiple children twist because it explained why they were all acting out of character (well, maybe not Dick and Starfire

). Thanks for reading and sharing!

@TurokSonofStone1950
Hi! Yeah, this run had some butt shots and moments.

Poor Roy - Lian is a handful (putting a waffle in Roy’s DVD player and then blaming it on her stuffed animal). Ha!

Thanks for reading and sharing your insights 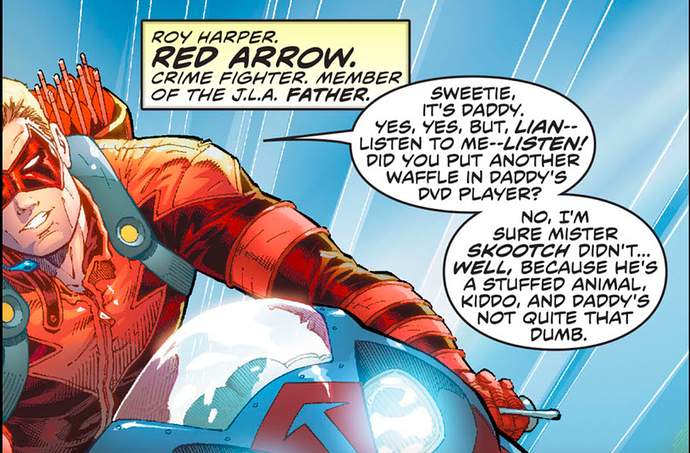 The that you want book

Nice! I’d been contemplating a re-read of these initial issues.

DQ #1. I read these issues of Titans as they came out. I don’t remember much of them though, other than the art being pretty rad.

I’ll answer the other Q’s after I’m done reading.

This volume of Titans was pretty good overall. When it switched to a villain-centric book as part of Brightest Day in 2010 is when it slipped in quality a smidge. Before that though, I remember it being a solid series.

Looks like fun! Can’t wait for Titans to return!

Picking up from where I left off in the DQs:

I loved Ian Churchill’s art in issue 1 as well as that of Joe Benitez in the subsequent issues. I adore Churchill and have been an admirer of Benitez’s since his Wraithborn series from Wildstorm came out in trade.

A wonderfully enjoyable read! I devoured each issue with greater veracity than the last. Judd Winick’s writing was on point (Titans marks at least the second time his work has been featured in the main Book Club) and aside from a few awkwardly drawn faces in #'s 2-4, the artwork was great too.

This re-read of the initial issues of this volume of Titans was so fun, I’m now re-reading The Methusalah Imperative, which was the final story of the series. Call it a compare and contrast from where the series began to where it would end.