What better way to spend our 30th Week then with the Main Man himself LOBO!

This week we are checking out the Lobo mini series from 1990. Written by Alan Grant and Keith Giffen with art from Simon Bisley.

Spoiler Discussion begins NOW and wraps up on Sunday (4/14)! So make sure you let us know what you thought of this week’s selection!

What was your first interaction with the character Lobo?

How did you feel about this book only being 4 issues? Too short?

Lastly, throughout the book we got several looks throughout Lobo’s early years, which one stood out to you?

COMING UP NEXT WEEK: DCUBC Girl Power Returns! WOOHOO! See ya fraggin’ then! 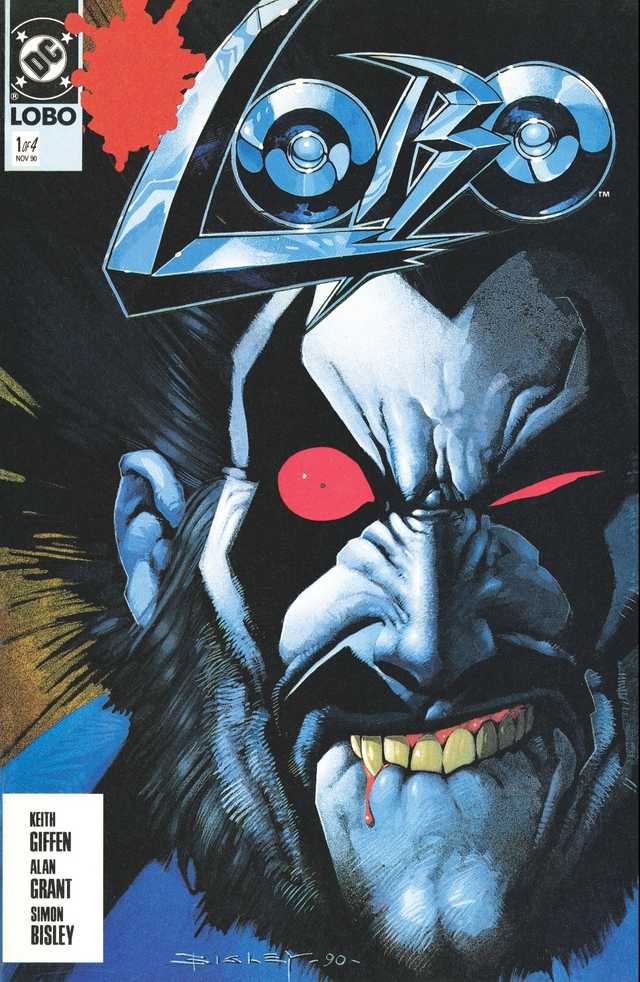 Feetal’s Gizz, it is time! grabs his chain and rusty hook, revs up his gnarly spacehog with his left hand and does “the horns” with his right Hoohaw! Let’s ride baby!!!

Discussion Point #1: First time I experienced Lobo…I think it was in an issue of Comics Scene magazine when I was eight or nine. I’d never heard of him but I saw pictures of him in that mag and thought “Geez, he looks mean.”

When Superman: The Animated Series debuted, I recognized Lobo in the show’s opening as “that guy from Comics Scene”. My first substantial experience of The Main Man came, fittingly, from the episode “The Main Man”. It’s one of my favorite anythings from the DCAU. Brad Garrett (Robert from Everybody Loves Raymond) played Lobo to perfection

Sweet. What a fun excuse to read some Lobo. Not very familiar with him overall. What are some other great Lobo stories?

Other Lobo titles that are packed with mischief:

-Lobo’s Back: the second Lobo mini-series, this one being from 1992. It’s weird and out there, but if you’re interested in Lobo, you’ll probably enjoy it.

-The Lobo Convention Special. The Main Maimer more or less gives the bird to fanboy culture (and this was pre-internet). It’s a hoot if you’re aware of what he’s satirizing and even if you’re not, it should still provide some semblance of comedic value.

-Lobo volume one. His first ongoing series and arguably the best. It ran from 1993-1999. On the cover of #1, The Last Czarnian proudly proclaims that’s he’s got your cover enhancement (for the issue debuted during the comic boom of the 90’s) “right here!”. I’ll leave it to you to discover where “right here” is =)

@Don-El The Main Man is indeed a tasty treat. So sayeth the Ragglesnarx that tried to eat him. Now the 'snarx is Dog’s latest blanket. Haw haw to that toothy bastitch!

Ah. The Main Man and, coincidentally my DCU avatar. Gonna be a fun read.

@LonelyLobo Your avatar is from Lobo Unbound, right?

I’ve seen you around and was wondering if you’d stop by!

This is a great place to start! He also makes an appearance in American Alien (which is a personal favorite of mine)

I’m really excited to read this. I’ve only read one Lobo story (it think it was a holiday themed one, but I can’t remember). This looks awesome!

Sigh, I’m really messing up a lot with typos today!

“What was your first interaction with the character Lobo?”

Like others have said, my first interaction with Lobo was in Superman: The Animated Series, and I thought he was okay, but because of that, I kind of got the feeling that I would just not care for him as a solo character. You know how people will always talk about how annoying Deadpool is over in Marvel? Lobo is ten times worse. He’s good as a side character, a good foil for characters like Superman and the Justice League, I’m sure he’ll be great on that front in Krypton, but I felt like he would get old extremely quickly in his own solo story.

Reading this book changed my mind…slightly. I figured I’d just read the first issue and be done for the night, but I tore through all four issues within a single sit down. I still can’t fathom how this character had an ongoing book for SIXTY-FOUR freaking issues, but mini-series and one-offs, short bursts of the character can be entertaining. For me, I think a big part of it was Simon Bisley’s art, which is crude and ugly in all the best ways.

My favorite was probably the whole ballet of death sequence, taking something that this epitome of crass, uncultured, machismo swine would find stupid and mixing it with the blood and guts of what makes him entertaining does make for some great art.

“How did you feel about this book only being 4 issues? Too short?”

I’m kind of struggling with that. On one hand, part of me wishes that the plots of all these outside forces – the oafish space truckers, the literal snake-like corrupt cops, the snobbish little old ladies, and the young and dumb fanboys – all met up with Lobo and got handled by him; though there’s definitely a great cosmic irony that all these forces after him destroy each other and he gets away with barely a scratch.

On the other, I feel like there really wasn’t much story here for there to be four issues, but rather each issue the writers would set up a hook, then tell Bisley to go nuts, and he would deliver.

“Lastly, throughout the book, we got several looks throughout Lobo’s early years, which one stood out to you?”

I liked the sections of the book his old grade school did – the writing was absolutely purple and atrocious, but I’m pretty sure that’s by design. Overall I do like when comics break from the traditional form, so seeing those bits were pretty fun in general.

So overall…it was entertaining, I feel mostly because of the art. It was a fine four issues, and that’s probably enough of Lobo for me for a good long while.

I enjoyed Lobo in the L.EGI.O.N and R.E.B.E.L.S books as part of a greater space team.

Here’s the secret about this Lobo series, which I heard from Keith Giffen himself: it was never actually meant to be a miniseries. Giffen agreed to write a Lobo book for DC on the condition that the first time they tried to censor him, he was out.

When he submitted the script for the 4th issue, they told him that he wasn’t allowed to have Lobo fight Jesus. So that was it!