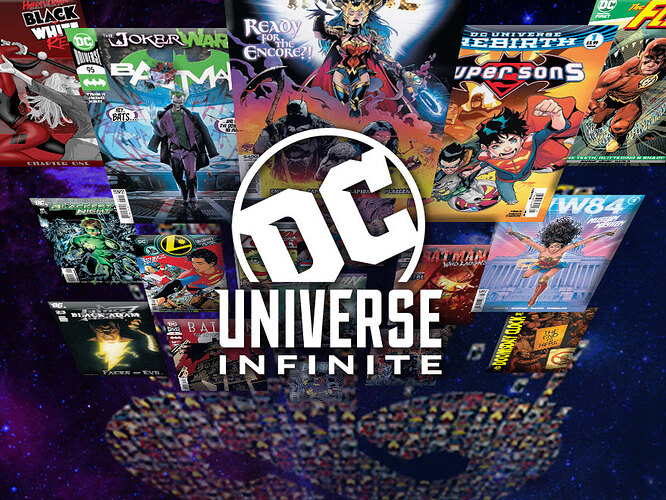 Hello everybody, At first I was going to make this a poll, then decide against that. It’s been one month today since DC Universe Infinite has started. So what you guys think of it?
In my point of view I think it’s doing very well, beside some glitches, long loading, and reading comics, Alfred kept rudely interupt when I want to read.
But I can tell the Moderators are working hard to make sure everything run smoothly, and I think they’re doing a great job.
Each week I always look forward to seeing the new comics being added, I was so thrill that they added Earth One series last month. According to Applejack no comic will be leaving and that’s really a great news. Say you wanted to read Batman: No Man’s Land, and there’s 88 comics in the series, you can take all the time you want to read each book without worrying about losing a issue.
While there’s missing comics in some of the series and hope to see them on here, be sure to let the Moderators know and they’ll happily add it to the list.
Last but not least, I also enjoy getting the news from The Watchtower. There’s 4 comics I’m looking forward to reading this year.
Future Stats
Stargirl Summer Vacation
Superman78
Batman89

As for Videos with some of the shows on HBO Max, I can tell they are really trying hard to make their DC section better. And it has. I also enjoy watching movies on there outside of DC, $14.99 a month is a bit of alot, but it’s worth it.
I’m looking forward to see what movies or shows will come in March.

If I have to grade it, I would give DC Universe Infinite, plus HBO Max 4 out of 5 stars.

Hope everybody is enjoying DC Universe Infinite as much as I have.

I have been reading comics like crazy lately. Very much enjoying them.

I was looking forward to it, but also not sure what to expect. I was very happy with the layout. I like this lighter look. Yes, I know you can switch it to dark mode, and I might if I’m feeling nostalgic.

I’m still reading the comics and have even gotten into the digital series, especially the Superman one written by Vendetti. It’s excellent! I hope during the year the rest of House of Secrets and House of Mystery gets digitized. I would love to continue reading those.

I can’t wait to see what they have in store for us this year.

I haven’t been reading comics that much since I have been busy with work and school, but I have a great experience with DCUI so far. $14.99 a month for HBO Max is expensive for me, so I am planning to reactivate my subscription when the movies/shows I want are added.

Unfortunately my work has been keeping me a bit busy, so I haven’t been reading as many comics as I would like. That said, I’ve been loving DCUI.

I do still miss some things from the DCU days, mainly the ability to open the community page without opening a whole other tab on my browser, but the comic selection is great, and I hope other folks have also been sticking with the service.

On Max being expensive, I think they might be still doing a deal where if you have DCU, you can get Max for five dollars. It might have expired already, but I’m not sure.

Worthless now that you’ve shifted to HBO max for your shows, I liked that you had everything I wanted in one place for a reasonable price. Now your media is scattered to the winds again and every one wants a premium price. Very disappointed that you abandoned the kind of platform comic fans were seeking. Canceled and will not resume subscription or subscribe to HBO max.

Understandable, I respect your opinion.

I hope we get more Elseworlds as well; possibly some of the annuals, as there were some amazing stories in there.

I like that DCUI is focused completely on comics now, because I know that DC is finally taking digital seriously.
However, the bitter part of this bittersweet deal for me is that the archive issues are reportedly being limited to five a week
Which isn’t bad if that’s all that was being digitized by DC, but there was this case with an issue of Catwoman a couple weeks ago.
So, I guess we’ll see.

I have been a member for one week. So far, I am really enjoying it! The selection is solid, and growing, and the comic reader works well.

I guess I would have to say that I was pretty disappointed with the rollout of DC Universe Infinite. I’d like to make it clear that I’m not disappointed with the DC Universe Infinite service as a whole; I’m never going to cry about 25,000 comics (we’re certainly spoiled in that regard), the comic reader works well enough, and I love the community (it’s honestly the best part of the service). And the removal of the movies and TV shows didn’t bother me too much: the announcement was made far enough in advance that I had plenty of time to watch what I wanted to watch, and most of that stuff has now been added to HBO Max anyway (with the one major exception I can think of being Superman: The Animated Series, which will hopefully be coming soon). No, what disappointed me about the rollout were a) the new Android app, and b) the new comic additions:

All that really needed to be done to the app to prepare it for the transition to DCUI was to remove the movie/TV and community sections, give it a fresh coat of paint, and change the name. Instead, what we got was a buggy mess that was somehow much worse than the version that immediately preceded it. I wasn’t expecting any major upgrades to the app, but I certainly wasn’t expecting it to be made worse. It gave the distinct impression that the app was rushed out to meet the January 21st deadline without it fully being tested, which is never a great impression to give. Among many other bugs, problems and annoyances, the most egregious one is that the user-created comic issue lists somehow ended up in reverse order from how they were created. Meaning that, assuming you’ve added the issues to your lists in chronological order, they are now backwards, putting the final issues of a series/storyline at the top of the list, and the first issues at the bottom, with no way to re-sort them. We now either have to re-create all of our lists in backwards order, or else scroll all the way to the bottom of them to read through them. It’s now been a month and this error has yet to be corrected. Applejack has assured us in Office Hours that the first major update to the app is coming soon, though, and I certainly hope that a correction to this problem will be among the updates. But this and the other problems with the app left a bad taste in my mouth, and gave me a bad first impression of DC Universe Infinite right out of the gate, bad feelings that I did not have about DC Universe Classic.

While I am certainly grateful to DC for adding all of the comics that they did, what we actually ended up getting was nowhere near what was promised in the pre-launch marketing. There was a lot of hype about Vertigo, Black Label and graphic novels coming to the service, but when the Every Title Launching on DC Universe Infinite on January 21st, 2021 thread dropped, the reality sadly didn’t live up to the hype. Some of the biggest and most important Vertigo series were missing, like The Sandman, Y: The Last Man, and (inexplicably since we used to have it on here) Grant Morrison’s Animal Man; “graphic novels” pretty much only extended to the “Earth One” series, and even then, only to the first books in those series; and, most disappointingly (for me), only a handful of the Black Label titles: among others, no “White Knight” beyond the first series, no “Last Knight on Earth”, no “Joker: Killer Smile”, and it looks like we’re not going to be getting “Three Jokers”, either (I believe the first issue would/should have arrived here in March, and it’s not there on the “coming soon” list). Plus, DC is still keeping essential classics like “Batman: Gotham by Gaslight”, “Batman: The Killing Joke” and “Watchmen” off of the service. There was lot of noise made about how DC is getting really committed to DC Universe Infinite, placing a lot of focus on it, and how important it is to their future plans. As far as I’m concerned, as long as these essential classic titles are being withheld from the service, and as long as so much of Black Label is missing, DC can’t possibly claim to truly be committed to DCUI 100%. There’s obviously still some reservations about the service somewhere there. The little exclusive digital-first series that we get are nice, but let’s be honest, they’re no replacement for the heavy hitters that I just mentioned. And yes, I’ve heard all of the arguments about supporting comic shops and book sales, etc., etc., but that just doesn’t hold up to scrutiny for me, especially when you can get all of those titles that I just mentioned for free (yes, free) through your local library on hoopla. I shouldn’t have to go off to some other service to get all of my comics (particularly one with a vastly inferior comic reader). DCUI should be the one-stop shop for everything DC. And I’d much rather pay DC my cold, hard-earned cash for it to be exactly that.

(There was also the case that LeonardoMyst mentioned of the missing Catwoman (1993) #24 issue a couple weeks ago, but I attribute that more to a mistake made somewhere along the line, rather than an intentional withholding. Hopefully that mistake will be corrected soon.)

So far I’ve been pretty happy with DC Universe Infinite.

A couple of minor things I’d like to see…

Of course, I want everything on the internet to have a dark mode. DCcomics.com, nytimes.com, theverge.com, everything. (Ha!)

Anyway, other than those couple of things (those couple of #firstworldproblem things), so far so go. Looking forward to any new visual and feature refreshes and updates, because I always like the “new.”

Overall though, eight out of ten, I guess, is how I would rate DCUI after one month.

I’m having a great experience with dc universe infinite, vertigo(while not all) and black label? Yes please. I look forward when they bring in future state

@Reaganfan78 nice to see your thread being featured on dccomics.com today!

What?! Wow cool, Thankyou so much for letting me know @Don-El_52!

My favorite thing about DCU was reading comic books on TV, instead of on a phone or tablet, so that’s been a pretty big drag for me. The 6 months for new comics thing is a great value for those that aren’t buying new all the DC they’d want to read, but I do buy them new, even the ones I’m on the fence about, because I really love DC. Overall I think the site is a great bargain, but for me personally, if I’d known the comics streaming option was going away, I doubt I’d have renewed for DCUI. I would and do recommend it to friends that want to get into DC though.