SPOILER discussion begins now and goes through June 15th. Let us know what you’re thinking of the comic as you read. 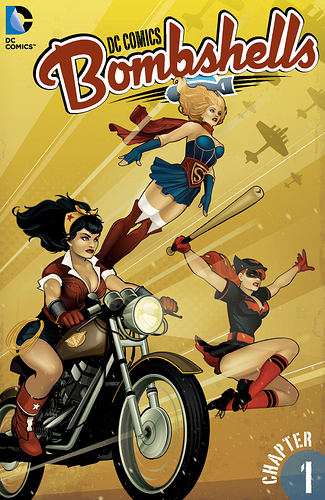 Mae!! Never read Bombshells before, but can’t go wrong with all of these awesome women

Yes indeed! It’s a wonderful series and I’ll be sure to post my thoughts later this week, after I re-read these first few issues.

Cool! I read the first three issues back when that was all that was available on here, looking forward to reading more of it.

I have had this series recommended to me so many times. I may not get to responding before you get to the next group, but I am definitely reading these and commenting. I am loving the choices so far! Can’t wait to see what is coming down the pipeline.

@PrincessAmethyst – I know I’ve went and commented on book club entries well after the fact when I finally finished one, I’m sure no one would mind if you did the same.

@PrincessAmethyst No pressure. I understand, friend

We’ll still be happy to read your thoughts when you post them.

Nifty! I’ve not read this series. Eager to check it out.

Hello! I read this last week. I loved the artwork in this series.

I really enjoyed Batwoman. This was one of my favorite Batwoman stories. She was my favorite character in this arc.

The twin reveal was fun (I couldn’t figure out who they were until the big reveal, and then I realized they do indeed look a lot alike)!

@Vroom Same. It’s a book I always wanted to read and figured this would be a good chance to finally do that.

@JLWWSM That’s really awesome that you just read this. Thanks for joining in.

I still haven’t gotten to the reveal, but now I’m going to be looking extra carefully at any clues

So spoilers I guess? I just read the first nine issues again, it’s a very quick and fun read. I love this book so much and was so touched when it was sent to me as part of a care package from DC Universe recently. I love that this is a mainly female team working on the book, and I especially love the art for the Batwoman chapters. It feels a little odd that different artists are doing the different chapters at first but once you realize that it’s actually cool.

And I would really love to single out the artwork by Marguerite Sauvage. It’s really stylized and has that vintage 1940s feeling. Her women are very feminine and beautiful, Kate herself is gorgeous-looking and the brief tender scenes between Kate and Maggie are cute and emotional. I wish there were more of them so that when Kate is finally enlisted, there would be an even bigger swell of feelings for Maggie as her beloved is going off to war. But even so, it was excellent.

I really enjoyed the play on the famous Crime Alley scene, the newsreel announcer, Zorro, all these little vintage things just added so much to the art and the world. Marguerite Bennett’s writing is fun and funny (I loved that Amanda Waller line later on about “unexpected and unsuspected resources” with Kate going “Women?”).

I mostly connected with Kate, and not just because she’s perhaps my favorite character, but she was just so well written and drawn. The art style is simple but not simplistic, the colors are subdued and somehow bold at the same time. It’s beautiful. I liked the art during the Supergirl and Zatanna chapters, it was good, but not as good.

The Supergirl and Stargirl chapters were quick but fun as well, it’s interesting seeing them interpreted as part of the Soviet army. Those uniforms are actually very cute and I enjoyed the Russian folktale flavor here. The Wonder Woman chapters were good as well, if going over much of the same material (very similar to the 2017 Wonder Woman movie). Teaming up with Mera was nice, and I had a big dumb smile when Mera was gently making fun of Diana for falling for Steve, who she always calls by his full name, which is pretty adorable.

The Zatanna portion was probably the shortest and I didn’t get into that as much. Zatanna’s initial performance was pretty sexy actually but then it got weird. Tenebrus is creepy… Also, Constantine as a bunny is super cute! Joker’s Daughter is… not

So overall, I think this is an excellent series. It was rightfully nominated for a GLAAD award as an Outstanding Comic Series. While Kate being a lesbian doesn’t really come out in full force here, it’s always in the background, it’s part of her character and who she is. She can be girly and tender with Maggie (that Fourth of July sequence made my heart ache), and then she can dial up her badassness and kick some serious butt when necessary. And that’s why I love Batwoman. I hope the upcoming CW show will have similar moments.

I don’t know if any of the Bombshells universe stuff can really make it into the main DC continuity, but as an Elseworlds story, it’s great. Hard to imagine it came out of a line of collectibles. With any luck, maybe we’ll even get an animated movie or a series? Maybe a DC Universe exclusive?

@Mae I’d love to see an animated Bombshells movie or series. Hey, why not both? Itworked for DC Superhero Girls.

envisions what a Lego DC Bombshells movie could be like SG have one, why not Bombshells? I’d check it out.

@Vroom, an animated Bombshells movie or series would be wonderful! I already cannot wait…

And at the risk of sounding soapboxy, I would point out that even though the term “bombshell” comes from oversexualizing women in the 1930s and 1940s, and the designs are inspired by pinups from the same period, these women all have agency and if anything this book uses the female gaze as opposed to the male gaze. As I mentioned earlier, there’s a bedroom scene with Kate and Maggie but it’s done artfully and tenderly. There are no gratuitous booty or boob images for the sake of making it sexy. Comics have always oversexualized women in this way with skimpy costumes and provocative poses, but not here. Even Zatanna’s performance, while sexy, is not sexualized. I think there’s a difference.

@Mae The art in the Batwoman chapters is my favorite too. It gives me Batgirl of Burnside vibes. I ended up liking that each story taking place in a different place had it’s own art and feel. I’m wondering how they’re going to meld the art styles when the characters come together. That’s going to be cool to see.

I really appreciated Marguerite Sauvage’s art. It also helps that her chapters did take place in America so she was able to evoke that 50’s Americana. Themyscira, Russian military, and German magic shows didn’t really allow for that kind of art choice.

The reds in Kate’s hair and costume are vibrant and deep. I really love how they colored her reds.

The Fourth of July sequence

Bombshells would work so well as an animated series here on DC Universe. It could be a more mature version of DC Super Hero Girls. Like Vroom mentioned, SHG even does movies and TV shows concurrently.

Now I’m jonesin’ for a Bombshells Lego set or two.

@nu52 I know, that sequence was so sweet, them holding hands and cuddling on the ride… Just so so lovely