Hey DC Collectors! A sidebar with @Vroom, our resident collectibles expert, on another thread inspired me to start this one.

“Look What I Just Got” thread is concerned with the present: what we’re adding to our collections right now. “DC Comics Collectibles News” takes a look at what’s coming in the future. The intention of this thread is to look back. What previously released DC items are you looking for or hoping to add? What’s missing in your collection? Could be a “grail” item, that one thing that you wish to have, or it could just be items that you know you’ll get to at some point. Figures, statues, comic books, prints, clothing, music & movies, whatever… all is fair game.

Looking forward to your shares, and hopefully some cool pictures of more DC items to hunt down! 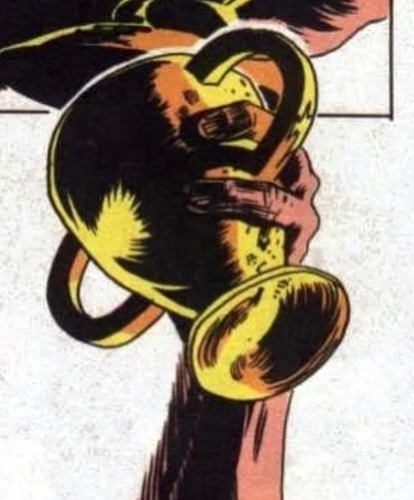 This is one of my Kenner “I’d like to get it, someday.” grails: 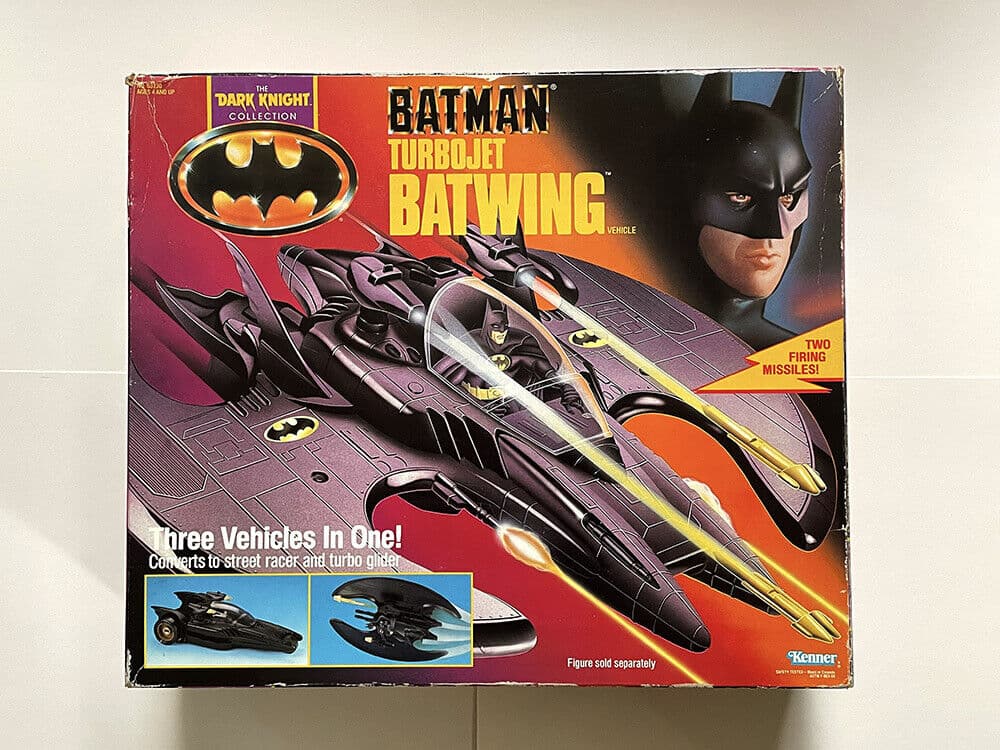 The Turbojet Batwing is always far, far outside of what I can afford to spend on it, so its been a window-shopping fixture for many years now, and likely will be for many more years.

Thank Rao for online pictures we can gawk at whenever we want, though.

Dang. Checked out sold listings on ebay and the price varies wildly, but even the low end is expensive. Nice piece! I take it holds the little Kenner 1989 Batman, yeah?

Hope you land one. The newly released Super Powers Batwing should hold you over until you do

I have quite a few pieces I would like to add, all Superman or Superman related.

This is a piece I sometimes kick myself for not taking the plunge on before it sold out. The Superman Premium Format from Sideshow is a sight to be behold. 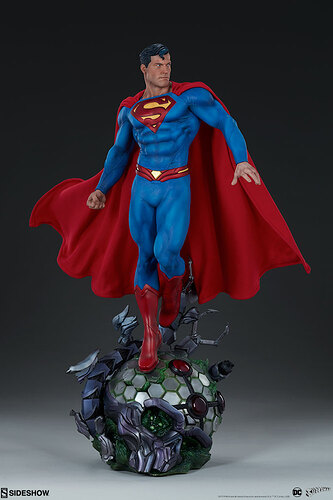 Well, there are a lot of statues out there I would really like, but my true Grail piece would be the 1940’s Wonder Woman Valentine’s Day Card. It was really the first Wonder Woman collectible piece that I am aware of. I have a repro of it which is really enough, but I hold out hope that I might run into one of these at a flea market or something (alright, not so much a hope as a pipe dream). 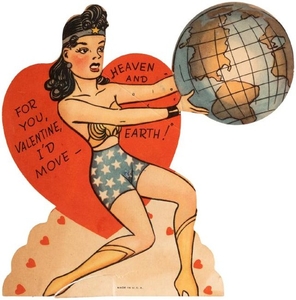 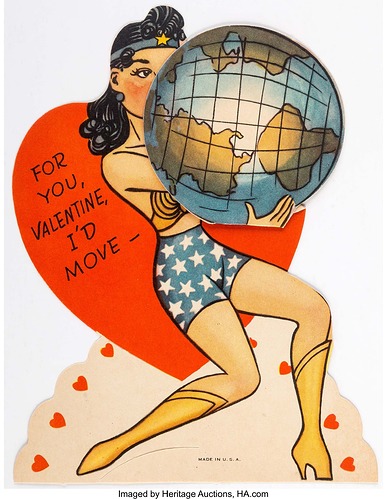 If you move your eyes quickly between the pictures it looks like she is really moving the earth!

I take it holds the little Kenner 1989 Batman, yeah? 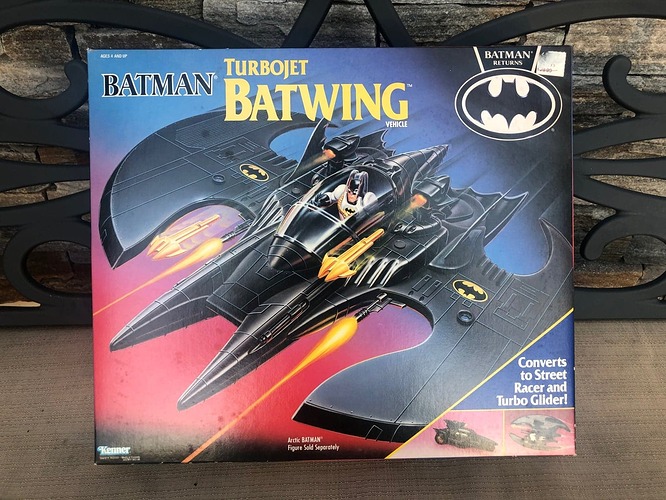 You know, I don’t think I saw the Dark Knight Collection edition of the Turbojet Batwing when it was at retail. I have a very vague memory of seeing the DKC Batmobile (which was also reissued in the Batman Returns line) at Kay-Bee, but the Batwing? I don’t think I did see it, in-store.

However, I did see the Batman Returns reissue at Walmart in 1992, and on a featured mid-aisle display.

At the time, I thought “Well, that’s dumb. That was in Batman, not Batman Returns, so why is it in the wrong box?”.

Understand, I was 9 then, so I wasn’t quite up to speed on the practicality of reissuing a vehicle from the previous movie under the banner of the current movie, even if the vehicle in question was destroyed in the previous movie.

Rao, if I could go back in time, I’d smack 9-year-old me upside the head (gently, of course) and say “Quit questioning the validity of the thing’s packaging and put it on your Christmas list, dude.”

Ah, heck. If I went back in time to 1992, I would just buy the thing at Walmart and be done with it.

Then, I’d mosey down to the Shopko that was down the street and look over their Kenner DC and Toy Biz Marvel figures, as I was wont to do in 1992.

Sweet! I can’t imagine that many of these survived intact since the 40s.

Was your repro custom made or a reissue?

Rao, if I could go back in time, I’d smack 9-year-old me upside the head (gently, of course) and say “Quit questioning the validity of the thing’s packaging and put it on your Christmas list, dude.”

Be easy on 9 year old you. I’d probably tell 9 year old me to take better care of G1 Transformers and Super Powers, but hey… we had fun, right?

Truth be told, this was the Burton Batwing I wanted when I was a kid: 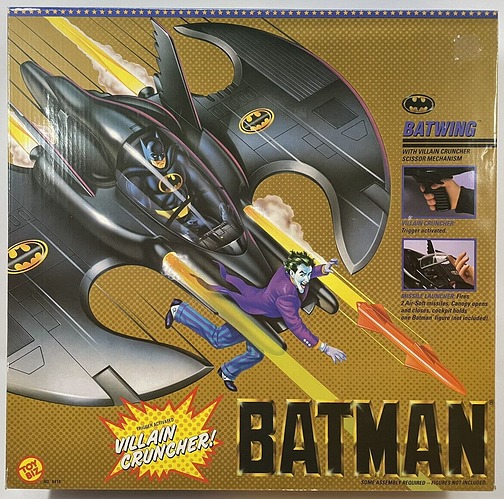 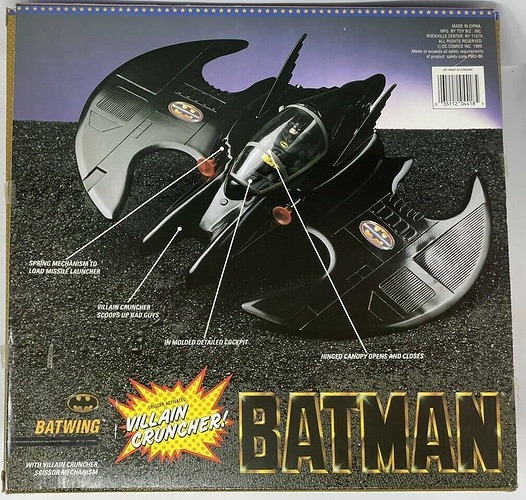 That one I did see at retail many times, but as I was 6 to 7 at that time ('89 and '90), vehicles really weren’t yet my thing, so I passed on it, along with Toy Biz’s other Burton-related vehicles.

Today, its cheaper than Kenner’s Batwing, so it has that going for it. Which is nice.

Hope you land one. The newly released Super Powers Batwing should hold you over until you do

It does! Rather…it will, as I still haven’t opened it or the Supermobile. They just look so cool in-box!

They just look so cool in-box!

When did you develop x-ray vision? Open those bad boys up and use the boxes as stands!

When did you develop x-ray vision?

This one time, at band camp, when-

Uh, better not to tell that tale.

Open those bad boys up

use the boxes as stands!

For what I have in mind for the vehicles, I’d probably put the boxes among my other saved boxes.

Albeit on top of those boxes, because Super Powers is always tops.

These aren’t grails by any means, but as an ardent fan of Mattel’s Zipline Batman figure from their 2003-2004 Batman line, I would like to get the following re-releases of him: 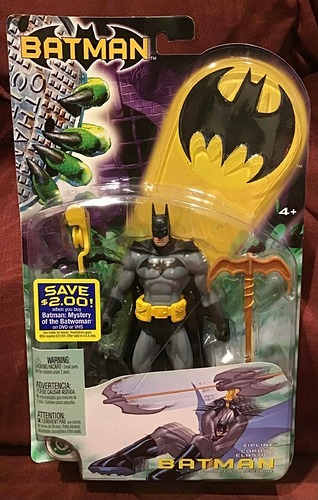 “Underworld” in this case has nothing to do with the movie of the same name. 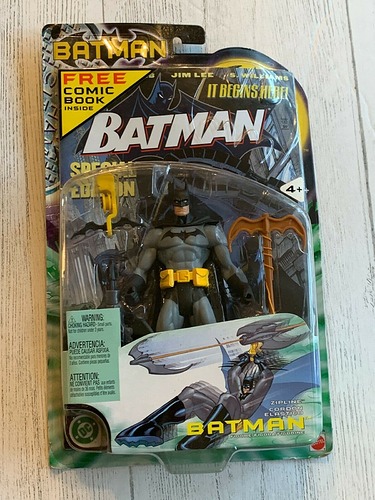 Two-pack release with Battle Board Robin 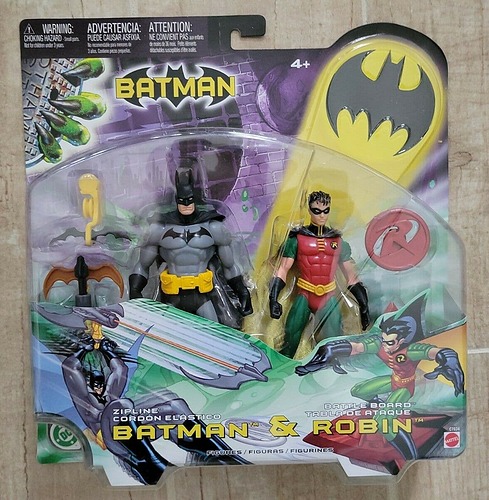 The good thing with the above is that they’re all affordable and easy to find.

Fun Fact: There’s a European edition of Zipline Batman that features different accessories than his traditional release, but I’m not interested in that iteration.

Zipline Bats. The Batman figure I should have but don’t. Why? There’s always more old Superman stuff to hunt down, as my upcoming posts will show.

If/when you get those reissues, I imagine you would keep ‘em carded?

Being the JSA ignorant that I am, whenever I read “Starman” my head immediately goes to the Jeff Bridges movie from the 80s

Here’s one I want, but unlikely to acquire. It touches on two themes from the above posts, old stuff and vehicles.

This windup “Superman Rollover Plane” from circa 1940. It rarely shows up on ebay, and when it does it usually fetches over $1,500. 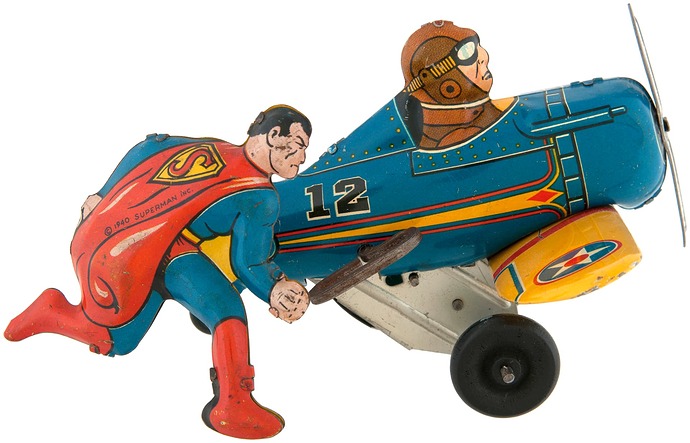 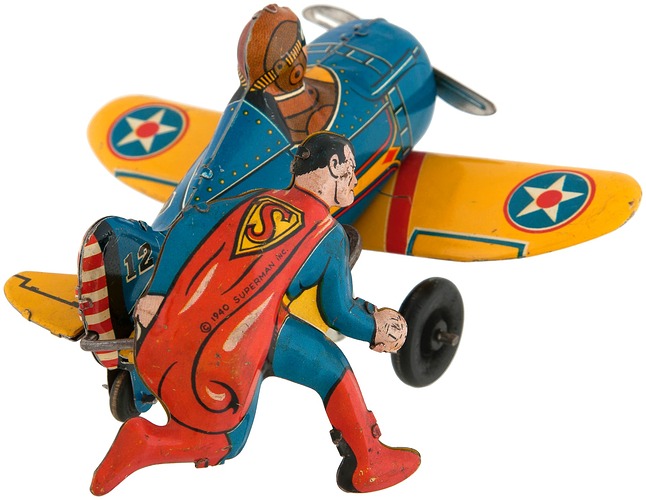 Here’s a video of it in action.

Was your repro custom made or a reissue?

It came with this book I happened to see at Barnes and Noble for $5. That book was a great find! 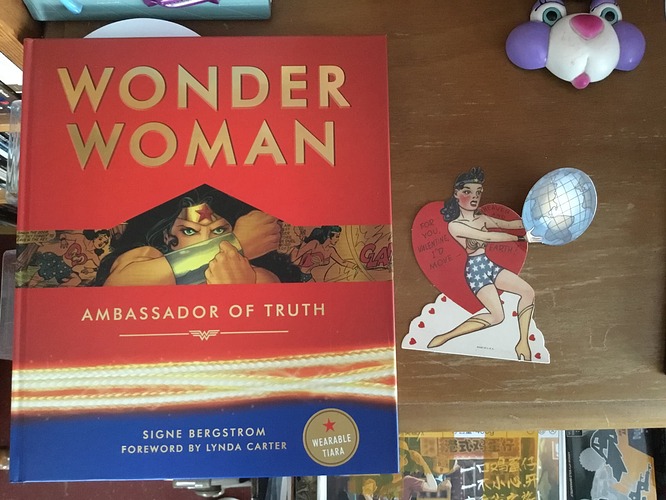 My room is so crowded with stuff I haven’t figured out what to do with the Valentine yet, so it stays safe in the book.

This windup “Superman Rollover Plane” from circa 1940. It rarely shows up on ebay, and when it does it usually fetches over $1,500.

Superman Rollover Plane looks sweet! I’ll keep an eye out for it while I’m looking for the valentine at the flea market and let you know.

’ll keep an eye out for it while I’m looking for the valentine at the flea market and let you know.

Thank you! Though if you find it at a steal, I wouldn’t blame you for flipping it

Since @Vroom turned me onto 90s Kenner, I think I have all the figures from their Man of Steel line, with these exceptions: 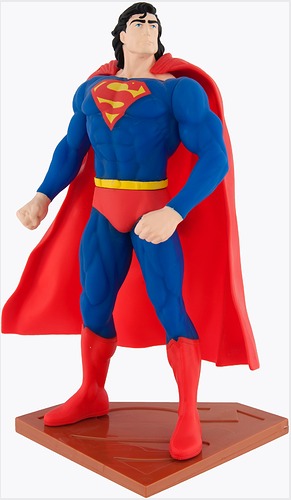 “Fully Posable” Superman (another big one) 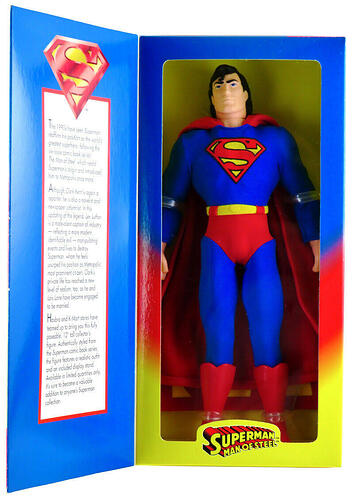 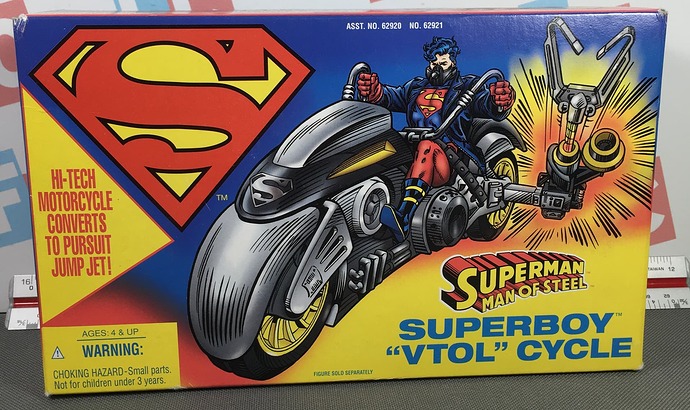 Here’s good reviews of the vehicles

All the above is easy to get at affordable prices. I’m likely adding the two large figures, but not sure about the vehicles. Maybe the coupe so I can get the Clark that comes with it, plus I like how Clark “flips” into Superman inside

I remember seeing that Clark figure in an issue of Action Figure Digest, months and months before the Coupe came out. I thought “Why does Clark have a ponytail?”

When I saw the VTOL Cycle at Toys R Us for the first time, I thought “Why does Superboy need a motorcycle? He can fly!”

The things one thinks when they’re 12.

Zipline Bats. The Batman figure I should have but don’t.

Dude, you need a Zipline Batman. When you get him, you’ll understand why, as he’s absolutely one of the Four Horsemen’s best DC figures, Batman or otherwise.

If/when you get those reissues, I imagine you would keep ‘em carded?

Yep. I have the original release opened, carded and from the direct market edition of the two-pack featuring him and Superman: 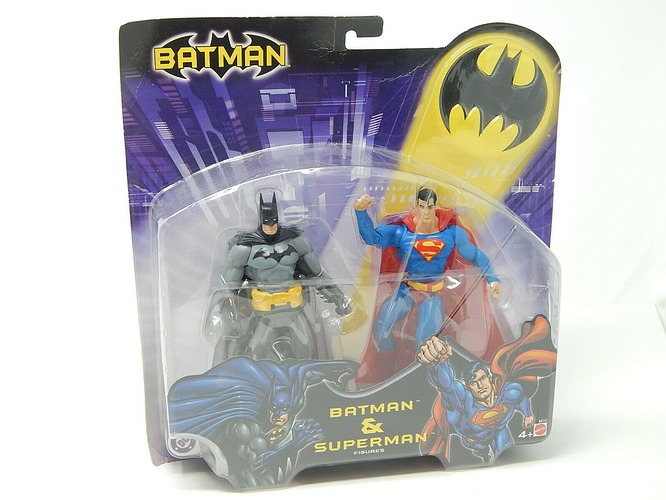 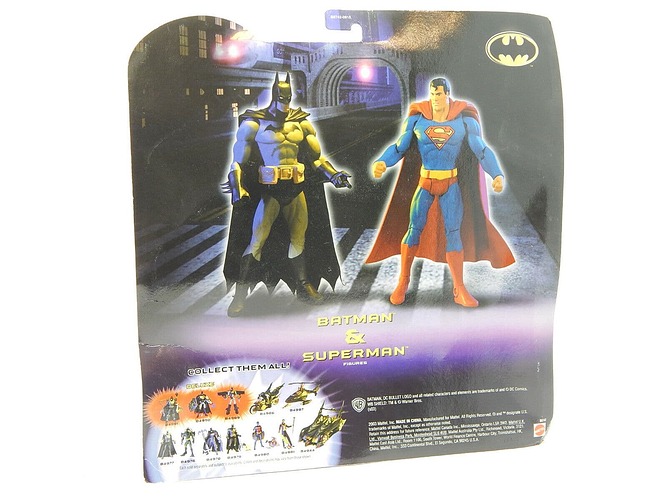 I have that two-pack opened, but if I should happen to come across a minty carded one for a good price, I’d snag a double to keep on-card.

Just for fun, here’s the mass market edition of that two-pack: 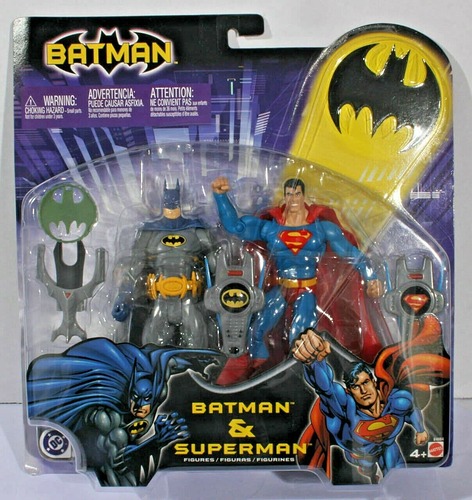 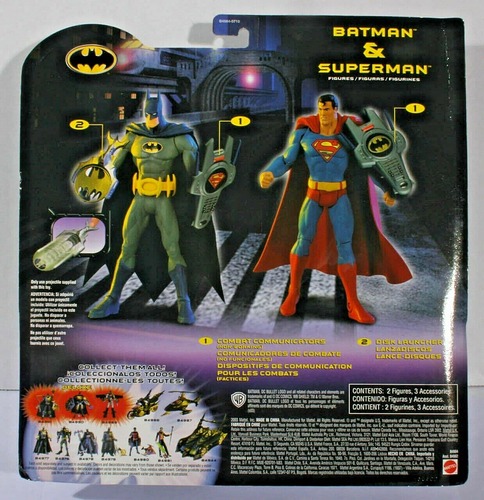 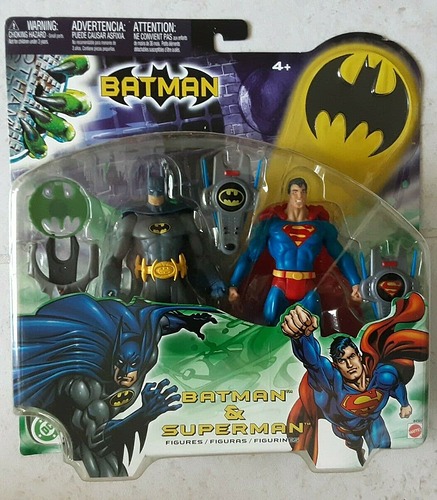 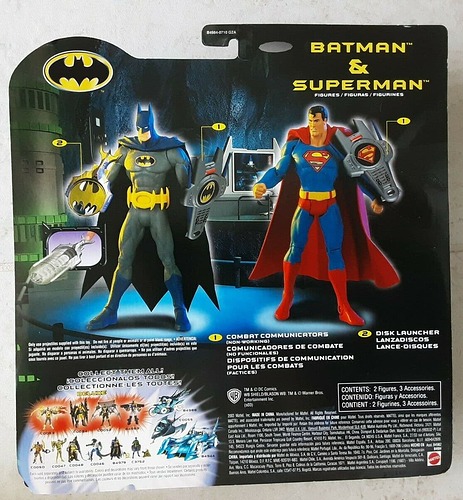 Fun Fact: The Batman in the mass market two-pack is a repaint of this figure, from series 1 of the line: 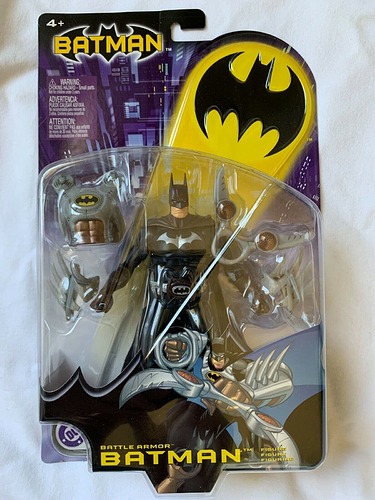 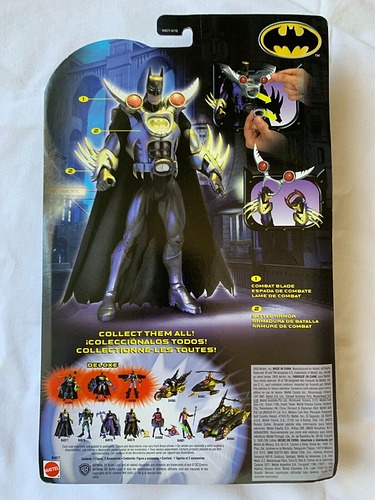 Meanwhile, the Superman figure in that set would later be reissued in the second wave (series 4, overall) of Superman-themed figures from Mattel’s DC Super Heroes line in 2006: 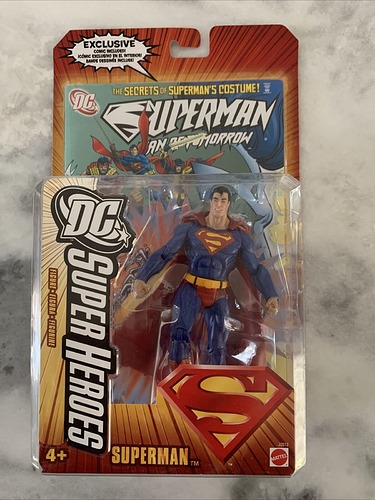 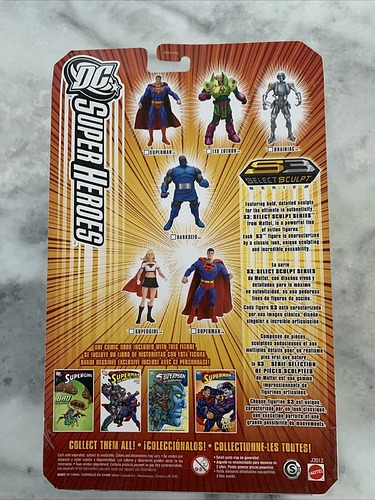 And with that, we conclude today’s class on the 6-inch scale Batman and Superman two-pack from 2003 (there was also a Justice League S&B two-pack released that year), Zipline Batman’s involvement with it and assorted notes about the item as well.