Hi @DCFanArtClub! This idea for this week’s topic started with @ImpulseMaxMercury’s Earth 3 Green Lantern poster and then continued with @MichaelLakeArt’s and @RobArt471’s Batman movie posters. Such a good idea that we can expand on now.

I see this breaking down into three options.

Number 3 was actually done by DC for a variant cover month back in 2015. Some of those covers can be seen here.

If you create something based on an old or obscure movie, don’t post the reference or give it away at first. Let us all guess!

Due Date: April 16, 2022
Discussion, works-in-progress and final submission all in the thread below.

Sounds like a great idea! Lot of freedom with this one. Glad I could contribute to the idea!

Sweet! Geez, I love the one they did for Bill and Ted’s! I about fell outta my chair when I saw it, laughing!
I have an idea for this one that may be a bit obscure. This should definitely be fun. I just gotta finish something I am working on right now.
Todd Mcfarlane threw down the gauntlet to do your own cover to one of his comics. Then he will retweet the better of them. Golden chance to have his eyeballs on my work! Giving it a shot. I will be posting it on my twitter account once finished, if anyone wants to check it out(@robholloway20). Just have the gestures down so far though.

That would be cool to have him see your work! Good luck!

Thanks for the name drop!
I enjoyed coming up with an alternate movie poster as well as my backstory on it as well.
This is right in my wheelhouse as it involves likenesses many times now what to draw? I like the idea of obscure and having people guess

Interesting challenge. A lot of possibilities. Got some fun planning to do. 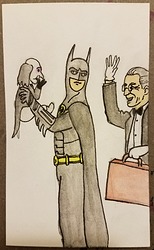 and before i fully ruined it 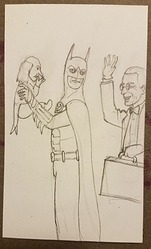 What do you mean? It looks great

especially after the coloring!

I think it is great! Mr Popper’s Penguins!!

Sweet! Geez, I love the one they did for Bill and Ted’s! I about fell outta my chair when I saw it, laughing!

Bill and Ted was fantastic. I also really like the Matrix. 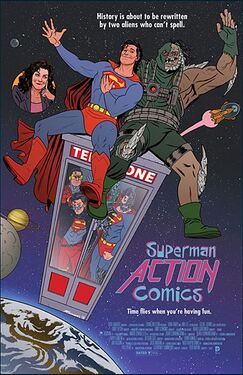 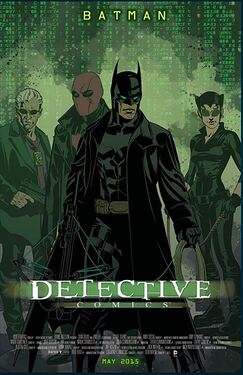 I think this looks great @biff_pow! With just a couple lines I can see the Michael Keaton likeness.

You stumped me on the reference. At first I was thinking something along the lines of Three Men and a Baby (a really creepy Penguin baby).

Question to @JKoco17 : can it be a TV poster instead of movie? I could stretch it to say it could have become a movie….

I made a poster for a television show that was an underrated favorite of mine. The cast was so likable together and it was gone too soon.
Being underrated it might be classified as obscure but my homage might give it away. 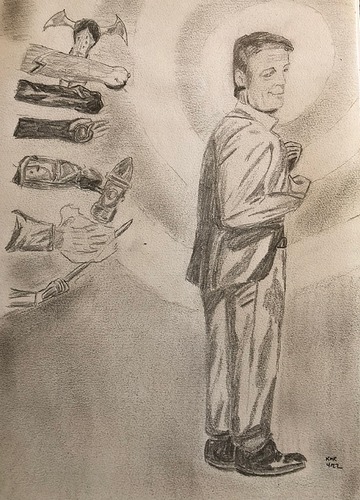 Mr Mom? It fits in well as two Michael Keaton roles. I love the drawing and I think it looks great both ways!
BTW I did guess Mr Mom before scrolling down. Love when there’s a double hidden meaning behind the drawing

Of course anything goes around here

Oh I recognize that TV show. It had two vastly different seasons. First one ended on a cliffhanger which was literally wrapped up (brushed off) in the first few minutes of season 2. Then things had a totally different vibe. There must have been some interesting behind the scenes stories on that one.

Is it The Human Target

Yes it is! I saw it years ago and know I enjoyed the buddy cop aspect of it (without cops). I should watch again. I do remember them trying something different but it may have been a way to try to avoid cancellation which happened anyways.
What did you think of my homage, utilizing other DC tv shows for the arms in the left? Can you determine who I used there? Some are trickier than others…obscurity

Hmmm some of those arms are tricky. I didn’t realize at first they were all from other shows too.

There must be some Arrowverse shows in there.

I see the batarang on top… is that Batwoman’s?

The Flash’s arm is second.

The next two I’m not sure…Is one of them Black Lightning?

The rocket hand I want to say Cyborg.

Lol!! I focused on the penguin and the businessman in the pic! Great job, again!!