DC Daily wants to know: Who would make up your Justice League Dark Roster? 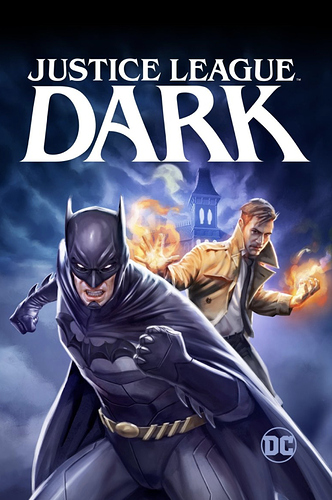 We’re going to be talking about Justice League Dark, The Animated Movie, that you can watch right here on DC Universe!

We want to know: Who would you curate on your Justice League Dark Team?

Would you pick The Phantom Stranger, Wonder Woman, Katana and Xanadu? It’s your team, you can do what you want!

Let us know before 3/11 and tune in later this month to see if your Dream Team matches ours! Looking forward to seeing your clever rosters of dark and mysterious heroes.

I would love to see Xanadu become a central kind of leadership role for the team. Like a guiding mother who is kind of a mentor to Zatanna.
Also, Etrigan is a must.
Merlin would be cool as like some sort of resurrection thing.

I think it would be cool to have a JLD that, instead of being magicians (or magic themed), was spy themed. Whenever I hear “Justice League Dark” I have to mentally remind myself they aren’t a black-ops group consisting of:

Black Bat: What black-ops team doesn’t need a ninja with a teddy-bear’s personality?

Martian Manhunter: A shape-shifting, mind-reading, detective? I’ll put one of those on my team!

Oracle: Someone has to run comms and why not pick the best?!

Plastic Man: That guy seems to know an awful lot about how the underworld works… and he’s funny!

Zee (Zanna (Zatanna)): If the team comes across any magic villains that thought “magic” where some thought “black-ops” they will need the earth’s best magician who doesn’t lock themselves in a tower they never leave!

The Question: A street level detective with a eye for the big picture, he’ll make sure the team knows the street and maybe solve the mystery behind the sinister aglets!

For starters, John Constantine is a must. Swamp Thing and Zatanna are staples too. Then we can get weird… I’d elevate Raven to the team- if Cyborg can be in the Justice League, why can’t she? Then throw in Mera with her deep sea magic, and Vixen with her mystical Tantu Totem.

And sure, throw The Question in there for good measure. No powers, but you need a guy who can get nuts.

I would keep Zatanna and Constantine. Then add the Spectre, Dr. Fate, and Ragman.

Ooh, Shazam would be a good, and a more lighthearted edition. It would be fun to see him alongside someone like Deadman.

These three are basically the trinity for the JLD the same way that Superman, Batman & Wonder Woman are the trinity of the Justice League, it just doesn’t feel right without them.

Swamp Thing I think is also a good one, someone who would have some knowledge of the Green and by osmosis all the other primal forces of the Earth.

Shazam would make for an interesting addition – with his deep connection to magic now, I think it makes sense that he would have to have some say in the affairs of it, plus it would be interesting to see this young, more idealistic kid deal with the often horrific problems that the JLD is called to solve.

Raven would be really good, she could school even Constantine in some manners of demonology. Plus, I think it’s just high time for her to be able to graduate from a Teen Titan to a member of the Justice League.

I would pick Shazam , Constantine, Zantana, Estrin the demon( think I totally misspelled his name) Hawkman, and Raven and last but not least yes a tag team Blue Beetle and Booster Gold. That’s my Justice League Dark team

I would keep John Constantine and Zatanna on the team. Thinking outside of the box I would add Mr. Mxyztplk, Raven, Pariah, and Huntress.

I like the addition of Wonder Woman on Tynions run. So my team would be: Wonder Woman, Zatanna, Constantine, Detective Chimp, Swamp Thing, Etrigan, Ragman, Raven and Doctor Fate. The only complaint I have about team up books like the Justice League, JLD and even marvel teams like the Avengers is I like to see the line up switch between story arcs. Like it doesnt have to be the whole team but take out some characters and bring in others for an arc or two.

I would probably have the three mains of Constantine Zatanna and Swamp Thing
Others will be Etrigan. He just awesome plus who does enjoy his rhymes. Either Martian Manhunter or Miss Martian. I feel the shapeshifting space ways would be really interesting for the JLD team.

Plus, when the fit hits the shan, you just can’t beat having a guy on your team who can transform into a humanoid marshmallow. “Let’s get mushy…and magical!” would be Pete’s new battle cry.

That’s the primary team, but Mr. Mxyzptlk may show up once in a while too. Villain? Ally? Neutral observer? Tune in, same JLD-time, same JLD-channel to find out.

Mr. Mxyzptlk may show up once in a while too. Villain? Ally? Neutral observer?

I think he would bring a certain level of chaos as you never know what is up his sleeve.

Can’t think of a single wildstorm character to shoehorn here, but I can get out of the box.

@Wildstorm-Jeff Elijah Snow could be a fun Wildstorm shoe-in, especially if he developed a fondness for Zee.

Void would also be a fun addition, as she’d be the first cybernetic member of a JLD roster.

Can’t think of a single wildstorm character to shoehorn here, but I can get out of the box.

jason blood
enchantress
…
i’ll think about it some more

i just don’t like constantine as a team player. he should be a chaos element. maybe he could show up with klarion controlled with a binding spell and everybody hates it

Team is led from afar by a depowered Spectre who needs them to carry the torch of vengeance against horrid wrongdoings until the mystery of his lost powers is solved.

I’ve mindwiped on voodoo ever since I read her 4 issue mini, it was far from good