DC Celebrates 80 Years of Green Arrow With a 100-Page Super-Spectacular! 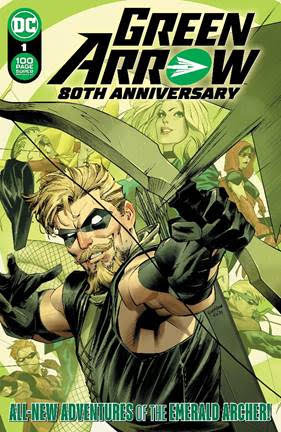 Time to dust off your Boxing Glove arrow, fire up the Arrowcar and join DC in celebrating eight decades of emerald excellence! On June 29, the Green Arrow 80th Anniversary 100-Page Super Spectacular #1 brings together some of comics’ greatest storytellers to pay tribute to Green Arrow’s legacy and the heroes and villains that have fought aside and against him.

Since his first appearance in More Fun Comics #73 in 1941, Oliver Queen, a.k.a. the Green Arrow has been one of the premier (and loudest) characters in the DCU, always at the forefront of where the super hero genre is headed as the eternal champion of the underdog. This over-sized anniversary issue follows in those footsteps, combining an all-star line-up of Green Arrow storytelling legends such as Mike Grell, Jeff Lemire, Phil Hester, Otto Schmidt, Ben Percy, Tom Taylor, and Devin Grayson alongside new Green Arrow contributors, including Stephanie Phillips, Mariko Tamaki, Ram V, Vita Ayala, Nicola Scott, Chris Mitten, Laura Braga, Max Fiumara, Brandon Thomas and others to pay homage not just to the Battling Bowman, but Ollie’s partner-in-crime fighting Black Canary, Connor Hawke, Arsenal, Red Arrow, Speedy, Onomatopoeia, Count Vertigo and more!

Featuring a breathtaking cover by Detective Comics artist Dan Mora, this can’t- miss collectible will also feature an incredible selection of “decade” variant covers, courtesy of some of the best artists in the business:

See what the past, present, and future have in store for Green Arrow his allies, and his enemies when the Green Arrow 80th Anniversary 100-Page Super Spectacular arrives in comic book stores and on participating digital platforms on Tuesday, June 29, 2021, for $9.99.

Are you going to grab up a copy of Green Lantern: 80th Anniversary? Let us know in the comments below!

I’d like to see the variant covers. I do love GA, so even though 10 bucks is a bit steep, this is probably coming home with me on June 29th.

Until then, glad Ollie is getting an Anniversary Special!

On the topic of Green Arrow, I just finished re-reading Brad Meltzer’s excellent ‘The Archer’s Quest’ and now I’m revisiting the final arc for Ollie in the 1987 series (the issues that introduce Connor Hawke ahead of passing the torch to him). It’s a shame the majority of Connor’s run is missing from the service – and that Mike Grell’s only goes up to issue 25 before skipping ahead to his final issue. Having all 137 issues on DCU Infinite would be a great 80th birthday present for the Emerald Archer and his fans.

Definitely interested in the Mike Grell story. Loved his run. I had no idea Green Arrow has been around for 80 years!

Oh hell yeah. I’m probably getting two so I can ship one to my father, but the question is do I wait for the variants or play roulette with my LCBS?

My boy Connor Hawke has returned!! I just hope they remember to give him the right skin tone. He gets whitewashed way too often. I also wonder which team is doing his story?

Both him and Red Arrow (Roy) were around for decades before getting a “Green Arrow” titled book. They first appeared in the same issue of More Fun Comics that Aquaman did. (Same series that brought us The Spectre and Doctor Fate.) Leading Comics started later that year, launching them to a higher profile as part of the Seven Soldiers of Victory.

I will be picking this up but I have no idea what cover I will be getting.

I’ll definitely be picking this one up! Hopefully this will be a lead up to him having his own series again.

This is so far turning into a great year!

I’ll be picking it up for sure.

Looking forward to seeing the variant covers. That was the one of the best parts of the last bunch of anniversary specials.

Thanks for the link! I just read it and I am glad I did. My favorite two things:

Check out the Arrowplane! It’s actually just a car, but it comes equipped with an ejection seat so he can be tossed to the top of a building. 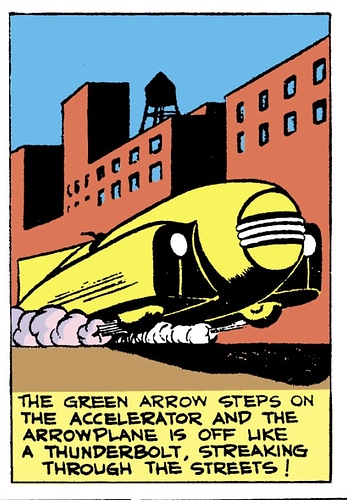 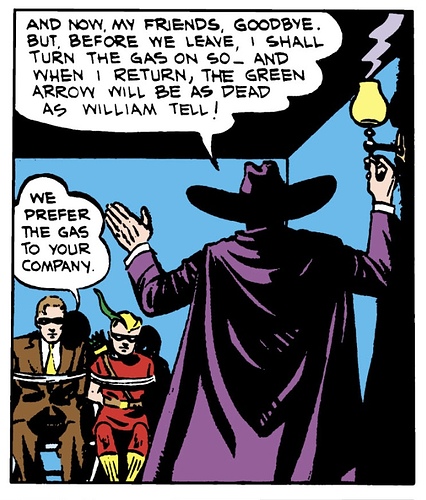 The “arrowplane”-- indicating great speed, and the arrow car, existed before the named specialy-designed Batmobile. As did an actual Arrowplane before the named batplane. Though batman did have cars and flying machines, or course. And who had a specifically named cavernous headquarters first? It wasn’t Bruce.

Feels like the gauntlet is being thrown down on this!

And waitaminute, I just noticed something:

It isn’t even green!

Green Hornet had his car, the Black Beauty, first of all.

I think its always been yellow