Crisis On Earth 1 The Sequel

Join Our DC Mafia Game: Crisis on Earth 1 Heroes VS. Villains: The Sequel!

Game is in session! 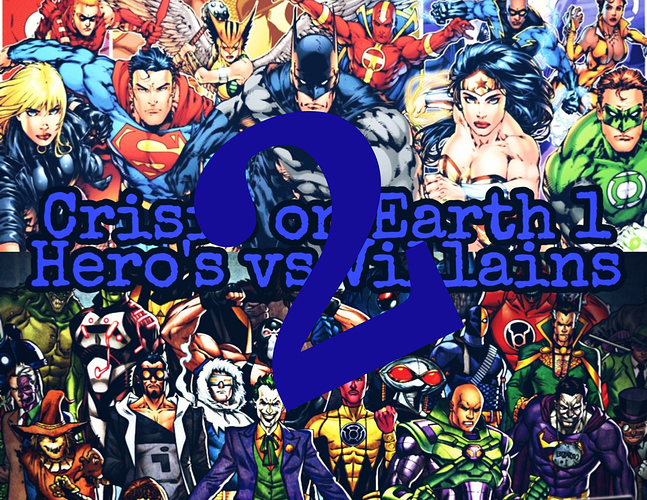 In a world where the villains have taken over it is up to our heroes to take it back!

Welcome to Crisis on Earth 1 The Sequel!

This time around we are going to play a little differently…

I am adding a helper GM! Meet @Rainstormriddles! You may know them from the original game. However, this time around they are helping me with this game as they brought the idea up to me!

From the rules I bet you figured out the target of the game, if not I will explain!

In this sequel the villains have taken over the entire world; essentially a no man’s land. While our heroes have either been killed or locked away. It is now illegal to be a hero! All heroes will be locked away to never see the light of day again. However, if during the night a villain was to be caught; they would go into the secret underground prison the heroes have made. After all, heroes don’t kill… Or do they?

Our villains this round…

Lex Luthor - The Dictator, he has the ability to bring back a villain from the heroes, or he can bring himself back. This can only be used once during the duration of the game!

Doomsday - The Master Destroyer, he is able to destroy lairs of both villain and hero. His ability is completely random. Making it difficult for him to control but it can sometimes come in handy if he finds a hero.

Grodd - King Of The Apes, he is able to use his telepathic abilities to control and take over the minds of regular humans. Using them to investigate other players.

King Shark - King Of The Oceans. He is able to talk to the other undersea dwellers to figure out where the prison is. enabling the villains to get back 2 of their cohorts. However this can only be used once.

Bane - Master Of Tactics, he is able to come up with a plan to help the villains without giving away his player identity. Note this can only be used once and this will automatically make this player susceptible to being captured by the heroes.

Captain Cold - Neither Here Nor There, seeing as he fits in both categories of hero and villain he is able to be recruited by The Flash. However, if he chooses to be on the side of the villains he can figure out who the flash is.

Killer Frost - Frosty Girl, She is able to freeze a character rendering them useless for the day time vote. This can only be used twice.

Solomon Grundy - Born On A Monday, he is able to bring himself back. This can only be used once.

Cheshire - The Cat, able to use her abilities the league has given; she can easily track a character protecting them from the night attacks.

Cupid - The Love Arrow, with her arrows she can entrance another player making their ability blocked.

Deathstroke - Trigger Finger, if targeted by the heroes he is able to kill one of them. Except for Superman.

Scarecrow - Dr. Crane’s Chemicals, using his fear toxin he can block a player’s abilities while also invoking them to tell him who they are. This can be used 4 times.

Brainiac - The Cyber Spy, his ability is to track and if he so wishes to protect. However, if he decides to track he is able to figure out that player’s role.

General Zod - World Dominator, He is immune to night capturing unless it’s by superman.

Livewire - Electric Current, she is able to turn herself into a current that tracks 1 of the characters blocking their abilities.

Superman - The Man Of Steel, he is immune to all abilities. Except the day voting poll. Also is the only character that can successfully capture General Zod

Hawkgirl - The Mace Wielder, she is able to attack 2 villains in one night. However, this can only be used once.

The Flash - The fastest Man Alive, using that speed he is able to get 2 votes in during the day poll. He is also able to talk his way into getting Captain Cold onto the hero side. However if this doesn’t work the player gets outed as a hero.

Green Arrow - The Emerald Archer, using the arsenal of arrows he is able to track a villain. To figure out who they are. He also has an arsenal of smoke bomb arrows if a hero is targeted by the villains he can use it to block that target and get away.

Black Canary - The Songbird, using her abilities as not only a high pitched sonic sound she is able to destroy a villains lair.

Welcome one and all, and best of luck! I’m here to help out any way I can! Feel free to message me anytime!

although i won’t participate in this game (rip my character) i would like to wish everyone good luck! it’s a very fun game to participate in

Yep, it is super fun, good luck everyone participating this time!

Don’t everyone run out on us! We still need some players!

I’m s o t e m p t e d to join but I want to give new players a chance to play as well. (and im behind on comic reading rip) If there are still spots left after awhile I’ll definitely come back.

Also if your nervous about joining and see this PLEASE JOIN it’s a great way to get to know the community and a great distraction from the stresses caused by the virus.

I’ll hold ya to that!

Can I play too?

Upon seeing and reading this, I’ve decided that this game looks fun, and I would love to join this one instead of the other one, if that’s okay?

Yup that’s why I am giving everyone who asked to be in the original the choice!

@bladexoxo if spots are ever needed to be filled in either game, please just let me know.

Will a hero know who the other heroes are?

Yup! Just like the last game! except the roles are flipped!

Oh goodness @Applejack be ready everyone it’s going to blow up in here!
Thank you @Applejack!!