So i binge watched Constantine and i’m heartbroken that it only made 1 season. I love everything about it and so many hints of nostalgia. Why did it only last 1 season, a part of me feels like it was the films fault, people were probably like oh Constantine that one film during the bloom of vampire and werewolf films, nah im over it? The cast was great, the story telling was on point.

The people weren’t ready, do you think we will ever get a season 2? Now would be a perfect time for a comeback for season 2 with the Infinite Earths Crisis Crossover teasing him. 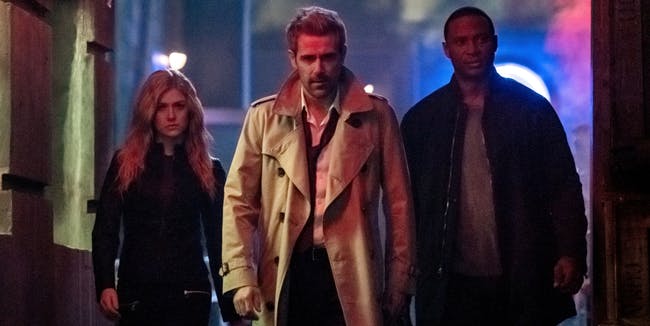 I mean the movie came out almost 10 years prior, so I doubt that was the reason. I could see the CW reviving it somehow, it would just depend on what NBC/the production team from the TV show still have rights to. He’s a main character on Legends of Tomorrow, he’s been showing up in the Arrowverse since Arrow season 4.

when people say Constantine they think Reeves, that’s just what sticks, so even if it was over 10 years ago the association is already there. Its the same concept as why some celebrities get typed cast based on the role they become known for. Like Edward and Katniss and Legolas etc. (what faces pop in your head with those names?)

No face popped up for any of those names. I guess because I read them all before I watched them.

I can understand what you’re saying, but no one that saw a commercial for Constantine the TV show chose not to watch the show because of their idea of the movie. General audiences that watched the movie liked the movie, so if anything that would be a plus not a negative. It has a 72% audience score of RT.

Mostly, I just think it wasn’t a right fit for NBC. The audience was much younger than the ones for their other shows and so they didn’t provide the live numbers NBC wanted and they weren’t who their ads targeted.

with how thing are now, so many books are read after the film adaptations. It happened with Harry Potter, Twilight, Lord of the Rings Etc.

Yeah i think it would succeed now, it would be the time for it. I never saw it advertised ever, so im bummed it took me so long to watch it.

I think Constantine would work better now on the CW, Netflix, or DCU. It just wasn’t right on NBC.

The movie was absolute garbage. An american shouldn’t even playing him in the first place. Matt Ryan portrays constantine better than any actor I’ve seen portray a character. He is constantine. The show was gold.

The movie wasn’t great, but I found it to be enjoyable enough on it’s own merits. Granted, it’s not a very good adaptation of the source material, but, as someone who doesn’t care for the source material, that didn’t matter very much to me. I don’t really get the appeal of the character.

The show was great once it got a couple of episodes in and found its legs. NBC was not the right place for it and it would probably have survived had it been on CW or Netflix or whatever.
Saw the movie for the first time here a couple of months ago. It’s enjoyable enough, it’s just not really Constantine.

My brother was playing Assassin’s Creed earlier and I heard the voice actor for one of the characters. As soon as I heard it, I turned to my brother and said, “That’s John Freakin’ Constantine!”
I had to elaborate after that and told him it was Matt Ryan, the best Constantine ever. Then he said, “Oh, that’s that annoying British guy. I was wondering where I had heard that before.” My heart was broken.

I totally agree , I also feel the film lacked any of the feeling that pulled me into the Constantine universe

I throw this idea around every time I see a Constantine topic. Here it is…no season 2 for Constantine. Instead, a justice league dark DCU original. All it needs for the first season is the currently casted Constantine (who is awesome) and we get Swamp Thing in there (hopefully they atleast still have the costume) and boom. We got a season 1 where they can atleast explore the topic. I keep saying it. I have no idea if I will get it. But we already have casted and costumed characters for the show so it’s a bit easier than starting from scratch.

If they ever decide to do a season 2 it should also include swamp thing, zatanna, and most definitely Lucifer. I mean they can use Constantine’s regular accruing roll in legends and use that as a jump off for a new season. Idk, those are just my thoughts, Constantine is a great character and needs to be brought back into the spotlight in a big way.

I think it was great as well. I hate how it ended. I would have been completely content with a second season. What I loved about it was how they adapted some of the comic stories into a television show rated TV14. There was Feast of Friends and my personal favorite was the Wedding.

I feel like the reason that it did not get a second season is because NBC didn’t really believe in the success of the series. Some of the actors didn’t even show up for some episodes and they had some “reasonable” explanations like Chas being with his daughter or Zed being at an art class. Despite all of that, it was a great series.

same boat i was like this was only one season WTF!?

Maybe they’ll address it in the new Hellblazer series?