Hey all! I’m still experiencing an issue that had been mentioned in the past, but I sort of assumed it had been fixed…

When I click on the Comics tab, sorting A to Z, and scrolling through all of the titles, getting all the way down to “Superman”, then click/tap on it - when I back out, and go back to the full list, instead of continuing on where I left off, in the “S” with Superman, I’m popped back up to the very top again. Now, to see the titles from “Superman” to the end, I have to do a bunch of scrolling to get back to where I was.

Anyone else still experiencing this? This seems like an issue that may have slipped through the cracks…

I’m so sorry to hear this is still an issue! I’ll pass this along to the team, but can you also send a message to our Support Team? Make sure you let them know the device and app info that you are using.

So, I just got a response, and it read as if they thought I was making a feature suggestion, and not reporting a bug/issue… is that a standard response?

I can’t say for sure if that is or not. However, I can make sure the dev team is aware of the issue.

Search results truely lacking. I’m watching Titans season 4, so I figure why not read some Brother Blood too. I search “Brother Blood” and get almost none of the issues with Brother Blood. Blood brothers, Superman Doomed Wonder Wooman Blood, Fresh Blood but no New Teen Titans 21+,40+, etc. i did notice that when i searched a second time it added more. But that was already after i added stuff to my reading list i manually created by searching with Google.

This problem isn’t new; i have had it with other topics. The season just came out. Dont you think there should be some suggestions to link readers to those books.

DC has dropped the ball with cohesivness. Peacemaker is on the home page. That show has been out for a long time.

Now on Justice Society of America (2006) scrolling only goes through issue 19.

I’m actually not entirely sure for the reason of that being, so for now I’ll get it passed along as a content error to be looked into. Thanks for the report!

I’m having a similar problem with the Flash series (1987-2009) where it only goes up to issue 14. It also defaults to the ULTRA books on the first screen (which is a constant issue with other series).

EDIT: After reviewing a few other series, the problem that I and @MatthewHecht are having only seems to occur on pages that DO have the “Omnibus” as the first screen that appears, rather than “Issues”.

(P.S.: also noticed several issues that say “Read only with ULTRA” even though they’re definitely accessible to non-ULTRA users. For instance, Secret Society of Super-Villains #12 is one of them.)

Currently experiencing this problem on my iPad 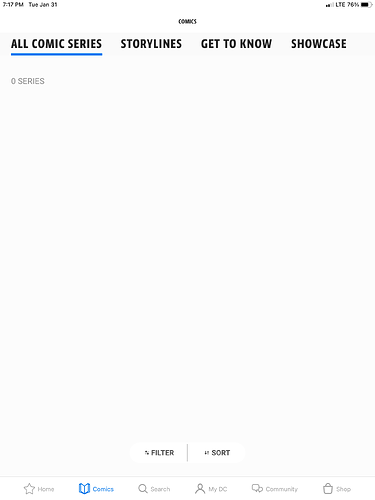 Hey @EtrigantheDemon, I’m sorry to hear you’re experiencing this issue. Unfortunately, the moderator team does not have access to specific account details or the technical systems.

Please reach out to our Technical Support team at:
yourdcu.com/submit. They’ll be able to help you get this sorted out as soon as possible!