I though it’d be fun to do a collecting-based polls thread, so let’s start out with one that’s rather topical, given its latest trailer just debuted.

If you’re inclined to purchase merchandise based on next year’s movie The Batman, who would you most likely be inclined to buy it from?

To the polls, Robin!

Love this idea for a thread Vroomy.

I voted McFarlane because:

Granted my level of interest in merchandise for this movie will probably limit me to the Batman Multiverse figure, but excited to see some high quality collectibles.

Also, curious to see what Iron Studios have in store. Their DC work of late has been

Love this idea for a thread Vroomy.

I’ve been kicking the idea of a collecting polls thread around for a while, now. That new trailer for The Batman sealed the deal, though.

You know I’m not much of a statue guy, by and large, but the price and sculpt of that GL Batman has my attention.

If they keep up the affordable statues, I might just become a statue guy.

Given how much I like of what I’ve seen of Kravitz’s Catwoman, her figure will likely be the first The Batman-related Multiverse figure I snag.

I’m a big fan of Spin Master including vehicles and playsets in their DC output, so that’s one reason why I’m slightly more interested in what’s been seen from them on The Batman front, so far.

Plus, they have at least two Penguin figures coming, whereas McFarlane has none (yet that is, and I bet that will change).

Conversely, McFarlane has a Riddler coming, whereas Spin Master doesn’t (and again, I’m sure that will change).

For me, the best product out of The Batman so far has been the Batcave playset by Spin Master.

You get Batman, Penguin, a Batcycle, multiple display pieces big and small (including storage for Batman’s cowl and chest armor

Not figure-related, but the Lego set with Catwoman and Batman looks pretty neat as well.

I haven’t bought Lego in nearly a couple years, but I might snag the Bat/Cat set at some point.

You know I’m not much of a statue guy, by and large

I know. We have different collecting habits with a nice sweet spot of an intersection.

I like Spin Master’s stuff. I was knee deep in Heroes Unite with some Batman stuff mixed in, until they stopped offering new Heroes Unite figures. Hoping that changes in 2022.

Reminds me, I need to get some figure stands for the little guys. I found they topple easily when on display, which is why I stashed ‘em.

I’m all-in on wanting Heroes Unite to continue, as it’s a great line.

I see it being done though, especially in a year where we’re getting (at minimum) Aquaman, Batman and Black Adam movies, along with new animated Superman and Batman TV series as well.

Something has to give, and the line that is a grab bag of comic stuff is the most likely to go.

I just want Spin Master’s Brainiac (seen at Toy Fair 2020) to finally see the light of day. A Lobo vs. Firestorm two-pack would be swell, too.

The upside is that whatever they do should be in the 4-inch scale, so other characters can mingle with those of Heroes Unite just fine, scale-wise.

On the Batman side, I had thought the existing Batman line was done, but it still has a wave of 4-inch figures to go (and a new wave of 12-inch is showing up, too), and with The Batman coming, I bet Spin Master will want as much Batman product on-shelf as they can get.

With McFarlane releasing Aquaman and Martian Manuhunter in March we’re inching closer to a standard comics Justice League lineup (I know MM is New 52, but I’m counting it anyway). Who would you like to see next?

For other, I’m gonna go ahead and add in 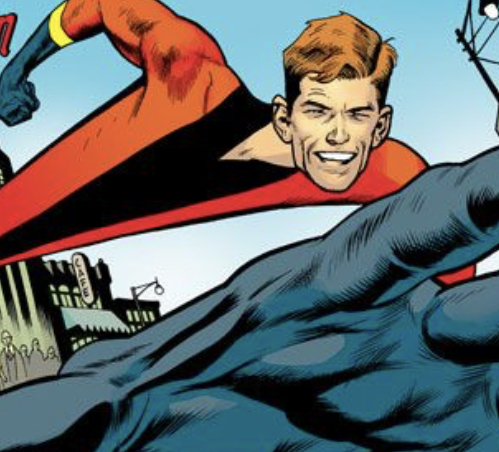 Is that Elongated Man? I’m used to seeing him in purple-ish suit.

Yup, that one I shared is his classic duds

In the Superman poll above, I really meant to show this Spin Master figure: 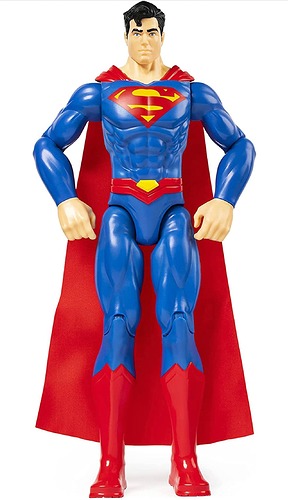 instead of this Mattel figure:

I never liked how the latter’s boots went all the way up to the knee. Oh well, close enough I guess

Regarding your Multiverse poll @moro, I’d most like to see:

She’s the A-lister with the most variants, of which, none are a vanilla, comic-based iteration.

Any version, but a two-pack of his initial New 52 forms would be great.

Like Diana, in that he has multiple figures, but no regular comic version yet.

With Black Adam on the way, now’s the time to start integrating JSA heavy-hitters into the line.

Regarding the Superman poll, a favorite larger figure of mine is Jakks Pacific’s Fleischer Superman, from their Big Figs line.

He was a repaint of their standard Superman, and the first action figure of the Fleischer Superman.

He’s 18", so he’s beyond your scale parameter, but he’s a very snazzy larger Superman, all the same.

BigFigs were cool. There was a cloth goods suit version of Supes that I almost bought. 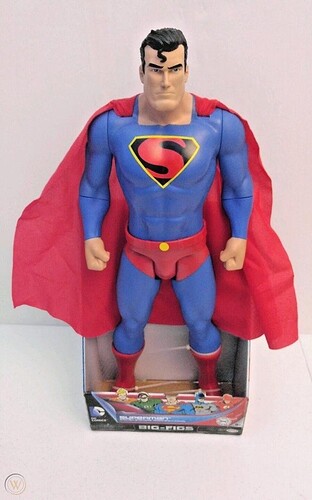 If memory serves, the Big Figs with cloth outfits were Amazon exclusives.

They were well-done, and came in beautiful packaging.

The drawback was the price. I wanted a few of them, but when I saw their individual prices, I said “Nope, not worth it for what you get.” and passed.

She was in Justice League Unlimited TV show

I should have remembered that. Been years; maybe time to rewatch.

The two all-time, absolute, unequivocal, greatest DC toy lines ever and I chose:

I may only have 7 figures from the line so far, but through Christmas catalogs, toy magazines/books (especially the photo guides put together by Tomart’s Action Figure Digest), online resources and drooling over them at toy shows and specialty shops as a child and an adult, this line has been a perennial favorite of mine since I was 7, and first saw Super Powers Batman, Clark Kent and friends in a 1986 Sears Christmas catalog in 1990.

DC Universe Classics OTOH, I have many figures from and I love that line to The Source Wall and beyond.

The Four Horsemen are all-time greats in the world of action figure design and sculpting (having originally worked at McFarlane back in the mid-'90s), so to see them work their magic not only on DCUC, but the 2003-2004 Batman line, DC Super Heroes, DC Universe Signature Collection, DC Multiverse and more in the 6-inch scale was a dream come true.

DCUC however is the cream of the crop in Mattel’s 6-inch DC oeuvre. There were great lines before and after it, but that one soared to the stars and beyond with its character variety, design and overall sense of fun, because let’s remember, toys and collectibles are fun.

Ultimately, Kenner wins the day. They’re considered by many to be the greatest toy company of all time (there’s a reason why Hasbro is still using the Kenner branding on modern product when the company was shuttered in early 1999) and the Super Powers Collection is but one of many reasons (DC and/or otherwise) as to why.