Possible confirmation? Or just a sneek peak at Noami Season 2? You decide! 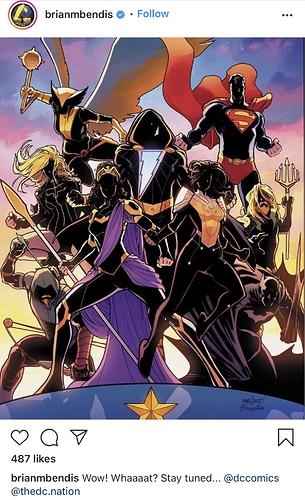 I get the feeling he’s taking over Justice League after Future State. Although I’d prefer Naomi Season 2, I’m excited to see where things go!

Please no. I am very much not a fan of Bendis. If he does have the flagship title, I hope there’s at least a secondary JL book besides JL Dark.

Naomi on the league interesting.
I might be Adam for Movie promotion but it might be Shazam.
Is that Hypolita or Wonder Woman warring purple or some other Amazon. Overall looking like a nice roster.

Where are Barry, John, and Arthur? And shouldn’t Naomi be in the Titans or Young Justice?
If this is the next iteration of the Justice League, I am not impressed.

After years writing Avengers for Marvel, figured it was only a matter of time until Bendis took on the JL book

Aquaman’s in between Batman and Superman, but having no GL or Flash definitely feels wrong

Interesting mix. Black Adam was in JSA, so I guess it’s time for the big, big league now. Providing that is Black Adam, and not a silhouette of Shazam.

I like the idea of Naomi being on the team. I’d have thought she’d stick with Young Justice, but I don’t mind her on the Justice League either.

I’m glad Ollie looks to be on the team, along with (presumably) Black Canary.

Anyhow, I’m excited. Bendis did well on Young Justice, so I’m hoping he’ll do even better with our premiere team.

Providing that is Black Adam, and not a silhouette of Shazam.

Hood and cape are all black (given the silhouettes of the others, I imagine those would at least be colored white if this is supposed to be Billy), the lightning bolt insignia is curved (whereas Billy’s is straighter), and there’s a triangle on the belt (as opposed to Billy’s circle).

Plus I gotta imagine “Endless Winter” will have some kind of consequence, given DC felt the need to push it out while in the middle of a whole other event comic (which means that probably is Hippolyta in the image, too).

Don’t forget the Black Adam movie as well. I can see that being a determining factor in Teth’s addition to the team.

Oh absolutely! I’m fully expecting a Black Adam mini or ongoing to be announced soon to tie-in to that

I like Ollie and BC in the JL. Will miss having a Lantern, but hopefully DC has something big planned for them. 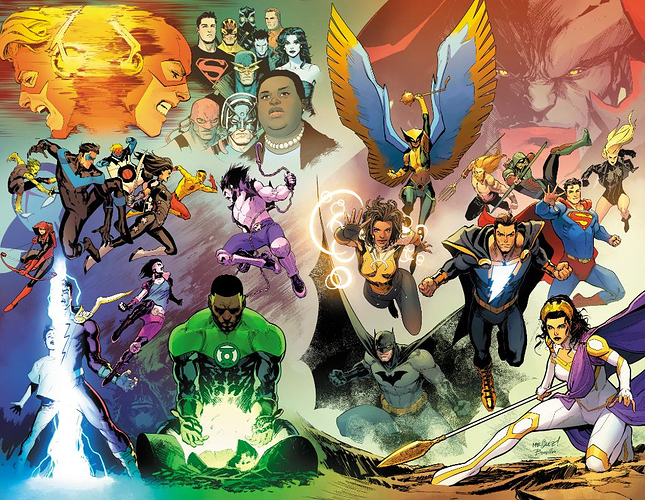 Either Diana got a new costume, or they’re really putting Hippolyta on the team instead of her,

I mean, it’s really hard to tell who that’s suppose to be, exactly, given that it doesn’t really look like Hippolyta either (other than the purple)? Guess we’ll just have to wait on an official announcement for that one.

It’s nice to see that Shazam isn’t being forgotten despite the fact that it’s his nemesis on the League instead of him.

I’m just wondering if his placement here means solo series or Titans cast member (or both)?

That said, how many issues before Adam betrays/breaks from the team?

This is Bendis writing. So 34.

Conner on the Suicide Squad?

Maybe? There’s another image of the Super family with him wearing a different costume, so it’s hard to say (Match?).

I like the combined Titans/Teen Titans lineup, though I wish they would’ve gone a little longer before fighting Lobo again

Crush is still around. I am happy.

Who the hell is that in the background of the top right corner?

Again, this is Bendis, so new villain with an underwhelming plan and backstory but nifty design.

I’m just wondering if his placement here means solo series or Titans cast member (or both)?

I figured if he joined the Titans (which would actually be pretty fitting), he’d be charging w/ the rest of them. This seems more indicative of a solo series

I’m interested in the roster. Up for Black Adam. Weird without WW especially on her 80th. Who the villain they’ll be fighting in the corner.

The Titans combo sound cool. Hopefully they more of a team and not just double crosses.

The squad is interesting unique roster. Up for it. Connor interests me.

John looks like he may having solo stories. Always up for more Stewart.

Overall interesting, exited and curious to see were it will all go.

This seems more indicative of a solo series

(Yes, I know it’s probably going to be whoever’s writing his Future State mini, but let me hope!)