I love the visual aesthetic of the movie, I love how ambitious the story is but overall I personally think it’s very convoluted and slow. I love that the movie has a mature almost Christopher Nolan tone at times but it’s just not as well written or paced as those movies.

Like others have said, I love the look of the film and the ambition of it – in a way, the story of Superman being beaten more by political spin-doctoring, espionage and the 24-hour news cycle is the most realistic take on the character I’ve ever seen, though I think they could have done more to balance the more classic take on him in there. It also has, without a doubt in my mind, the BEST take on Batman I’ve ever seen on the silver screen, and it can’t be denied that Wonder Woman’s introduction is one of the most hype moments in superhero movie history.

It has it’s problems with pacing and such, but I love it for what it tries to do, and I very much wish that Snyder and Terrio was able to finish their story. Really, that would have been best for both the lovers and haters of Snyder’s take on this universe – the lovers would have gotten to see the complete vision, and according to the original plan, it would have already been done by now and the haters would probably get to look forward to a different take by now.

If I had to pick a favorite DCEU move since 2013, it would be BVS Ultimate Edition.

If you can watch something this epic

, but sit there with your arms crossed 🙅, with a scowl on your face

, thinking “I hate this! This sucks!” you know you gotta be dead on the inside​ 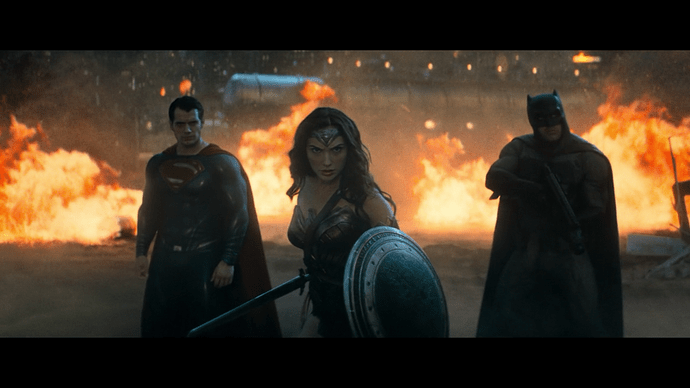 While I may have an overall differing point of view on the film as a whole, I will say it has the absolute best Batman action/fight scene to date imo. I am of course referencing that awesome warehouse fight between Bats and Lex’s militia goons…

Nope I think it sucks and it should’ve been a Worlds Finest movie.

I’ve always had good opinions for this movie. If I had one complaint it would be a killer Batman. That aside, I love the movie and love the extended version even more

I really like BvS. Even if it is long, but it pretty damn good. I would do somethings differently if I made it, but I’m still pretty happy with what we got.